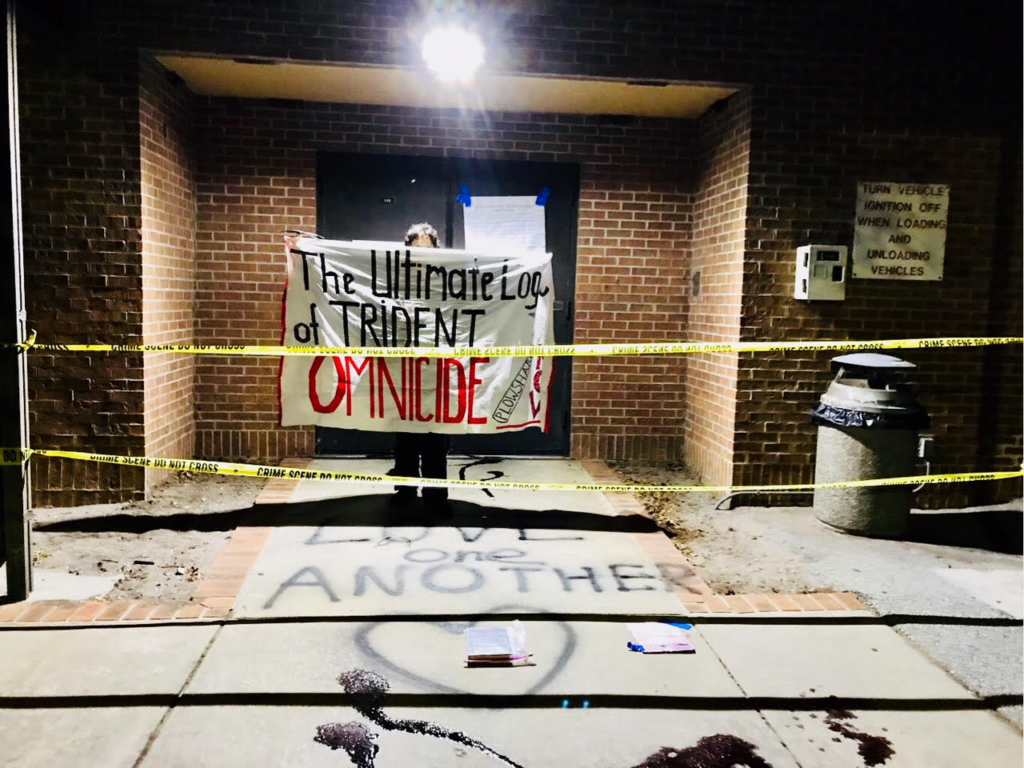 They entered on Wednesday night April 4.  Calling themselves Kings Bay Plowshares, they went to make real the prophet Isaiah’s command: “beat swords into plowshares”.
The seven chose to act on the 50th anniversary of the assassination of the Rev. Dr. Martin Luther King, Jr.  Who devoted his life to addressing the triplets of militarism, racism and materialism. In their statement, which they carried with them, the group quoted King, who said: The greatest purveyor of violence in the world (today) is my own government.”
Carrying hammers and baby bottles of their own blood, the seven attempted to convert weapons of mass destruction.
Kings Bay Navel base opened in 1979 as the Navy’s Atlantic Ocean Trident port.  It is the largest nuclear submarine base in the world.  There are six ballistic missile subs and two guided missile subs based at Kings Bay.
The activists went to three sites on the base: The administration building, the D5 Missile monument installation and the nuclear weapons storage bunkers.  The activists used crime scene tape, hammers and banners reading: The ultimate logic of racism is genocide, Dr. Martin Luther King; The ultimate logic of Trident is omnicide; Nuclear weapons: illegal – immoral.  They also brought an indictment charging the U.S. government for crimes against peace.
The activists at the nuclear weapons storage bunkers were Elizabeth McAlister,78. Jonah House, Baltimore, Steve Kelly, S. J.,69 Bay Area CA and Carmen Trotta, 55, NY Catholic Worker.
The activists at the Administration building were Clare Grady, 59, Ithaca Catholic Worker and .Martha Hennessy, 62, NY Catholic Worker
The activists at the Trident D5 monuments were Mark Coleville,  55, Amistad Catholic Worker New Haven CT and Patrick O’Neil, 61, Fr. Charlie Mulholland Catholic Worker Garner NC
All activists are being detained.  No one was injured.
This is the latest of 100 similar actions around the world beginning in 1980 in King of Prussia PA.
for more information Contact:
Kingbayplowshares facebook page
Paul Magno, 202-321-6650
Jessica Stewart 207-266-0919
Brian Hynes 718-838-2636