Russia Is Our Friend 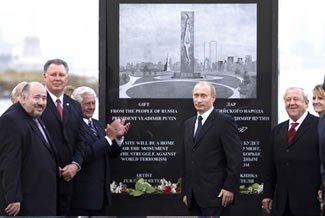 Last May I was in Russia when fascists held a rally in my hometown of Charlottesville, not to be confused with their larger rally which followed in August. At the May rally, people shouted “Russia is our friend.” I was on a Russian TV show called Crosstalk the next day and discussed this. I also discussed it with other Russians, actual friends in the human sense. Some of them were completely bewildered, arguing that Russia never had slavery and couldn’t be the friend of Confederate-flag-waving people whom they saw as advocates for slavery. (Anti-Russian Ukrainians have also waved Confederate flags.)

I don’t think slavery or serfdom was on the minds of the people shouting “Russia is our friend.” Rather they believed the Democratic/Liberal accusation that the Russian government had tried to help make Donald Trump President, and they approved. They may also have thought of Russia as a “white” ally in their cause of white supremacy.

I think there is a case to made that, in fact, in a very different sense, “Russia is our friend.” It’s a case that could fill volumes. I don’t make this case suffering under some delusion of the perfect saintliness of the Russian government, neither now nor at any time in history. In 2015, the Russian military approached me and asked if I would publish their propaganda under my own name. I told them to go to hell publicly. I’ve had Russian media censor my criticisms of Russia and highlight my criticisms of the United States (yet allow more criticism of Russia than big U.S. media allows criticism of U.S. foreign policy).

I make the following case because I think it is overwhelming yet fervently ignored. I’ll just note a few highlights.

While the United States and Russia were war allies during World War I, the United States, in 1917, sent funding to one side, the anti-revolutionary side of a Russian civil war, worked to blockade the Soviet Union, and, in 1918, sent U.S. troops to Murmansk, Archangel, and Vladivostok in an attempt to overthrow the new Russian government. They abandoned the effort and withdrew in April, 1920. Most people in the United States do not know this, but many more Russians do.

The threat of the communists, as an example, albeit a deeply flawed one, of taking wealth away from oligarchs was a driving force in U.S. foreign affairs from 1920 up to, all during, and long after World War II. Senator and future president Harry Truman was far from alone in wishing to help the Russians if the Germans were winning, but the Germans if the Russians were winning, so that more of both would die. Senator Robert Taft proclaimed an elite view, shared by some West Point generals, that a victory for fascism would be better than a victory for communism. Wall Street had helped to build up Nazi Germany. Without the help of IBM, General Motors, Ford, Standard Oil, and other U.S. businesses right through the war, the Nazis could not have done what they did. The U.S. government was complicit in these acts of treason, avoiding bombing U.S. factories in Germany, and even compensating U.S. businesses for damage when hit.

The Russians had turned the tied [tide] against the Nazis outside Moscow and begun pushing the Germans back before the United States ever entered World War II. The Soviets implored the United States to attack Germany from the west from that moment until the summer of 1944 — that is to say, for two-and-a-half years. Wanting the Russians to do most of the killing and dying — which they did — the U.S. and Britain also did not want the Soviet Union making a new deal with or taking sole control of Germany. The allies agreed that any defeated nation would have to surrender to all of them and completely. The Russians went along with this.

Yet in Italy, Greece, France, etc., the U.S. and Britain cut Russia out almost completely, banned communists, shut out leftist resisters to the Nazis, and re-imposed rightwing governments that the Italians called “fascism without Mussolini.” The U.S. would “leave behind” spies and terrorists and saboteurs in various European countries to fend off any communist influence.

Originally scheduled for the first day of Roosevelt’s and Churchill’s meeting with Stalin in Yalta, the U.S. and British bombed the city of Dresden flat, destroying its buildings and its artwork and its civilian population, apparently as a means of threatening Russia. The United States then developed and used on Japanese cities nuclear bombs, a decision driven largely by the desire to see Japan surrender to the United States alone, without the Soviet Union, and by the desire to threaten the Soviet Union.

Immediately upon German surrender, Winston Churchill proposed using Nazi troops together with allied troops to attack the Soviet Union, the nation that had just done the bulk of the work of defeating the Nazis. This was not an off-the-cuff proposal. The U.S. and British had sought and achieved partial German surrenders, had kept German troops armed and ready, and had debriefed German commanders on lessons learned from their failure against the Russians. Attacking the Russians sooner rather than later was a view advocated by General George Patton, and by Hitler’s replacement Admiral Karl Donitz, not to mention Allen Dulles and the OSS. Dulles made a separate peace with Germany in Italy to cut out the Russians, and began sabotaging democracy in Europe immediately and empowering former Nazis in Germany, as well as importing them into the U.S. military to focus on war against Russia.

The war launched was a cold one. The U.S. worked to make sure that West German companies would rebuild quickly but not pay war reparations owed to the Soviet Union. While the Soviets were willing to withdraw from countries like Finland, their demand for a buffer between Russia and Europe hardened as the U.S.-led Cold War grew, in particular the oxymoronic “nuclear diplomacy.”

Lies about Soviet threats and missile gaps and Russian tanks in Korea and global communist conspiracies became the biggest profit makers for U.S. weapons companies, not to mention Hollywood movie studios, in history, as well as the biggest threat to peace in various corners of the globe. The United States drew Russia into a war in Afghanistan and armed its opponents. Efforts at nuclear disarmament and diplomacy, which more often than not came from the Soviet side, were routinely thwarted by Americans. When Eisenhower and Khrushchev seemed likely to talk peace, a U.S. spy plane was shot down, just after an American who’d been involved with those planes defected to Russia. When Kennedy seemed interested in peace, he was killed, purportedly by that very same American.

When Germany reunited, the United States and allies lied to the Russians that NATO would not expand. Then NATO quickly began expanding eastward. Meanwhile the United States openly bragged about imposing Boris Yeltsin and corrupt crony capitalism on Russia by interfering in a Russian election in collusion with Yeltsin. NATO developed into an aggressive global war maker and expanded right up to Russia’s borders, where the United States began installing missiles. Russian requests to join NATO or Europe were dismissed out of hand. Russia was to remain a designated enemy, even without the communism, and even without constituting any threat or engaging in any hostility.

When Russia gave the United States a memorial in sorrow for the victims of 9/11, the United States practically hid it, and reported on it so little that most people don’t know it exists or believe it’s a false story.

When Russia has proposed to make treaties on weapons in space or cyber war or nuclear missiles, the United States has regularly rejected such moves. Russia’s advocacy for the Iran agreement meant nothing. Obama and Trump have expelled Russian diplomats. Obama helped facilitate a coup in Ukraine. Trump has begun weapons shipments to the coup government, which includes Nazis. Obama tried to facilitate an overthrow in Syria. Trump escalated the bombings, even hitting Russian troops. Trump accuses Russia — the one allied power not still occupying Germany — of dominating Germany, while trying to prevent Russia from selling its fossil fuels.

Russia is accused, and found guilty prior to convincing evidence, of shooting down an airplane, of “aggressively” flying near U.S. planes on Russia’s borders, of “conquering” Crimea through a popular vote, of poisoning people in England, of torturing and murdering a man in prison, and of course of “hacking” an election — an accusation which, if evidence is ever produced for it, will amount to far less than Israel does in the United States or than the United States does in many countries. Through all of these accusations it is not uncommon for the Russians to be referred to as “the commies,” despite the demise of communism.

What, you may ask, does any of this have to do with Russia being a friend? Simply this: nobody other than a friend would put up with this shit.