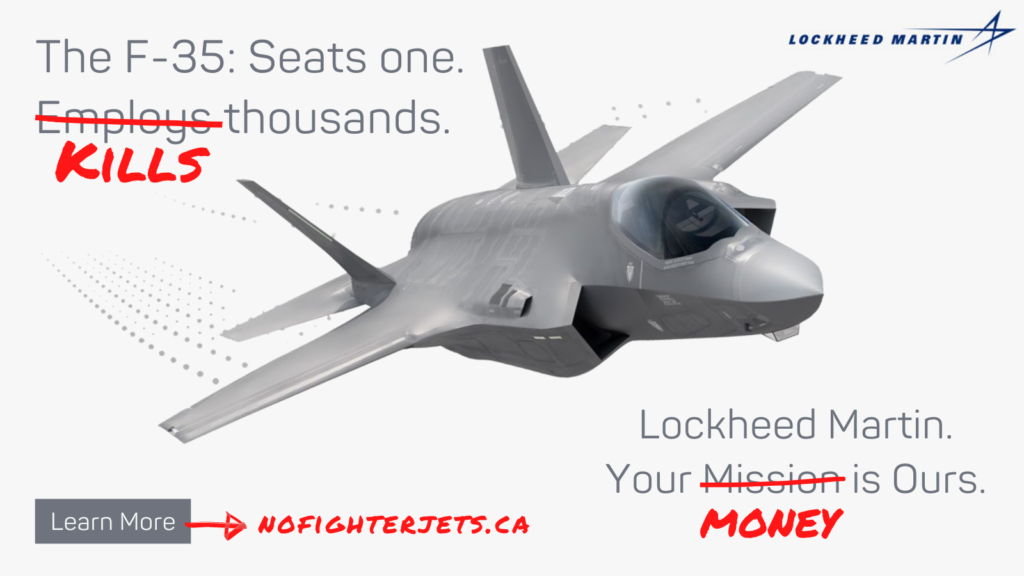 (Montreal) – Actions are being planned across the country this weekend to call on the Trudeau government to cancel its procurement of 16 Lockheed Martin F-35 joint strike fighters for $7 billion. The Canadian Press reported before Christmas that the Treasury Board had given its approval to the Department of National Defence to place the first order of F-35s and that a formal announcement would be made by the federal government early in the new year.

The “Drop the F-35 Deal” weekend of action will be held from Friday, January 6 to Sunday, January 8.  There are a dozen rallies taking place across the country from Victoria, British Columbia to Halifax, Nova Scotia. In Ottawa, there will be a big banner drop in front of Parliament at noon on Saturday, January 7. The schedule of actions can be found at nofighterjets.ca.

The weekend of action is organized by the No Fighter Jets Coalition that is comprised of over 25 peace and justice groups in Canada. In a statement, the coalition explained that it is opposed to the procurement of F-35s because of their use in war, harm to people, excessive costs at over $450 million per plane, and adverse impacts to the natural environment and climate.

Since its founding in 2020, the coalition has organized many actions, petitions and events to raise opposition and public awareness of the costly, carbon-intensive fighter jet procurement. The coalition released a cost estimate showing that the life-cycle cost of the fighter jets will be at least $77 billion and a comprehensive report entitled Soaring on the adverse financial, social and climate impacts of a new fighter jet fleet. Thousands of Canadians have signed two parliamentary petitions against the procurement. In August 2021, the coalition also released an open letter signed by over 100 high-profile Canadians including Neil Young, David Suzuki, Naomi Klein, and singer-songwriter Sarah Harmer.

The coalition wants the federal government to invest in affordable housing, health care, climate action and social programs that will help Canadians and not in F-35s that will enrich an American weapons manufacturer.

For more information about the coalition and weekend of action: https://nofighterjets.ca/dropthef35deal