PFAS Contamination: Telling Half The Story 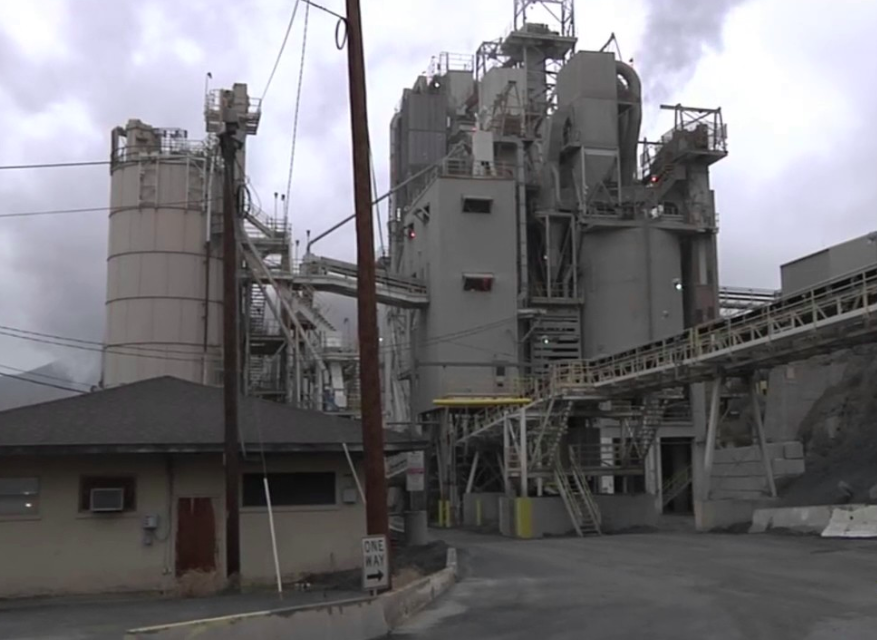 Last week, the California State Water Resources Control Board released data it has collected on PFAS contamination in wells across the state. Anyone reasonably informed about PFAS, who examined their raw data, would conclude that California water resources are in a terrible condition and that the health of hundreds of thousands of California residents are at risk by drinking the tap water.

The state tested for 14 of the more than 5,000 varieties of PFAS, including two of the most notorious varieties known to threaten human health, PFOS and PFOA. 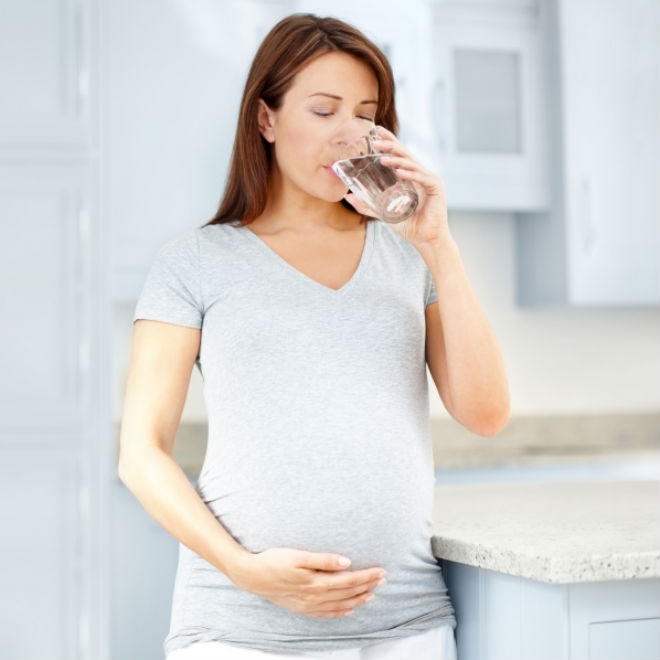 Pregnant women should never drink tap water with the tiniest amounts of PFAS.

The Water Board directs the public to this page on PFAS.  People are instructed to select the “Drinking Water” tab and then “Public Water System Testing Results,” but the new results on PFAS testing cannot be found this way. To find the entire PFAS database in excel format, the public must know what to look for or be directed by staff. To access the raw PFAS data, entering “First round of PFAS sampling” will result in the fifth entry containing a link to the excel spreadsheet: “PFAS Monitoring np TP.” The spreadsheet contains 9,130 rows of data, making it difficult for the water-drinking public to decipher – if they can find it.

Blair Robertson, the Water Board’s public information officer, did not return a call in time for this story, while callers to the water board office are told the entire database is unavailable.

Meanwhile, an interactive map incorporating the Water Board’s findings by the LA Times only presents data on PFOS/PFOA and fails to address contamination by other dangerous varieties of PFAS.

Although PFOS and PFOA are the most notorious varieties of PFAS, other complex PFAS chemicals may be even more harmful to human health in some respects. California tested 568 wells for PFOS and PFOA, along with these 12 chemical variations of PFAS: 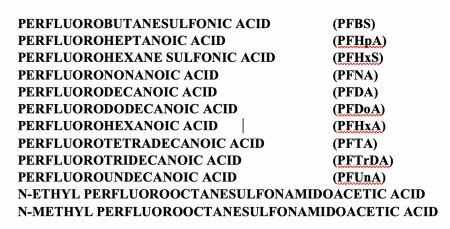 Don’t allow your eyes to glaze over. The consumption of these chemicals in drinking water at the tiniest levels may mean your unborn child will be defenseless against asthma or suffer from severe developmental or behavioral issues. Drink this water and it could contribute to testicular, liver, and kidney cancer, or reduced immunity to deadly diseases.

So it was disheartening to see the LA Times offer statistics to the public through an interactive map that only displays totals for PFOS/PFOA.

19,228 parts per trillion (ppt) of the 14 kinds of PFAS tested were found in those 308 wells. 51% were either PFOS or PFOA while the remaining 49% were other PFAS listed above that are known to have negative impacts on human health.

The U.S, Environmental Protection Agency, (EPA) has a non-enforceable Lifetime Health Advisory of 70 parts per trillion for PFOS/PFOA. When PFOS/PFOA levels top 70 ppt, wells are shut down in California, although other PFAS chemicals are not subjected to these limits.  Environmentalists warn that the EPA’s voluntary threshold is too high, claiming that drinking water should never exceed 1 ppt of any PFAS chemicals.

In the absence of a proactive federal EPA, states across the country are rushing to establish mandatory maximum contaminant levels (MCL’s) for various PFAS in the 10 ppt to 20 ppt range in both groundwater and drinking water. California recently established Notification Levels – only for PFOS and PFOA – at 6.5 ppt and 5.1 ppt in drinking water respectively. Notification Levels trigger certain requirements for water providers, although the public may continue drinking the water.

The spreadsheet below, taken from the Water Board’s data, displays the results of  23 California wells that tested higher than the EPA’s advisory of 70 parts per trillion for PFOS/PFOA. 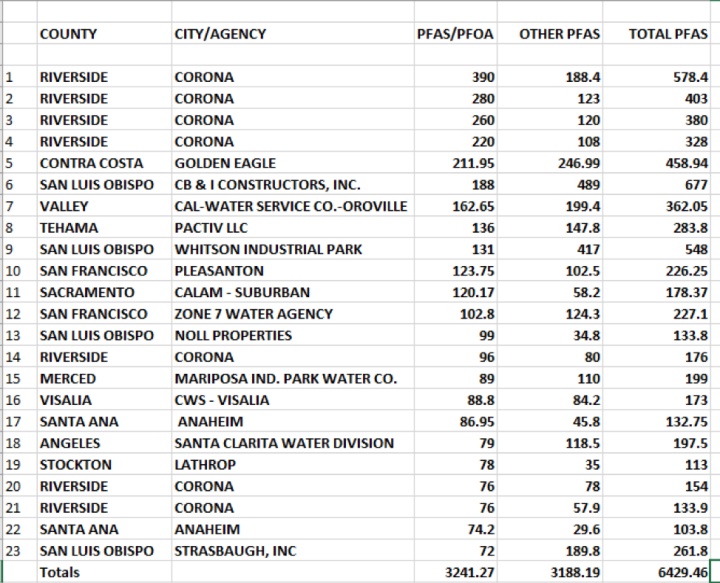 Of the 23 samples above, “other PFAS” accounted for 49% of the total. Seven of the most contaminated water samples were found in Corona, home to a 3M manufacturing plant.

The LA Times website instructs the public to enter the name of their town into a search bar. Doing so for Burbank yields the following map:

The LA Times graphic shows ten wells in Burbank with no PFOS/PFOA contamination, leading many to believe the well water is OK. The LA Times fails to provide the public with access to contamination caused by other PFAS chemicals found in well water.

A close examination of the buried spreadsheet shows these entries for Burbank: 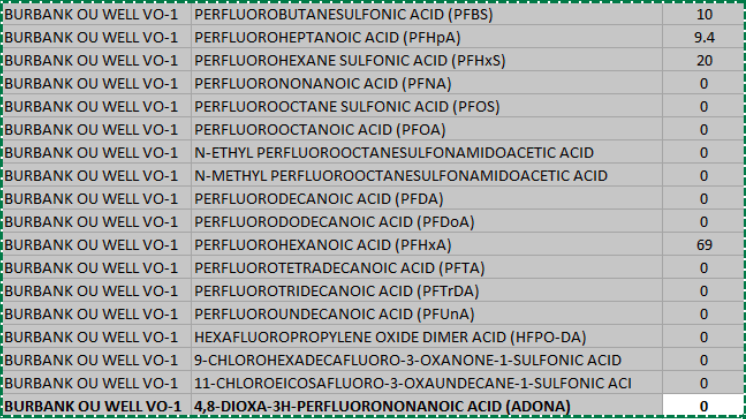 Burbank’s OU Well VO-1  is contaminated with 108.4 ppt of these varieties of PFAS:

Few seem concerned with these chemicals and that’s because the industry-friendly EPA has shown no concern. California must take the lead in protecting the health of its citizens.

These chemicals are dangerous, and their levels ought to be closely regulated and reported to the public by all states and the federal government.  Studies submitted to the Persistent Organic Pollutants Review Committee of the Stockholm Convention  report these finding for PFHxS.  (The U.S. has failed to ratify this important treaty.)

And that’s just one of the “other PFAS” chemicals in Burbank.  See the toxicological profiles for: PFHxA, PFBS and  PFHpA.

If someone lives close to wells with high levels of PFAS it doesn’t necessarily mean their tap water comes from that source, although it probably does. Also, if tap water comes from a utility with several wells, the public may not know the exact source of the water they’re drinking. People should begin communicating with their water service providers and pregnant women should never drink tap water with the tiniest amounts of PFAS. Most home water purification systems cannot filter out these carcinogens.

The California State Water Resources Board tested civilian airports, municipal solid waste landfills, and drinking water sources within a 1-mile radius of wells already known to contain PFAS. The military was not a focus of this investigation, although one base, Naval Air Weapons Station China Lake has contaminated a well at 8,000,000 ppt. for PFOS/PFOA, according to the DOD. Furthermore, the DOD reports that California has 598 military installations with 5,819 contaminated sites, although data for PFAS contamination at most of these sites is unavailable to the public.

Anna Reade of the Natural Resources Defense Council says the water board must broaden its narrow focus on PFOS and PFOA. “Concentrating on just two trees in a forest of almost 5,000 will compromise the State’s ability to both get a comprehensive picture of the problem or develop appropriately comprehensive solutions to the problem,” she writes.

It’s time to wake up and smell the coffee – in Burbank – and across the state. Just don’t drink it until you’re sure it’s not contaminated with PFAS chemicals.