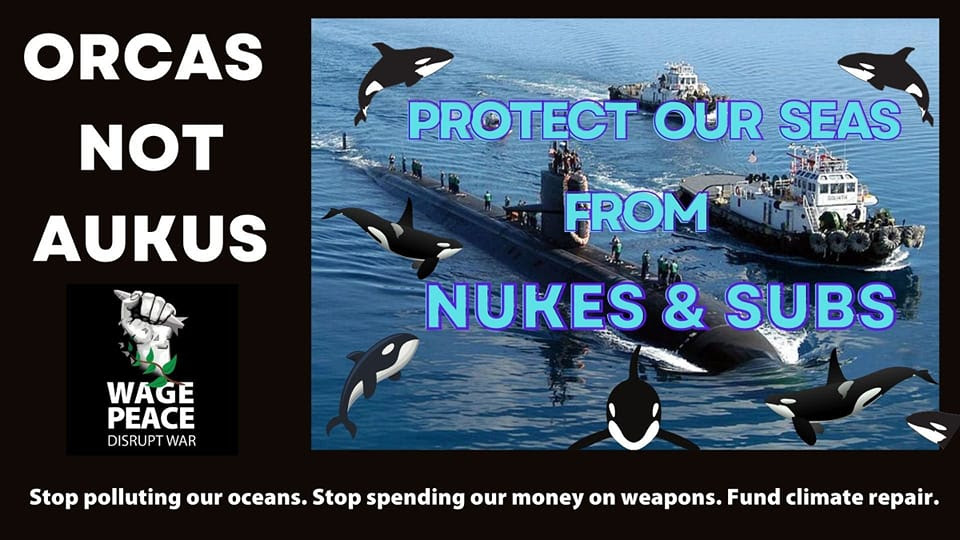 Graphic from Wage Peace added by World BEYOND War.

The New Zealand Government’s announced continuation of its anti-nuclear policy, which will ban any future Australian nuclear submarines from entering New Zealand waters or ports, has been welcomed by long term peace activists, the International Affairs and Disarmament Committee of the Aotearoa /New Zealand Peace Foundation.

“I personally sailed in front of the nuclear submarine Haddo and then, as Eden MP, voted for the anti-nuclear law’, says Mr Northey.

“It will keep Australian nuclear-powered submarines away from New Zealand as effectively and justifiably as it has kept nuclear-powered or nuclear-armed warships from other countries  out of New Zealand waters for the last 36 years, including those from China, India, France, UK and USA.”

Mr Northey says it is important to retain our ban on nuclear powered or armed warships.

“If we allowed any nuclear submarine into Auckland or Wellington Harbours a nuclear accident resulting from collision, grounding, fire, explosion or reactor leaks could have dire consequences for human and marine life and jeopardise shipping, fishing, recreation and other marine based activities for generations.”

This is why the JCPOA – the Iran nuclear deal – restricts Iran to producing only LEU (under 20% uranium enrichment).

Although Australia is not interested in using HEU to make a nuclear bomb, providing Australia, a state member of the Nuclear Non-Proliferation Treaty (NPT), with HEU (at around the 50% enrichment level) for nuclear-powered submarines, could open the floodgates to other countries acquiring HEU powered submarines in order to develop a capacity to then make a bomb.

This development could throw a spanner in the works of the upcoming NPT Review Conference early next year.

Also of concern is the fact that the new Australian submarines, while  not nuclear armed, appear to be part of an escalating political and military confrontation between the new AUKUS alliance (Australia, UK and the USA) and China following the adoption of the new AUKUS defence pact announced on September 15th. Such confrontation risks a very destructive war, is unlikely to resolve the differences with China and is immensely wasteful and damaging to building a peaceful, equitable and collaborative world.

Any concerns about China’s military activities and human rights record, need to be dealt with through diplomacy, seeking common security, the application of international law, and utilizing conflict resolution mechanisms including those available through the United Nations and the UN Convention on the Law of the Sea.

We appeal to the Australian government to re-think its approach, refrain from further conflict escalation, and give increasing priority to key addressing serious human security issues of today and tomorrow including  the COVID pandemic, climate change, famine and poverty, rather than pouring resources into Great Power rivalries which were so disastrous in the 19th and 20th centuries.

We welcome New Zealand Prime Minister Ardern’s reaffirmation of the NZ nuclear free policy and the New Zealand government’s primary focus on diplomacy, and we support those voices in Australia, including the distinguished former Prime Minister Paul Keating, which are calling on their government to re-think and reverse this decision.”