Over 200 Sign New Petition to Ban Militarized Policing in Charlottesville 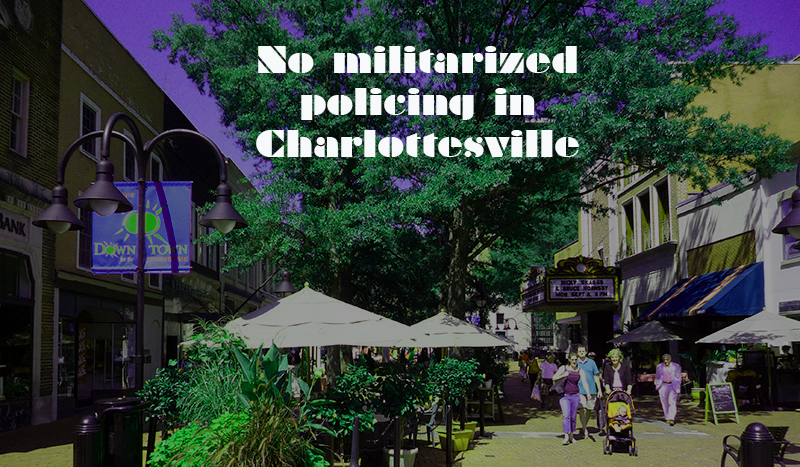 Over 200 people have quickly signed a new petition in Charlottesville, Va. at http://bit.ly/cvillepeace

Almost all of the signers are from Charlottesville.

The petition is addressed to the Charlottesville City Council and reads:

We urge you to ban from Charlottesville:
(1) military-style or “warrior” training of police by the U.S. military, any foreign military or police, or any private company,
(2) acquisition by police of any weaponry from the U.S. military;
and to require enhanced training and stronger policies for conflict de-escalation, and limited use of force for law enforcement.

Here are some of the comments people have added when they signed:

We need to set a good example.

I fully support this petition.

I am a City Resident.

We need the police, we greatly appreciate their service. We do not want to feel like we are in a police state, however. Police power should be adequate, but not militaristic.

We do not need or want the military in our streets. I say this as a former infantry officer. Soldiers are not trained for this work.

Durham, North Carolina, was the first US City Council to endorse such bans. Let’s make Chalottesville the second city in the nation and the first in Virginia!

I am afraid to demonstrate because I am afraid that the police will attack me. I am seventy years old. I would really like to see that change in my lifetime. I have been waiting since 1960; can the change please be now?

Here in the USA, the police are NOT the military, and they may not “play” like they are in the military. I no longer trust the police to protect the public, because I get the sense that most of them are on the white supremacist side of things and the “guilty until proven innocent” way of thinking. I feel like the police believe that they can do whatever they like and not be held accountable. Giving them military grade gear/weaponry is inviting a very, VERY dangerous situation. NO militarized policing in Charlottesville, or anywhere else in Virginia.

I appreciate this much needed action and all efforts to pursue this positive peaceful social change!

This is wonderful! Thank you to all of you who are responsible for putting this together.

To Cville police, yes demilitarize but also thank you for your peaceful, watchful presence on June 7 during the large, peaceful protest against any brutality against our sisters and brothers of color-well done. thank you

The sharing of military-grade accessories with a small town community police force is absurd. I dont want it

THANK YOU FOR INITIATING THIS!

No militarized policing. Period! The U.S. should not wage war on its own people, or any people anywhere!

Now is the time for Charlottesville to rethink policing. Stop the violence, stop the aggression against our citizens.

An idea whose time has truly come! Thank you!

The military and the police are not part of each other!!!

C’Ville is a peaceful, just city overall. Let’s make it even better.

The behaviors addressed in this petition were wrong when they started and they are wrong now. Police should be trained broadly in de-escalation rather than the ‘us vs. them’ style of conflict that occurs today. Let’s make Cville a shining example of what can be.

This is pretty sane town. Violence begets the same.

Especially at this time with all the emphasis on police brutality!

It is way past time to de-militarize police departments. It must be done now. It is also the time to train all police officers in the history of racism in this country. how rampant it still is, and how it has to stop.

Do police departments really train officers to “protect” EVERYONE?

Militarization of the police must be reversed. We do not want to live in an occupied country. The police should never be an instrument able to impose elite rule on the people. If they are allowed to exist they should be servants of the people not unaccountable private power. Demilitarization is a crucial first step in moving the United States beyond its oppressive political foundations.

This is not to voice distrust. It is to insure a community service attitude over an enemy-dominance-centric one too common elsewhere.

We do NOT want any police that act like the out of control militaristic fanatics armed with tear gas and exploding cans with rubber in them to use on peaceful protesters. Yes, I’ve watched the videos from Washington DC. The police are out of control and need to be reined in or fired.

The police are not the military and weaponry and trainings that simulate war are not beneficial.

Police are supposed to be peacekeepers not an armed militia to control citizens.

And no kneeling on people’s neck!

Militarized policing should never have happened in the United States.

Please keep Charlottesville at the forefront of this movement. The world is watching.

We need a STRONG PCRB like all the other states are forming.

I work in Charlottesville. I consider it my home town. Please, protect our citizens by demilitarizing the police. Thank you.

Charlottesville is positioned to be a national leader. This is the time to Do The Right Thing.

I own a home and plan to retire in Charlottesville soon. I have family there. I want to live in a just and equitably safe town.

a 43 year resident of Charlottesville, now in Durham, NC

We need police force education and training but “military-style” is not only not necessary but is counterproductive.

Please and thank you

We can be a role model since we are famous.

I have friends and family in C’ville, and hope that this city can help lead the way in de-escalation and demilitarization.

NOW is the time.

Former resident of Charlottesville. I have shared the link to this petition widely. Militarization of the police is one of the stupidest ugliest things to come out of the illegal invasion of Iraq.

This is the least we can do to bring real justice to our community and make everyone safe.

This is a decent first step.