Other Countries Have Proven They Want A World Without Nuclear Arms. Why Hasn’t Canada? 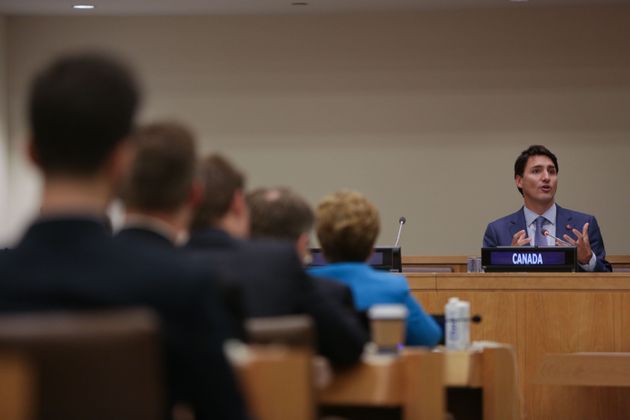 Perhaps more than any other international issue, the Canadian government’s response to the move to abolish nuclear weapons highlights the gap between what the Liberals say and do on the world stage.

Honduras recently became the 50th country to ratify the Treaty on the Prohibition of Nuclear Weapons (TPNW). As such, the accord will soon become law for the nations that have ratified it on January 22.

This important step towards stigmatizing and criminalizing these ghastly weapons couldn’t have come at a more necessary time.

Under U.S. President Donald Trump’s leadership, the U.S. further undercut nuclear non-proliferation, pulling out of the Intermediate-range Nuclear Forces (INF) treaty, Iran nuclear deal and Open Skies Treaty. Over 25 years the U.S. is spending $1.7 trillion to modernize its nuclear stockpile with new bombs that are 80 times more powerful than those dropped on Hiroshima and Nagasaki.

The UN Institute for Disarmament Research argues that the risk of nuclear weapons use is at its highest since the Second World War. This is reflected by the Bulletin of the Atomic Scientists, which has its Doomsday Clock at 100 seconds to midnight, representing the most perilous moment humanity has faced in decades.

What has been Prime Minister Justin Trudeau’s response? Canada was among the 38 countries that voted against holding the 2017 UN Conference to Negotiate a Legally Binding Instrument to Prohibit Nuclear Weapons, Leading Towards their Total Elimination (123 voted in favour). Trudeau also refused to send a representative to the forum attended by two-thirds of all countries that negotiated the TPNW. The prime minister went so far as to call the anti-nuclear initiative “useless,” and since then his government has refused to join the 84 countries that have already signed the treaty. At the UN General Assembly on Tuesday Canada voted against the 118 countries that reaffirmed support for the TPNW.

Incredibly, the Liberals have taken these positions all the while claiming to support a “world free of nuclear weapons.” “Canada unequivocally supports global nuclear disarmament,” Global Affairs claimed a week ago.

The Liberals have also prioritized championing an “international rules-based order” as a centrepiece of their foreign policy. Yet, the TPNW makes weapons that have always been immoral also illegal under international law.

The Liberals also claim to promote a “feminist foreign policy.” The TPNW, however, as noted by Ray Acheson, is the “first feminist law on nuclear weapons, recognizing the disproportionate impacts of nuclear weapons on women and girls.”

The government’s hostility to the Nuclear Ban Treaty may be catching up with them. The “No to Canada on United Nations Security Council” campaign, which may have contributed to the defeat in June, criticized their nuclear policy. (Canada’s main competitor for seat on the Security Council, Ireland, has ratified the TPNW.) “In a disappointing move, Canada refused to join 122 countries represented at the 2017 UN Conference to Negotiate a Legally Binding Instrument to Prohibit Nuclear Weapons, Leading Towards their Total Elimination,” noted a letter delivered to all UN ambassadors on behalf of 4,000 individuals, including many prominent international figures.

Since the 75th anniversary of the atomic bombing of Hiroshima and Nagasaki three months ago, there has been a burst of anti-nuclear activism. The terrible anniversary placed a spotlight on the issue, and thousands of Canadians signed petitions calling on the government to join the TPNW. Amidst the commemoration the NDP, Greens and Bloc Québécois all called for Canada to adopt the UN Nuclear Ban Treaty.

As more countries ratify the Treaty on the Prohibition of Nuclear Weapons, the pressure on the Trudeau government to follow suit will grow. It will become more and more difficult to sustain the gap between what they say and do internationally.