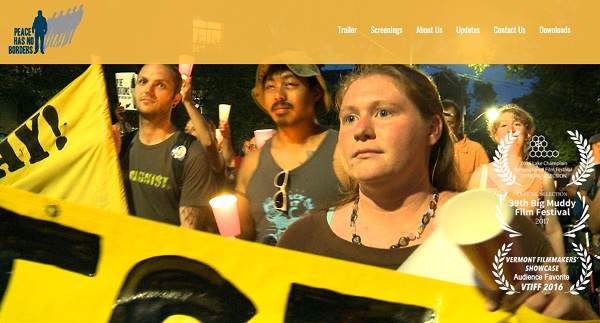 Deb Ellis’ and Dennis Mueller’s film Peace Has No Borders tells the story of U.S. war resisters in Canada in opposition to the 2003-present war on Iraq, and the efforts of the War Resisters Support Campaign to win them the right not to be deported.

Many members of the U.S. military in recent years have deserted and moved to Canada, where they have in some cases spoken out against the U.S. war on Iraq. This film shows us a bit of some of their stories.

Jeremy Hinzman was the first.

Kimberly Rivera was a U.S. Army truck driver in Iraq who lost her belief in the lies about the war.

Patrick Hart was also in the Army. He says another soldier told him he’d pulled the hair of many Iraqi children out of the grill of his vehicle, and that one needed to simply treat kids as speed bumps. Hart wasn’t down with that.

Chuck Wiley was in the U.S. Navy for 16 years and finally objected to bombing civilian buildings, which he says — wearing his Veterans For Peace shirt — left him the choice of going to prison or leaving the United States.

The War Resisters Support Committee was founded in 2004 and grew rapidly in 2005. Resisters sought refugee status on the grounds of refusing to participate in an “illegal war.” They were denied.

Polling found that two-thirds of Canadians wanted to allow resisters to stay. The Canadian government was much more reluctant, representing — as it does — the United States government, more so than Canadian people.

Olivia Chow, MP, said that she believed anyone resisting the war on Iraq was courageous, and that Canada needed more courageous people. Chow proposed a non-binding motion, which passed through Parliament. Every member of Parliament had to choose, said Chow, to say yes to the war or yes to the courageous war resisters.

Wiley spoke of his growing love for Canada based on his experiencing how a government can actually represent people. Sadly, however, non-binding resolutions had no impact on the government of Prime Minister Stephen Harper.

So, a binding bill was introduced. Strategically, a member of the Liberal Party took the lead, to ensure Liberal votes. But when it came time to actually vote, that party’s war-author leader Michael Ignatieff led a dozen of his party members in going AWOL from Parliament to avoid voting and ensure defeat — a supreme act of cowardice in response to the demands of courage.

Rivera and Hart were deported. Rivera spent 10 months in prison. Hart received a record 25-month sentence. Wiley discovered that he had been discharged. All of them now live in the United States. Hinzman won, at least temporarily, the right to stay in Canada.

In 2015 the Conservative Party lost. But the new government under Prime Minister Justin Trudeau has not acted on behalf of the remaining resisters, has not made the non-binding motions meaningful. And no new bills have been introduced.

This sets a bad precedent for all the current U.S. wars and all the U.S. wars yet to come. It seems critical that Canada, now, while it has a government that puts up some pretense of decency, act decisively to establish standards for sheltering conscientious objectors to wars — standards that will hold up during any hell yet to be brought forth from the bowels of Washington, D.C.