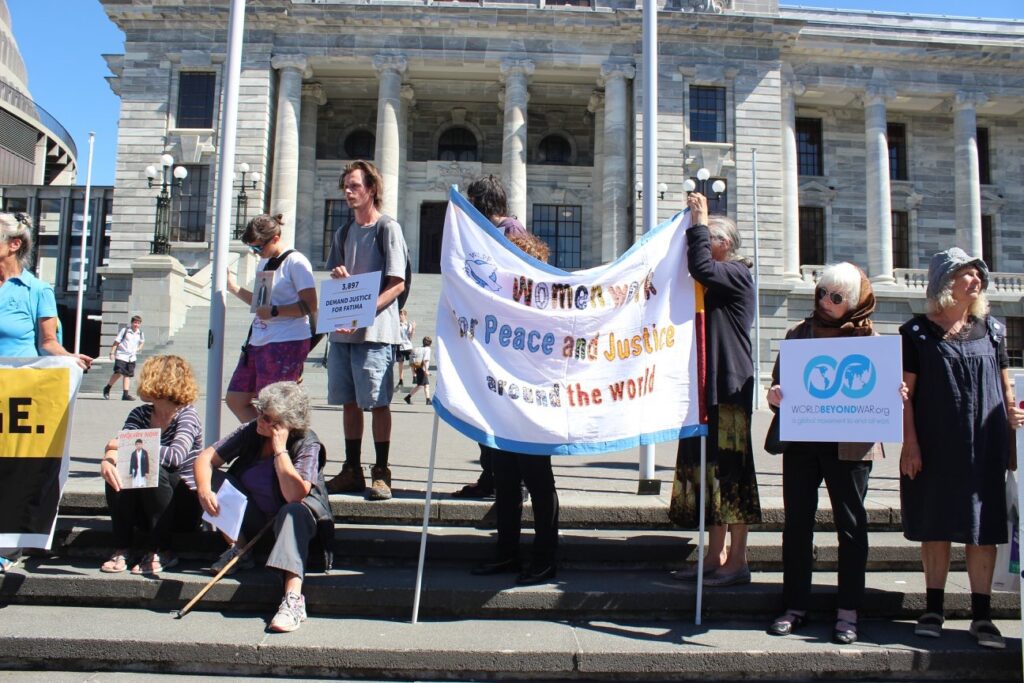 A delegation of human rights and disarmament groups, including World BEYOND War, went to the New Zealand Parliament in Wellington on 13 March 2018 to deliver a petition calling for an inquiry into a claim by journalists that Afghan civilians were killed by soldiers.

They say there is evidence that the New Zealand SAS was responsible for a raid on an Afghan village in 2010 in which six civilians were killed, including a 3 year old girl, and another fifteen wounded. The claim was made in the 2017 book, ‘Hit and Run’, by investigative journalists Nicky Hager and Jon Stephenson which provided compelling evidence that this was the case, but was denied at the time by the military, though information continues to be released that this
was in fact the case.

The civil rights organisations, including Hit & Run Inquiry Campaign, ActionStation, Peace Action Wellington, World BEYOND War, and Women’s International League for Peace and Freedom Aotearoa, endorsed the petition and also sent a briefing to the Attorney General, while Amnesty International and Women’s March Aotearoa NZ stood in solidarity with these groups.

The petition handover was in the form of a little coffin commemorating the young life of the three-year-old Fatima who was killed as a result of Operation Burnham on 22 August 2010.

Spokesperson Dr Carl Bradley said the groups welcome the government’s moves towards an inquiry but that it was essential that the inquiry is broad, rigorous and independent.

“The inquiry should look specifically at allegations regarding ‘Operation Burnham’ on 22 August 2010 in Afghanistan’s Baghlan Province in which it is alleged several civilians were killed, and the January 2011 detention of Qari Miraj and his alleged beating and transfer to the National Directorate of Security, who are known to practice torture. Given the severity of the allegations and the United Nation’s attention to them, we believe a Public Inquiry is most appropriate.”

“New Zealand’s reputation as a good international citizen is not to be treated lightly – it must be earned repeatedly. The allegations against our Defence Force reflect poorly on New Zealand and its people. If New Zealand soldiers killed and hurt innocent civilians, we need to stand-up and hold ourselves to account and learn the lessons so that such events are never again repeated” says Dr Bradley.

Meanwhile World BEYOND War New Zealand is planning a forum to look further into our involvement in Afghanistan. Coordinator Liz Remmerswaal is interested to hear from other countries who have similar concerns about human rights abuses in Afghanistan and can be contacted at lizrem@gmail.com