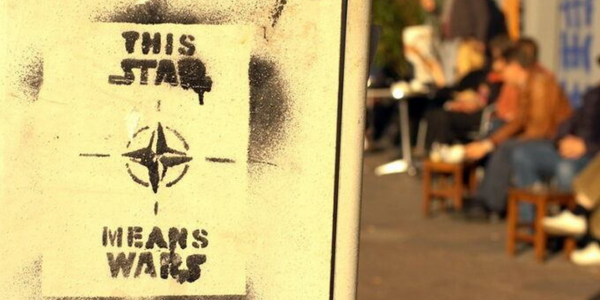 It is difficult to understand why Western politicians and the mainstream media fail to perceive the existential danger they have imposed on Russia and recklessly on the rest of us. NATO’s insistence on its so-called “open door” policy is solipsistic and blithely ignores Russia’s legitimate security interests. No country would put up with that kind of expansion. Certainly not the US if by comparison Mexico would be tempted to join a Chinese-led alliance.

NATO has displayed what I would call culpable intransigence and its refusal to negotiate a Europe-wide or even worldwide security agreement constituted a form of provocation, directly triggering the current war in Ukraine. Moreover, it is easy to grasp that this war could very easily escalate to mutual nuclear annihilation.

This is not the first time that humanity finds itself confronted by a grave crisis that could have been prevented by keeping the promises given to the late Mikhail Gorbachev by the former US Secretary of State James Baker[1] and by other US officials. NATO’s eastern expansion since 1997 has been perceived by Russian leaders as a serious breach of a crucial security agreement with existential overtones. It has been perceived as an ever increasing menace, a “threat of the use of force” for purposes of article 2(4) of the UN Charter. This entails a grave risk of nuclear confrontation, since Russia has a huge nuclear arsenal and the means to deliver the warheads.

The important question that is not being posed by the mainstream media is: Why are we provoking a nuclear power? Have we lost our sense for proportions? Are we playing a kind of “Russian roulette” with the fate of future generations of humans on the planet?

This is not only a political question, but very much a social, philosophical and moral matter. Our leaders surely do not have the right to endanger the lives of all Americans. This a highly undemocratic behaviour and should be condemned by the American people. Alas, the mainstream media has been disseminating anti-Russian propaganda for decades. Why is NATO playing this highly risky “va banque” game? Can we also endanger the lives of all Europeans, Asians, Africans and Latin Americans? Just because we are “exceptionalists” and want to be intransigent about our “right” to expand NATO?

Let us take a deep breath and recall how close the world was to Apocalypse at the time of the Cuban missile crisis in October 1962. Thank God there were people with cool heads at the White House and John F. Kennedy did opt for direct negotiation with the Soviets, because the fate of humankind lay in his hands. I was a high school student in Chicago and remember watching the debates between Adlai Stevenson III and Valentin Zorin (whom I met many years later when I was a senior UN human rights officer in Geneva).

In 1962 the UN saved the world by providing the forum where differences could be settled peacefully. It is a tragedy that the current Secretary General Antonio Guterres failed to address the danger posed by NATO expansion in a timely fashion. He could have but failed to facilitate negotiation between Russia and NATO countries before February 2022. It is a disgrace that OSCE failed to persuade the Ukrainian government that it had to implement the Minsk Agreements – pacta sunt servanda.

It is deplorable that neutral countries like Switzerland failed to speak up for humanity when it was still possible to stop the outbreak of the war. Even now, it is imperative to stop the war. Anyone who is prolonging the war is committing a crime against peace and a crime against humanity. The killing must stop today and all of humanity should stand up and demand Peace NOW.

I remember John F. Kennedy’s commencement address at American University in Washington DC on 10 June 1963[2]. I think that all politicians should read this remarkably wise statement and see how relevant it is to solving the current war in Ukraine. Professor Jeffrey Sachs of Columbia University in New York wrote an insightful book about it.[3]

Kennedy chose to discuss “the most important topic on earth: world peace. What kind of peace do I mean? What kind of peace do we seek? Not a Pax Americana enforced on the world by American weapons of war. Not the peace of the grave or the security of the slave. I am talking about genuine peace, the kind of peace that makes life on earth worth living, the kind that enables men and nations to grow and to hope and to build a better life for their children–not merely peace for Americans but peace for all men and women–not merely peace in our time but peace for all time.”

Kennedy had good advisors who reminded him that “total war makes no sense …in an age when a single nuclear weapon contains almost ten times the explosive force delivered by all the allied air forces in the Second World War. It makes no sense in an age when the deadly poisons produced by a nuclear exchange would be carried by wind and water and soil and seed to the far corners of the globe and to generations yet unborn.”

Kennedy and his predecessor Eisenhower repeatedly condemned the expenditure of billions of dollars every year on weapons, because such expenditures are not an efficient way of assuring peace, which is the necessary rational end of rational men.

Unlike Kennedy’s successors in the White House, JFK did have a sense of reality and a capacity of self-criticism: “Some say that it is useless to speak of world peace or world law or world disarmament–and that it will be useless until the leaders of the Soviet Union adopt a more enlightened attitude. I hope they do. I believe we can help them do it. But I also believe that we must re-examine our own attitude–as individuals and as a Nation–for our attitude is as essential as theirs.”

Accordingly, he proposed examining the US attitude toward peace itself. “Too many of us think it is impossible. Too many think it unreal. But that is a dangerous, defeatist belief. It leads to the conclusion that war is inevitable–that mankind is doomed–that we are gripped by forces we cannot control.” He refused to accept that view. As he told the graduates at American University, “Our problems are manmade–therefore, they can be solved by man. And man can be as big as he wants. No problem of human destiny is beyond human beings. Man’s reason and spirit have often solved the seemingly unsolvable–and we believe they can do it again….”

He encouraged his audience to focus on a more practical, more attainable peace, based not on a sudden revolution in human nature but on a gradual evolution in human institutions–on a series of concrete actions and effective agreements which are in the interest of all concerned: “There is no single, simple key to this peace–no grand or magic formula to be adopted by one or two powers. Genuine peace must be the product of many nations, the sum of many acts. It must be dynamic, not static, changing to meet the challenge of each new generation. For peace is a process–a way of solving problems.”

Personally, I am saddened by the fact that Kennedy’s words are so far removed from the rhetoric we hear today from both Biden and Blinken, whose narrative is one of self-righteous condemnation – a black and white caricature – no hint of JFK’s humanistic and pragmatic approach to international relations.

I am encouraged to rediscover JFK’s vision: “World peace, like community peace, does not require that each man love his neighbour–it requires only that they live together in mutual tolerance, submitting their disputes to a just and peaceful settlement. And history teaches us that enmities between nations, as between individuals, do not last forever.”

JFK insisted that we must persevere and take a less categorical view of our own goodness and the evil of our adversaries. He reminded his audience that peace need not be impracticable, and war need not be inevitable. “By defining our goal more clearly, by making it seem more manageable and less remote, we can help all peoples to see it, to draw hope from it, and to move irresistibly toward it.”

His conclusion was a tour de force: “We must, therefore, persevere in the search for peace in the hope that constructive changes within the Communist bloc might bring within reach solutions which now seem beyond us. We must conduct our affairs in such a way that it becomes in the Communists’ interest to agree on a genuine peace. Above all, while defending our own vital interests, nuclear powers must avert those confrontations which bring an adversary to a choice of either a humiliating retreat or a nuclear war. To adopt that kind of course in the nuclear age would be evidence only of the bankruptcy of our policy–or of a collective death-wish for the world.”

The graduates at American University enthusiastically applauded Kennedy in 1963. I would wish that every university student, every high school student, every member of Congress, every journalist would read this speech and ponder on its implications for the world TODAY. I wish that they would read George F. Kennan’s New York Times[4] essay of 1997 condemning NATO expansion, the perspective of Jack Matlock[5], the last US ambassador to the USSR, the warnings of US scholars Stephen Cohen[6] and Professor John Mearsheimer[7].

I fear that in the current world of fake news and manipulated narratives, in today’s brainwashed society, Kennedy would be accused of being an “appeaser”of Russia, even a traitor to American values. And yet, the fate of all of humanity is now at stake. And what we really need is another JFK in the White House.

Alfred de Zayas is a law professor at the Geneva School of Diplomacy and served as a UN Independent Expert on International Order 2012-18. He is the author of eleven books including “Building a Just World Order” Clarity Press, 2021, and “Countering Mainstream Narratives”, Clarity Press, 2022.

Alfred de Zayas is a law professor at the Geneva School of Diplomacy and served as a UN Independent Expert on International Order 2012-18. He is the author of ten books including “Building a Just World Order” Clarity Press, 2021.