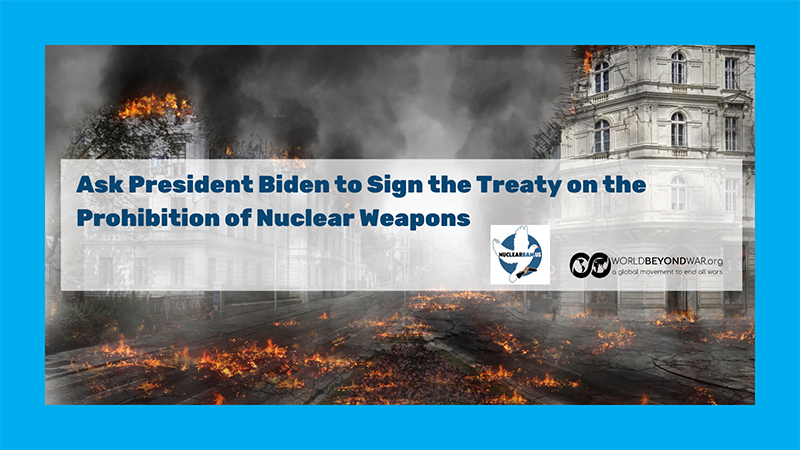 We, the undersigned, call on you to immediately sign, on behalf of the United States, the Treaty on the Prohibition of Nuclear Weapons (TPNW), also known as the “Nuclear Ban Treaty.”

Mr. President, January 22, 2023 marks the second anniversary of entry into force of the TPNW. Here are six compelling reasons why you should sign this treaty now:

According to the Bulletin of Atomic Scientists, the world stands closer to “doomsday” than at any point even during the darkest days of the Cold War. And the use of even one nuclear weapon would constitute a humanitarian disaster of unparalleled proportions. A full-scale nuclear war would spell the end of human civilization as we know it. There is nothing, Mr. President, that could possibly justify that level of risk.

Mr. President, the real risk we are facing is not so much that President Putin or some other leader will purposely use nuclear weapons, although that is clearly possible. The real risk with these weapons is that human error, computer malfunction, cyber attack, miscalculation, misunderstanding, miscommunication, or a simple accident could so easily lead inexorably to a nuclear conflagration without anyone ever intending it to.

The increased tension that now exists between the US and Russia makes an unintended launch of nuclear weapons so much more likely, and the risks are simply too great to be ignored or downplayed. It is imperative that you take action to reduce those risks. And the only way to reduce that risk to zero is to eliminate the weapons themselves. That is what the TPNW stands for. That is what the rest of the world demands. That is what humanity requires.

Russia’s invasion of Ukraine and the US response to it may have greatly improved America’s standing, at least in Western Europe. But the imminent deployment of a new generation of US “tactical” nuclear weapons to Europe could quickly change all that. The last time such a plan was attempted, in the 1980s, it led to enormous levels of hostility toward the US and nearly toppled several NATO governments.

This treaty has enormous public support across the world and especially in Western Europe. As more and more countries sign on to it, its power and significance will only grow. And the longer the United States stands in opposition to this treaty, the worse our standing will be in the eyes of the world, including some of our closest allies.

As of today, 68 countries have ratified this treaty, outlawing everything to do with nuclear weapons in those countries. Another 27 countries are in the process of ratifying the treaty and many more are lining up to do so.

Germany, Norway, Finland, Sweden, Netherlands, Belgium (and Australia) were among the countries who officially attended as observers the first meeting of TPNW last year in Vienna. They, together with other close allies of the United States, including Italy, Spain, Iceland, Denmark, Japan and Canada, have voting populations who overwhelming support their countries signing the treaty, according to recent opinion polls. There are also hundreds of legislators in those countries who have signed the International Campaign to Abolish Nuclear Weapons (ICAN) pledge in support of the TPNW, including the prime ministers of both Iceland and Australia.

It is not a question of “if,” but only of “when,” these and many other countries will join the TPNW and outlaw everything to do with nuclear weapons. As they do, US armed forces and the international corporations involved in the development and production of nuclear weapons will face increasing difficulties in carrying on with business as usual. It is already punishable with an unlimited fine and up to life in prison if found guilty of involvement with the development, production, maintenance, transportation or handling of (anyone’s) nuclear weapons in Ireland.

As it states very clearly in the US Law of War Manual, US military forces are bound by international treaties even when the US does not sign them, when such treaties represent “modern international public opinion” as to how military operations should be conducted. And already investors representing more than $4.6 trillion in global assets have divested from nuclear weapons companies because of the global norms that are shifting as a result of the TPNW.

As you know very well, signing a treaty is not the same as ratifying it, and only once it is ratified do the terms of the treaty enter into force. Signing is just the first step. And signing the TPNW does not commit this country to a goal it is not publicly and legally committed to already; namely, the total elimination of nuclear weapons.

President Obama famously earned a Nobel Peace Prize for committing the United States to the goal of a nuclear-free world, and you yourself have reiterated that commitment on a number of occasions, most recently on August 1, 2022, when you pledged from the White House “to continue working toward the ultimate goal of a world without nuclear weapons.”

Mr. President, signing the TPNW would demonstrate the sincerity of your commitment to actually achieve that goal. Getting all the other nuclear-armed nations to also sign the treaty would be the next step, ultimately leading to ratification of the treaty and the elimination of all nuclear weapons from all countries. In the meantime, the United States would be no more at risk of nuclear attack or nuclear blackmail than it is at present, and until ratification, would still maintain the same nuclear arsenal of nuclear weapons as it does today.

In fact, under the terms of the treaty, the complete, verifiable and irreversible elimination of nuclear weapons only takes place well after ratification of the treaty, in accordance with a legally-binding timebound plan that all parties have agreed to. This would allow for staged reductions according to a mutually agreed timetable, as with other disarmament treaties.

It is no surprise that Kim Jong-un thinks nuclear weapons will deter an attack on his country by the United States, and yet I’m sure you agree that his possession of nuclear weapons makes such an attack more likely at some point in the future, not less likely.

President Putin threatened to use nuclear weapons against any country that tried to interfere with his invasion of Ukraine. That was not the first time anyone has threatened to use nuclear weapons, of course. Your predecessor in the White House threatened North Korea with nuclear annihilation in 2017. And nuclear threats have been made by previous US Presidents and the leaders of other nuclear-armed nations going all the way back to the aftermath of World War II.

But these threats are meaningless unless they are carried out, and they are never carried out for the very simple reason that to do so would be an act of suicide and no sane political leader is likely to ever make that choice.

In your joint statement with Russia, China, France and the UK in January of last year, you clearly stated that “a nuclear war cannot be won and must never be fought.” The G20 statement from Bali reiterated that “the use or threat of use of nuclear weapons is inadmissible. The peaceful resolution of conflicts, efforts to address crises, as well as diplomacy and dialogue, are vital. Today’s era must not be of war.”

What do such statements mean, Mr. President, if not the utter pointlessness of retaining and upgrading expensive nuclear weapons that can never be used?

Mr. President, despite the fact that nuclear weapons do not deter aggression and do not help win wars, other countries continue to want them. Kim Jong-un wants nuclear weapons to defend himself from the United States precisely because we continue to insist that these weapons somehow defend us from him. It is no surprise that Iran might feel the same way.

The longer we go on insisting that we must have nuclear weapons for our own defense, and that these are the “supreme” guarantee of our security, the more we are encouraging other countries to want the same. South Korea and Saudi Arabia are already considering acquiring their own nuclear weapons. Soon there will be others.

How can a world awash in nuclear weapons possibly be safer than a world without any nuclear weapons? Mr. President, this is the moment to seize the opportunity to eliminate these weapons once and for all, before more and more countries are engulfed in an uncontrollable arms race that can have only one possible outcome. Eliminating these weapons now is not just a moral imperative, it is a national security imperative.

Without a single nuclear weapon, the United States would still be the most powerful country in the world by a very wide margin. Together with our military allies, our military spending outpaces all our potential adversaries put together many times over, every single year. No country on earth comes close to being able to seriously threaten the United States and its allies – unless they have nuclear weapons.

Nuclear weapons are the global equalizer. They enable a comparatively small, poor country, with its people virtually starving, to nevertheless threaten the mightiest world power in all of human history. And the only way to finally eliminate that threat is to eliminate all nuclear weapons. That, Mr. President, is a national security imperative.

You have taken important steps to address the climate crisis, through your infrastructure bill and the inflation reduction act. You have been hampered by Supreme Court decisions and a difficult Congress from achieving more of what you know is needed to fully address this crisis. And yet, trillions of taxpayer dollars are being poured into developing the next generation of nuclear weapons, along with all the other military hardware and infrastructure you have signed off on.

Mr. President, for the sake of our children and grandchildren, please use this opportunity to switch gears and begin the transition to a sustainable world for them. You don’t need Congress or the Supreme Court to sign a treaty on behalf of the United States. That is your prerogative as President.

And by signing the TPNW, we can begin the monumental shift of resources that is needed from nuclear weapons to climate solutions. By signalling the beginning of the end of nuclear weapons, you would be enabling and encouraging the vast scientific and industrial infrastructure that supports the nuclear weapons industry to begin to make that transition, along with the billions in private finance that support that industry.

And most importantly, you would be opening up a door to improved international cooperation with Russia, China, India and the EU without which no action on climate will be sufficient to save the planet. Please, Mr. President, you can do this!

CLICK HERE TO SEND THIS TO PRESIDENT BIDEN.
(White House only accepts Emails from U.S. residents.)