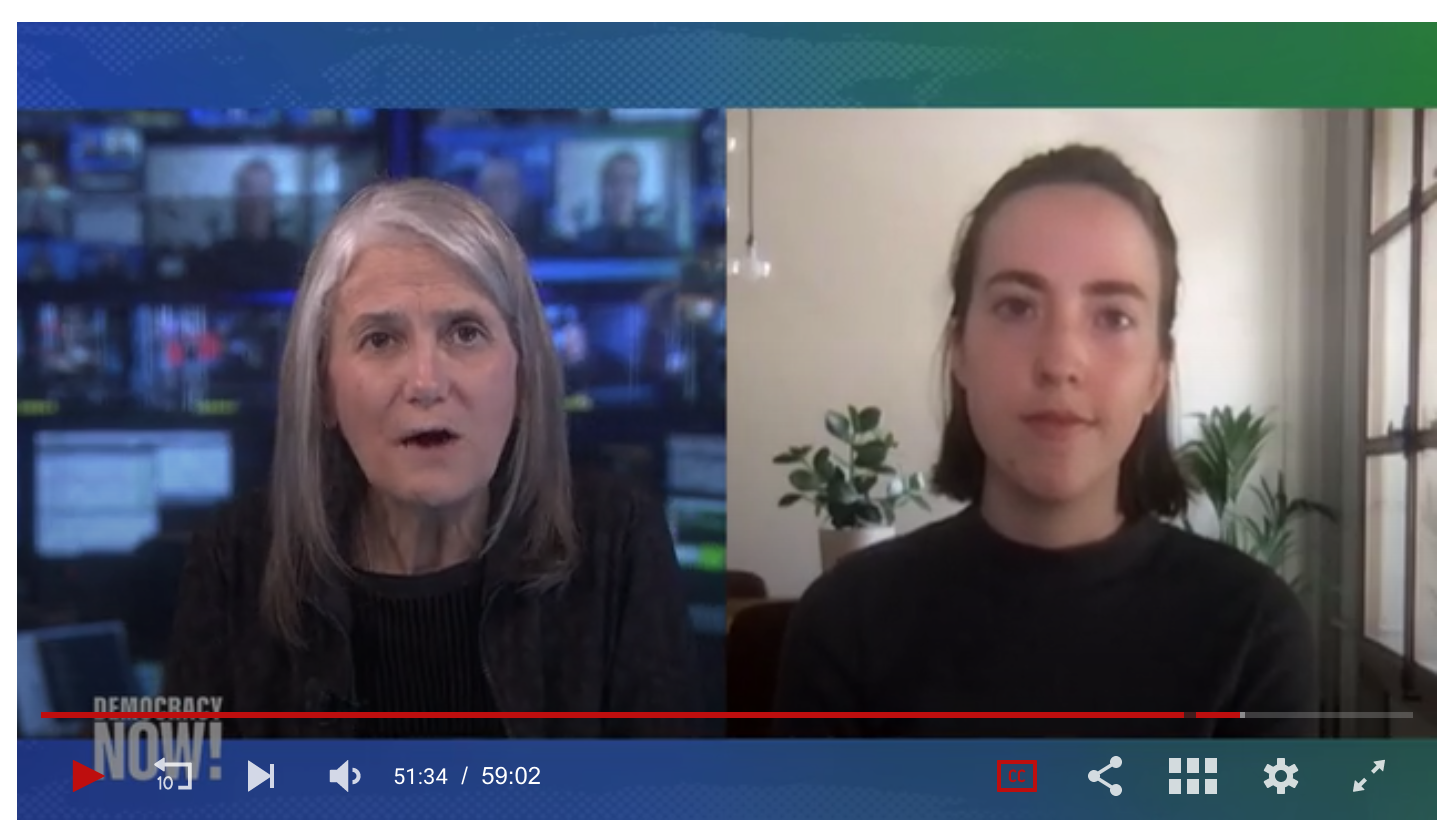 The United States and the United Kingdom are facing international criticism for moving to expand their nuclear arsenals, defying a growing global movement in support of nuclear disarmament. The U.S. is planning to spend $100 billion to develop a new nuclear missile which could travel 6,000 miles carrying a warhead 20 times stronger than the one dropped on Hiroshima, while British Prime Minister Boris Johnson has just announced plans to lift the cap on its nuclear stockpile, ending three decades of gradual nuclear disarmament in the U.K. “We’re seeing this united, uniform response of nuclear-armed states to what the rest of the world is calling for, which is the total elimination of nuclear weapons,” says Alicia Sanders-Zakre, a policy and research coordinator at the International Campaign to Abolish Nuclear Weapons.

This is a rush transcript. Copy may not be in its final form.

The United States and the United Kingdom are facing international criticism for moving to expand their nuclear arsenals, defying a growing global movement in support of nuclear disarmament. The United States is planning to spend $100 billion — billion — to develop a new nuclear missile which could travel 6,000 miles carrying a warhead 20 times stronger than the one dropped on Hiroshima. The cost of building and maintaining the Ground-Based Strategic Deterrent, or GBSD, as it’s known, could swell to $264 billion over the coming decades, with much of the money going to military contractors, including Northrop Grumman, Lockheed Martin and General Dynamics.

Meanwhile, British Prime Minister Boris Johnson has just announced plans to lift the cap on its nuclear stockpile, increasing the number of Trident nuclear warheads by over 40%. The move ends three decades of gradual nuclear disarmament in the U.K.

On Wednesday, a spokesperson for the U.N. secretary-general criticized Johnson’s decision, which would violate the Treaty on the Non-Proliferation of Nuclear Weapons, or NPT.

STÉPHANE DUJARRIC: But we do express our concern at the U.K.’s decision to increase its nuclear weapons arsenal, which is contrary to its obligations under Article VI of the NPT and could have a damaging impact on global stability and efforts to pursue a world free of nuclear weapons. At a time when nuclear weapon risks are higher than they have been since the Cold War, investments in disarmament and arms control is the best way to strengthen the stability and reduce nuclear danger.

AMY GOODMAN: These developments come less than two months after the landmark U.N. Treaty on the Prohibition of Nuclear Weapons entered into force. The agreement has been ratified by more than 50 countries, but those do not include any of the world’s nine nuclear powers: Britain, China, France, India, Israel, North Korea, Pakistan, Russia and the United States.

We’re joined now by Alicia Sanders-Zakre, policy and research coordinator at the International Campaign to Abolish Nuclear Weapons. The group won the Nobel Peace Prize in 2017.

Thank you so much for joining us from Geneva, Switzerland. Can you talk first about the U.K. lifting the cap on development of more nuclear weapons, and then the United States developing this massive, quarter-of-a-trillion-dollar nuclear weapon?

ALICIA SANDERS–ZAKRE: Absolutely. And thank you so much for having me here today and for paying attention to these really important, really concerning developments in both the United States and the United Kingdom. I think it is really important to link these two stories, because we’re seeing this united, uniform response of nuclear-armed states to what the rest of the world is calling for, which is the total elimination of nuclear weapons.

In the United Kingdom, there was this recent irresponsible, anti-democratic move to increase the cap of nuclear warheads, which also, as was mentioned in the introduction, is a violation of international law. This is entirely unacceptable. It has been rightly criticized, both at home and abroad. And it’s a move that really flies in the face of what the rest of the world is calling for and what the Treaty on the Prohibition of Nuclear Weapons represents.

NERMEEN SHAIKH: And, Alicia, could you say a little more about this document that Prime Minister Johnson has pushed forward? As you said, it’s anti-democratic. It’s met with widespread condemnation, not only across the world, but also in Britain. First of all, is this irreversible, the 40% increase in the number of Trident nuclear warheads that the document lays out? And also, what does it have to do with Brexit? This is apparently part of the Johnson administration’s plan for a post-Brexit future and the role of Britain globally?

ALICIA SANDERS–ZAKRE: I think it’s really important to stress that it’s not irreversible. This decision came out of what’s called the Integrated Review, a review of defense and foreign policy, that originally was supposed to be very futuristic, forward-looking, new policy, post-Cold War. Of course, what we actually see in the documents, when it comes to nuclear weapons, is really a return to dangerous Cold War thinking, in terms of increasing a previously stated commitment, a previous cap of nuclear warheads. In past reviews, the United Kingdom had promised, publicly promised, to reduce its nuclear cap to 180 warheads by the mid-2020s, in just a couple years. And now, without giving any real justification, other than a change in the strategic environment, the United Kingdom has chosen to increase that cap.

So I think it’s very clear that it’s a political decision. It could very well be linked to the Johnson administration’s political agenda, you know, I think, in many ways linked to the previous Trump administration agenda on nuclear weapons, which was to consider developing new types of nuclear weapons, to completely disregard international law and international opinion on nuclear weapons. But important to remember, yes, this is the product of a review, but, certainly, I think, with public pressure, both domestically and internationally, the U.K. can, and absolutely must, reverse this decision and instead take steps to join the Treaty on the Prohibition of Nuclear Weapons.

AMY GOODMAN: Iran has accused the British Prime Minister Boris Johnson of “utter hypocrisy” for announcing the decision to expand its nuclear arsenal on the same day Johnson expressed concern about Iran’s nuclear program. The Iranian foreign minister, Javad Zarif, said, quote, “Unlike the UK and allies, Iran believes nukes and all WMDs are barbaric and must be eradicated.” Your response, Alicia?

ALICIA SANDERS–ZAKRE: I think it has been a consistent problem in international discourse on nuclear weapons to really differentiate how we talk about certain nuclear-armed countries. And the U.K. and the United States have really championed this. They really consider themselves legitimate, responsible nuclear powers, in opposition to other more recent nuclear-armed states, such as Iran — sorry, not Iran — North Korea.

And I think that this is really — clearly, this move is showing that that’s a false narrative. All countries with nuclear weapons have, you know, a real — have the destructive, unacceptable power to inflict really unprecedented humanitarian consequences for the world. And any nuclear-armed state should be condemned for engaging in this behavior that has been outlawed by international treaties, most recently by the Treaty on the Prohibition of Nuclear Weapons. So, no matter who the country is, developing, producing, maintaining their stockpiles is immoral and illegal.

AMY GOODMAN: Alicia Sanders-Zakre, we want to thank you so much for being with us, policy and research coordinator at the International Campaign to Abolish Nuclear Weapons, ICAN, which won the Nobel Peace Prize a few years ago.

Tomorrow, we’ll be speaking with Heather McGhee about The Sum of Us.

To sign up for our Daily Digest, go to democracynow.org.