Historic Golden Rule Peace Boat On Its Way to Cuba: Veterans For Peace Calls for an End to U.S. Blockade 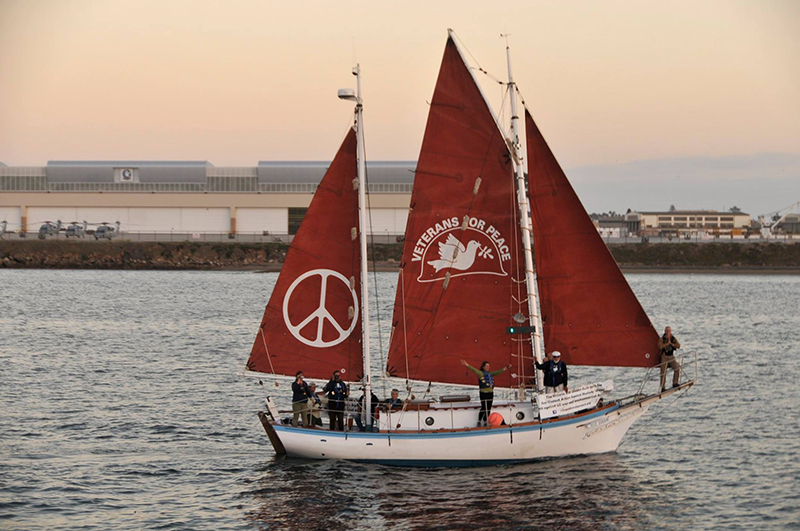 The historic Golden Rule anti-nuclear sailboat is on its way to Cuba. The storied wooden boat, which was sailed toward the Marshall Islands in 1958 to interfere with US nuclear testing, set sail from Key West, Florida on Friday morning, and will arrive at the Hemingway Marina in Havana on Saturday morning, New Years Eve day. The 34-foot ketch belongs to Veterans For Peace, and implements its mission “to end the arms race and to reduce and eventually eliminate nuclear weapons.”

The five crew members will be joined by Veterans For Peace members who are flying to Havana to participate in an educational Arts & Culture program coordinated by the Proximity Cuba tour agency. The veterans will also be visiting communities that suffered great damage from the recent Hurricane Ian, which destroyed thousands of homes in Pinar del Rio province in western Cuba. They are carrying humanitarian aid for people who lost their homes.

“We are on an educational and humanitarian mission,” says Golden Rule Project Manager Helen Jaccard. “We are three-and-a-half months into a 15-month, 11,000 mile voyage around the ‘Great Loop’ of the midwestern, southern, and northeastern United States. When we saw we would be in Key West, Florida at the end of December, we said, ‘Look, Cuba is only 90 miles away! And the world almost had a nuclear war over Cuba.’”

60 years ago, in October 1962, the world came perilously close to a civilization-ending nuclear war during a superpower showdown between the US and the Soviet Union, which had placed nuclear missiles near each others borders, in Turkey and Cuba, respectively. The CIA had also organized an armed invasion of Cuba in a disastrous attempt to overthrow the government of Fidel Castro.

“Sixty years later, the US still maintains a brutal economic blockade of Cuba, strangling Cuba’s economic development and causing suffering for Cuban families,” said Gerry Condon, former president of Veterans For Peace, and part of the crew that is sailing to Cuba. “The whole world opposes the US blockade of Cuba and it is time for it to end.” This year only the US and Israel voted No on a UN resolution calling on the US government to end its blockade of Cuba.

“Now the US/Russia standoff over Ukraine has once again raised the specter of nuclear war,” said Gerry Condon. “It was urgent diplomacy between US President John Kennedy and Russian leader Nikita Khruschev that resolved the Cuban Missile Crisis and spared the world a nuclear war,” continued Condon. “That is the kind of diplomacy that we need today.”

Veterans For Peace is calling for an end to the U.S. blockade of Cuba, for a Ceasefire and Negotiations to End the War in Ukraine, and for the Total Abolition of Nuclear Weapons.