Guantanamo Must Be Dismantled and Not Forgotten 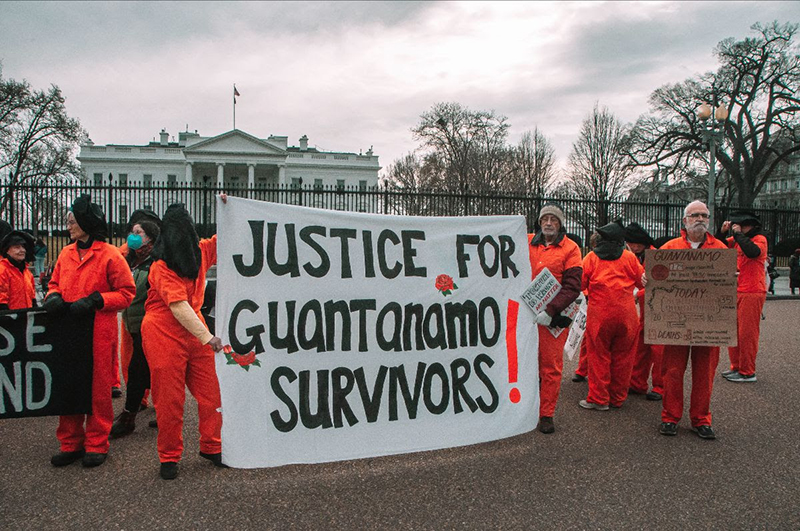 Thirty men have died since they were cleared and released from Guantanamo prison. What did they die of? Where were they? Does anyone know? Did we here in the U.S. care? Weren’t they “the worst of the worst” who plotted 9/11?

I was just in Washington, DC as a member of Witness Against Torture to protest the 21st anniversary of the opening of Guantanamo, and I have some questions.

Do we need a War on Terror? Many of us thought so, to answer 9/11, to protect the United States. But, did it have to be a military war? Did it have to target Muslim men? Did it have to ignite a latent Islamophobia? So many questions. So few truthful answers. But we do have some facts.

Guantanamo Prison, outside of U.S. borders, on the island of Cuba, received its first prisoners on Jan. 11, 2002. Since then, 779 Muslim men and boys have been held there, almost all without being charged or tried for a crime, almost all released after years of detention so that there are only 35 left. So surely those 35 are guilty of something. But no. Twenty of them have also been cleared for release, since February 2021, yet are still locked up — waiting.

Cleared for release means some third country has to take them off our hands, because we, who have abused them for up to 20 years, refuse to take them, by congressional order. While the U.S. begs and bribes other countries to receive these men, the men sit in their cells and wait, thus prolonging the agony of not knowing if or when freedom will come.

Yet, freedom has not proved to be free. Aside from the aforementioned 30 who have died since they were released, hundreds more are caught in limbo, without a passport, without a job, without medical care or insurance, and without being reunited with their families! Some are in countries where they don’t speak the language; some are shunned as ex-Gitmo, as if they had committed a crime.

What do we owe to these men? — for they are men, humans like us, deserving of respect and care. (We tortured some of them, in the most despicable ways, but that truth too is hidden in the secret Senate “Torture Report”). If you think we owe them some token repair, you can help through the Guantanamo Survivors Fund. (www.nogitmos.org)

Full disclosure: Ten of the 35 men at Guantanamo today have been charged, but their confessions were obtained under torture and thus being questioned. Two men have been tried and convicted. Ironically, the so-called, self-proclaimed mastermind of the 9/11 attacks, Khalid Sheikh Mohammed, and his four co-conspirators, all at Guantanamo under military detention like the rest, have not been tried. Does this look like a functioning judicial system? Is this the way to spend our resources, at the cost of $14 million per prisoner per year?

Let us not forget Guantanamo, but instead work to dismantle it. It is part of a wrongful, violent, inhumane policy of our government. It is our responsibility. Let us create healthy systems that are inclusive and based on justice for all. Guantanamo is not that.

Sherrill Hogen, a member of Witness Against Torture, No More Guantanamos, and World BEYOND War, lives in Charlemont.