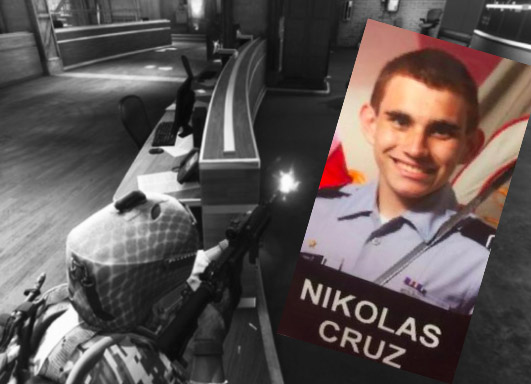 Cadet Private First-Class Nik Cruz was talking to America when he posted his photos on Instagram. Nik takes us inside his world. He wanted us to see his development from a fairly normal kid to a serial killer. Cruz is a product of American culture and he has a message for us, although we may not want to hear it. Cruz’s odyssey from ostracized youth to serial killer is noted for its adherence to a well-documented script. Cruz is the prototype. He is general issue.

A neighbor of Nikolas Cruz told the Miami Herald that the boy  played video games for as much as 15 hours a day. “It was kill, kill, kill, blow up something, and kill some more, all day,” he said.

Nik may have also played America’s Army 4,  a free online combat game developed by the Pentagon that has helped to recruit youth into the armed forces. The Army’s shoot em-up game has millions of avid fans. It is one of the world’s most frequently downloaded games. According to a study by researchers at the Massachusetts Institute of Technology, “The game has more impact on recruits than all other forms of Army advertising combined.” Meanwhile, The World Health Organization classifies “Gaming Disorder” as a disease.

America’s Army 4 is rated “Teen – Violence, Blood” by the Entertainment Software Ratings Board, (ESRB).  It is reprehensible that the United States Army uses these murder simulators to recruit youth. It must stop.

There’s an undeniable appeal, an enticement, an adrenaline rush that accompanies taking virtual human life, and although the Army’s game can’t quite match the splattering blood in Manhunt 2, one of the nation’s most popular first-person video games, it’s not bad for free, children say. Manhunt 2 is rated “AO” Adults Only, (Over 18). It’s popular with middle and high school boys. The games display blood and gore, intense violence, strong language, strong sexual content, and use of drugs,” according to ESRB.

Many conservatives contend there is no evidence to support claims that violent video games and real-world violence are connected. This is America, the land of a million contradictions. We can find research from various sources that defend marketing these games to children. For instance, researchers at the University of Texas argue that video gaming is associated with significant declines in crime and death rates.

“Michael Carneal, a fourteen-year-old shooter, fired eight rounds in fast succession at a high school youth prayer group, killing three and wounding five. Authorities noted that his aim was uncannily accurate. Carneal was an avid player of first-person shooter games. He fired just once at each person’s head, as one would do to rack up bonus points in these games.”

Q: Where does a 14-year-old boy, who never fired a gun before, get the skill and the desire to kill?

A: Through video games and media violence.

Grossman argues that youth who pull the virtual trigger to slaughter thousands on the screen become hardened emotionally. He calls these violent military shooting games “Murder Simulators.” There’s an undeniable appeal, an enticement, an attraction to taking virtual human life. Mass killers often hone their skills and whet their appetites for killing through first-person shooter games.

Since 2004, when Congress passed a law allowing the DOD to profit from retail sales by issuing licenses and trademarks, the military has been promoting its brand with the public through an aggressive marketing campaign. The DoD Branding and Trademark Licensing Program was established to enhance the name, reputation, and public goodwill of the military services while “supporting the recruiting and retention efforts of the military departments.” There’s a rich irony here. WCPO TV in Cincinnati reported that the Pentagon profits on selling overpriced, cheaply made merchandise from China, while pitching enlistment to its consumers.

The Army wants to place as many young fingers around as many triggers as possible – whether they are virtual or real. The trigger is a great equalizer for a kid like Nik Cruz, who was apparently ostracized by the Marjory Stoneman Douglas community. The in-crowd didn’t like him. The trigger settles scores. Pulling it is thrilling, even glorious. (It’s like that in American foreign policy, too.)

Cruz was an outcast in one of America’s most vicious and unjust institutions – the high school. Too many of our children suffer in this sometimes cruel and regimented order that often has little patience for increasingly large numbers of children with emotional struggles and learning difficulties. Education is not a priority in latter day America. Nik Cruz was a “loser”, but he had the Army and the killing thing.

“You know I’m headed off for war.
Well, now I want to kill somebody!
Won’t have to break no kind of law!

When Nik was 14 and entered Marjory Stoneman Douglas High School, he joined the Junior Reserve Officers’ Training Corps, (JROTC). The Army put a lethal weapon into his hands. Students say Nik was a great shot.

Hardened gun enthusiasts may look at the air gun Nik is holding above and dismiss it as a harmless play toy because it cannot blow a hole into the human body like the “real” M1911 can.

Children in their mid-teens, deprived of more lethal firearms, turn to these so-called “airsoft” guns. They’re misnamed, of course. Cruz’s lethal handgun is available on Amazon for $50. The pistol fires BB-like, spherical projectiles, typically made of plastic, at 500 feet per second.

Similar, but much more powerful CO2-propelled handguns are available for sale for the use by children through the congressionally established Civilian Marksmanship Program.

Individuals in the U.S. must be 18 years of age or older to purchase an airsoft gun. On the other hand, airsoft guns are not classified as firearms and are legal for use by all ages under federal law. Wise decision makers in New York City, Washington, D.C., Chicago, and San Francisco outlaw airsoft guns entirely.

Here, Nik is holding the Crosman P1322 American Classic Multi Pump Pneumatic .22-Caliber Pellet Air Pistol, Black. It’s available on Amazon for $49.99.  The .22 version, compared to the M1911 look-alike described above, provides bigger knockdown power, even though it has a lower muzzle velocity. (460 fps, compared to 500 fps for Nik’s other pistol.)  Notice the Army camouflage blankets creating a kind of bedroom bunker.

Nik posted a photo on his Instagram account of a disemboweled frog.  In the Instagram chat, he describes killing a number of birds with his gun.

You pump it. And you pump it, and it requires strength. Your adrenaline is pumping. You have power! You pull the trigger and the pellet is deadly to both animals and humans. Weapons like this inflict immeasurable pain and suffering across the country.

A rite of passage. For many American youth, turning 18 and finally being able to purchase fire-powered ammunition is a right of passage to adulthood. Until now, everything owned and shot has been air-powered.

We don’t know exactly where Cruz bought his ammo, but he could have purchased it, with easily sought credentials, from the Civilian Marksmanship Program.  Congress’s arms dealer will soon be selling M1911 semi-automatic handguns to the public.

We’re not likely to discover anytime soon the specific video games Nik played, although the shotgun is a favorite weapon of virtual mass murderers, along with the AR 15 and rifles used by snipers. Video programmers have developed disgusting, yet breathtaking graphics of body parts exploding in these first-person shooter games.

We continue to trace Cruz’s development as a mass killer.

In many ways, Cruz had a normal life. He wasn’t worried about his next meal or where he was going to sleep. He had a job and spending cash. With the lax laws in Florida, he could legally purchase pretty much anything he wanted. In Cruz’s calculus, the pump-action air pistol was $50, but his dream gun, the military-standard AR-15 would cost 20 times that. Certainly, there are cheaper guns that could do a lot of damage.

Shotguns fired up close can inflict tremendous carnage by spraying hundreds of lead pellets at 1,200 feet per second.

According to press reports, Cruz legally purchased as many as ten guns after he turned 18. Six of them are shown in the Instagram photo below.

The photo here shows three shotguns at the top, the Smith & Wesson M&P 15 .223 (AR-15) in the middle, and the Crossman P1322 air pistol to the right of the AR-15. The rifle at the bottom of the image appears to be the Savage AXIS XP Bolt Action Rifle with a Bushnell Scope. The rifle is available for $349 in several calibers at Dick’s and other retail outlets. Cruz also had an AK-47, not pictured.

Broward County Sheriff Scott Israel said investigators were dissecting Cruz’s social media posts. ‘‘And some of the things that have come to mind are very, very disturbing.’’

The standard 5.56 x 45 mm AR-15 bullet travels at more than 3,000 fps, compared to the 500 fps for the air gun and 1,200 fps for the shotgun described above. The projectile of the AR-15 has a mass of 55 grains, compared to 14 grains for the air pellets. The bullet from an AR-15 does an entirely different kind of violence to the human body. The entrance wound to the torso is usually small, while the exit wound might be the size of an orange. A military-standard AR-15, similar to the one Cruz used, probably cost $1,000 or more.

We must pause for the innocent children slaughtered by Cruz. Our hearts go out to their families, their shattered community, and our divided country.

Unlike the fully automatic M16, Cruz’s semi-automatic AR-15 fired a round every time the trigger was pulled – just like the video games. Most AR-15-type rifles are sold with a 30-round magazine.

Nik Cruz could have used his Instagram account to find the sellers to purchase the weapons that would help him play out his video game fantasies. Military assault weapons are readily available for purchase. Sellers and buyers do not always follow federal and state laws.

Fox News reported on the Instagram gun trade five years ago. Below, an AR-15 military assault rifle is being offered for $1,500.

Militarism is deeply entrenched in the American experience. The depth of military indoctrination in this country separates us from the rest of the world. Militarism is a powerful root cause behind America’s gun violence epidemic. It’s time to connect the dots.  We should begin addressing the problem by immediately shutting down military-run marksmanship programs in the high schools.