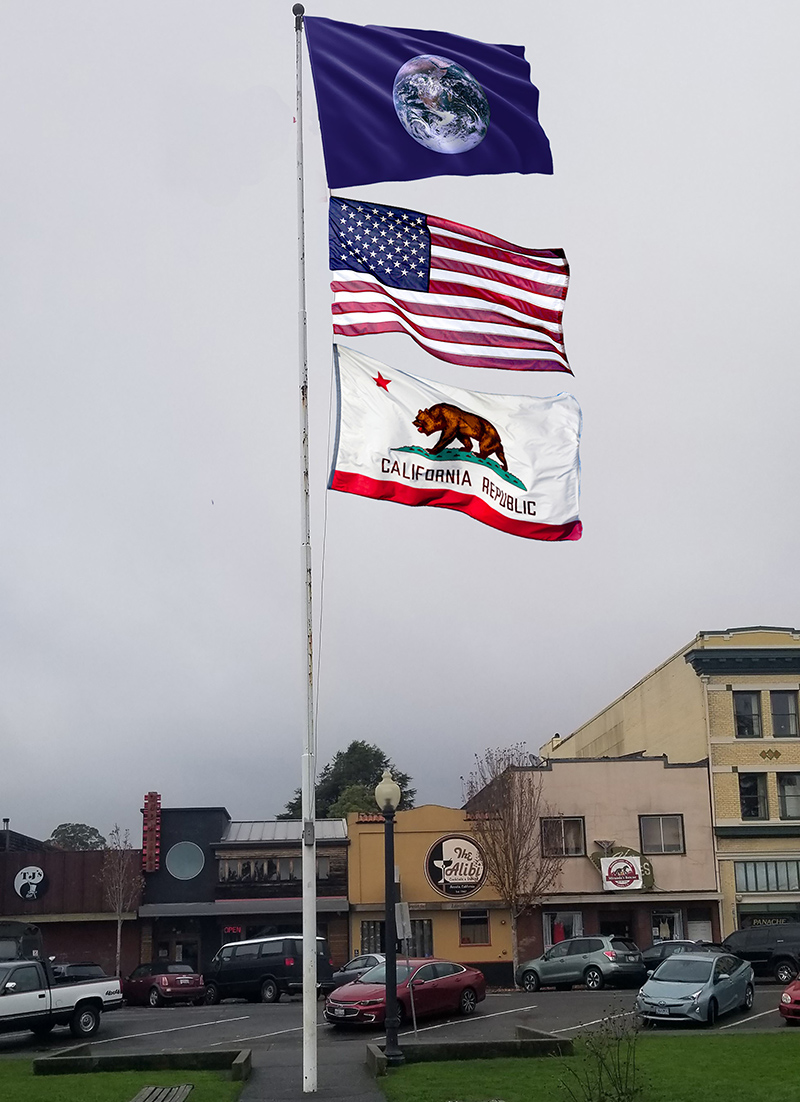 Here in Arcata, California, we are working to introduce and pass a ballot initiative ordinance that will require the City of Arcata to fly the Earth flag at the top of all city owned flagpoles, above the United States and the California flags.

Arcata is a city of about 18,000 people on the north coast of California. Home to Humboldt State University (now Cal Poly Humboldt), Arcata is known as a very progressive community, with a long-time focus on the environment, peace, and social justice.

The Earth flag flies on the Arcata Plaza. That is good. Not many town squares include it.

But wait! The Plaza flagpole order is not logical. The American flag flies at the top, the California flag beneath it, and the Earth flag at the bottom.

Doesn’t the Earth encompass all nations and all states? Isn’t the well being of the Earth essential to all life? Aren’t global issues more important to our healthy survival than nationalism?

It’s time to recognize the primacy of the Earth over nations and states when we fly their symbols on our town squares. We cannot have a healthy nation without a healthy Earth.

It is time to “Put the Earth on Top.”

Global warming and nuclear war are the greatest threats to our survival today. To reduce these threats, nations must meet together in good faith and agree that the survival of life on Earth is more important than nationalist or corporate interests.

Human-caused climate change and its product of global warming will make the Earth uninhabitable within the lifetimes of our children and grandchildren, unless people agree to actions that will stop the temperature increases. But at the recent COP26 conference, no meaningful action plans were adopted. Instead we only heard what Greta Thunberg accurately called, “Blah, blah, blah”. Rather than agree to aggressively reduce the use of fossil fuels, self-serving corporate and national groups, consumed by greed and power mongering, controlled the dialogue, and no real progress was made.

Nuclear war, fueled by our renewed cold war with Russia and China, could destroy all life on Earth in just a couple of years, with the onset of nuclear winter. (The ultimate irony is that nuclear winter is the only short term cure for global warming! But let’s not take that route!) Unlike climate change, nuclear war is not already happening, but we are on the brink. If it does happen, by design or accident, it will bring about far quicker devastation and extinction. The only path away from the increasing chance of nuclear war is for nations to put aside their political posturing and agree to join the Treaty on the Prohibition of Nuclear weapons, reduce nuclear arms, pledge no first-use, and use true diplomacy to resolve conflicts. Once again, the focus must be shifted from national interests to the safety and well-being of our planet Earth.

However much we love our own country, we cannot claim that any “national interest” is more important than keeping the Earth inhabitable and welcoming.

This belief has led me to take action by initiating a local ballot initiative to fly the Earth flag above the US and California flags on all city-owned flagpoles here in Arcata. We are calling the movement “Put the Earth on Top.” Our hope is that we will succeed in getting the initiative on the ballot for the November 2022 election, and that it will pass by a large margin and cause the city to immediately begin flying the Earth flag at the top of all official flagpoles.

In the big picture, we are hoping that this will begin a much larger conversation about the importance of focusing actions on the health of our planet Earth.

But, isn’t it illegal to fly any flag above the Stars and Stripes? The United States Flag Code does state that the American flag should fly at the top of a flagpole, but regarding the enforceability and application of the Code, Wikipedia states (quoting a 2008 Congressional Research Service report):

“The United States Flag Code establishes advisory rules for display and care of the national flag of the United States of America…This is a U.S. federal law, but only suggests voluntary customs for handling of the American flag and was never intended to be enforceable. The code uses non-binding language like ‘should’ and ‘custom’ throughout and does not prescribe any penalties for failure to follow the guidelines.”

Politically, some may think that flying anything above the American Flag is unpatriotic. The image on the Earth flag is known as The Blue Marble, taken on December 7, 1972 by the Apollo 17 spacecraft crew, and is among the most reproduced images in history, now celebrating its 50th anniversary. Flying the Earth flag above the Stars and Stripes does not disrespect the United States.

Similarly, if cities in other countries take up this project, the aim is to increase the awareness of Earth as our home planet, and not to disrespect the nation in which we live.

Some will object that we should not waste energy on rearranging flags, but instead take on the “real local problems” that face our community. I believe we can do both. We can address these “down to Earth” issues as we also focus more on preserving the health of the Earth itself.

My hope is that by next year, all Arcata City flagpoles will have the Earth flag at the top. Then, other cities around the United States and around the world will work to adopt similar ordinances, flying the Earth flag above the flag of their home nation. In a world that expresses love and respect for the Earth in this way, agreements leading to a healthy climate and world peace will be more attainable.

By acting locally in our home cities to embrace the symbol of the Earth flag on top, above any national flag, perhaps we can preserve the Earth as a welcoming home for ourselves and future generations.

Let’s Put the Earth on Top.

Dave Meserve designs and builds houses in Arcata, CA. He served on the Arcata City Council from 2002 to 2006. When not working for a living, he works to agitate for peace, justice, and a healthy environment.