Shannonwatch are calling for an immediate review of the safety standards applied to US military and military contracted planes at Shannon Airport. A fire on an Omni Air International troop carrier brought the airport to a standstill on Thursday August 15th. This once again highlights the dangers posed by daily military traffic at a civilian airport like Shannon.

The troop carrier, which is reported to be carrying approximately 150 troops, was on its way to the Middle East. It had arrived earlier from Tinker Air Force Base, Oklahoma USA.

“We know that it’s standard practice for the troops on these planes to have their weapons with them,” said John Lannon of Shannonwatch. “But what we don’t know, because the Irish government refuses to conduct proper inspections of US military planes at Shannon, is whether or not there were munitions on board.”

Edward Horgan of Veterans for Peace said “It appears there was a significant fire on the undercarriage of the aircraft as it was taking off, and that this required the airport fire brigade to use flame retardant foam to extinguish the fire. The flame retardant foams used at US military bases around the world have been causing very serious pollution. Are similar polluting fire-fighting foams being used at Shannon as part of the US military business?”

It was reported in July that Shannon was the first airport in the country to take delivery of new High Reach fire tenders. “Is this another example of US military dictating practice at Shannon to counteract the risk posed by their use of the airport?” asked Mr Horgan.

According to data gathered by Shannonwatch, the military contracted plane on which the fire broke out has, over the past week, been at Biggs Air Force Base in Texas, Shaw Air Force Base in South Carolina, as well as US Air Bases in Japan (Yokota) and South Korea (Osan). It has also travelled to the Al Udeid Air Base in Qatar, via Kuwait. As well as being a US base, Al Udeid also houses the Qatari Air Force that has been part of the Saudi-led military offensive in Yemen. This has left millions of people facing famine since 2016.

Close to 3 million US troops have gone through Shannon Airport since 2001. Troop carriers continue to land and take off from Shannon on a daily basis.

In addition to the US troop carrier flights, aircraft operated directly by the US Air Force and Navy also land at Shannon. The Irish government has admitted that there are weapons on board the troop carriers. But they claim that the other US military aircraft are carrying no arms, ammunition or explosives and are not part of military exercises or operations.

“This is utterly incredible,” said John Lannon. “It is normal procedure for crews of US military aircraft to carry personal weapons, and since thousands of these have been refuelled at Shannon since 2001 it is inconceivable that there wasn’t a single weapon on even one of them. We therefore find it impossible to believe any “assurances” about the US military use of Shannon.”

“Given the regularity of US military aircraft at Shannon, incidents like the fire on Thursday morning are potential disaster waiting to happen.” said Edward Horgan. “Furthermore, the presence of hundreds of US military personnel presents major security risks for everyone using or working at the airport.”

The use of Shannon Airport is also in contravention of Ireland’s stated policy of neutrality.

“The use of Shannon to directly support US unjustified wars in the Middle East, including wars crimes committed by some of the US military and their allies is unjustified and unacceptable,” said Edward Horgan of Veterans for Peace.

According to an RTÉ TG4 Exit Poll after the May elections, 82% of those polled said Ireland should remain a neutral country in all aspects.

Roger Cole, Chair of the Peace and Neutrality Alliance (PANA), said “The danger to Shannon Airport and the passengers posed by US military planes that carry military equipment to the perpetual wars of the US have been highlighted by Shannonwatch and PANA. PANA once more calls upon the immediate termination of the use of Shannon Airport by US troops”.

“More important than anything however, is the Irish Government should stop collaborating with the US in killing hundreds of thousands of men, women and children,” he added.

Shannonwatch reiterate their calls for an end to all US military use of Shannon Airport, in the interests of local safety and global stability. 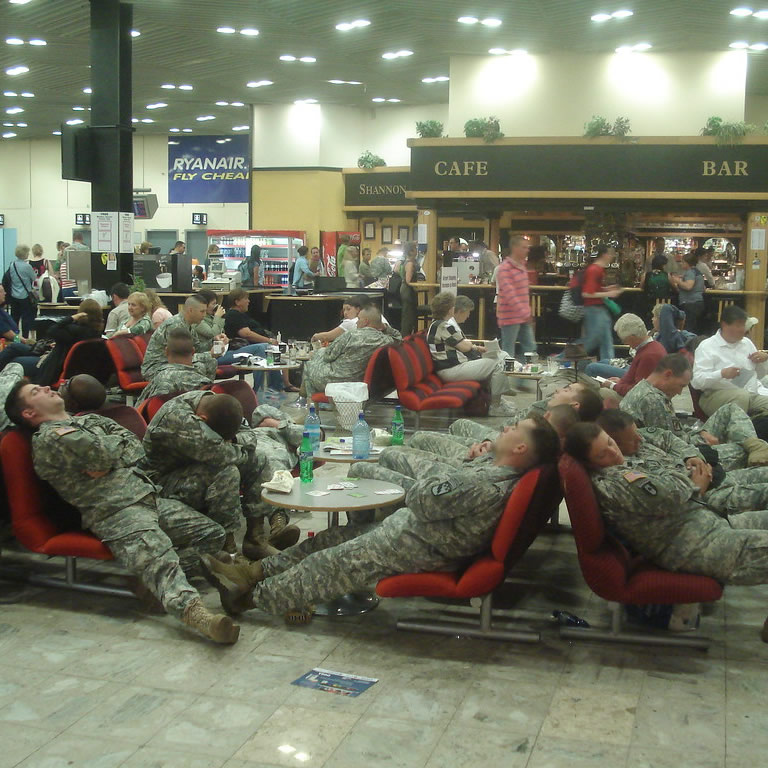