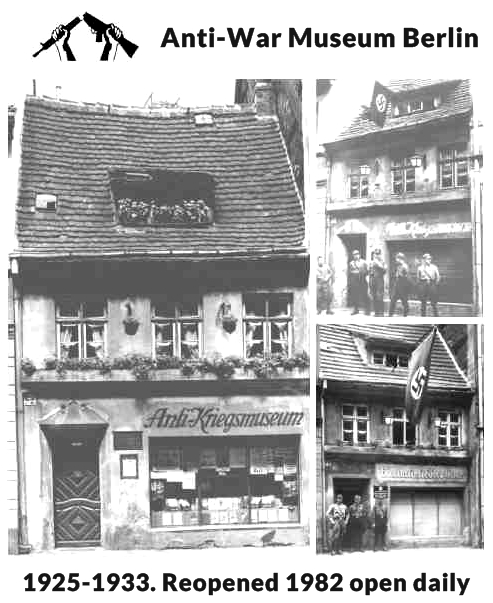 Ernst Friedrich, the founder of the Anti-War Museum in Berlin, was born on February 25th 1894 in Breslau. Already in his early years he was engaged in the proletarian youth movement. In 1911, after breaking off an apprenticeship as a printer, he became a member of the Social Democratic Party (SPD). In 1916 he joined the anti-militaristic workers youth and was sentenced to prison after an act of sabotage in a company of military importance.

As a leading figure of »youth anarchism« he fought against militarism and war, against arbitrary action by police and justice. In 1919 he took over the youth centre of the »Free Socialist Youth« (FSJ) in Berlin and turned it into a meeting place of anti-authoritarian youth and revolutionary artists.

In the Twenties the pacifist Ernst Friedrich was already well-known in Berlin for his book »War against War!« when he opened his Anti-War Museum at 29, Parochial Street. The museum became a centre of cultural and pacifist activities until it was destroyed by the Nazis in March 1933 and its founder got arrested.

Friedrich’s book »War against War!« (1924) is a shocking picture-book documenting the horrors of the First World War. It made him a well-known figure in and outside Germany. Owing to a donation he was able to buy an old building in Berlin where he established the »First International Anti-War Museum«.

After having been in prison already before Friedrich was financially ruined when he was convicted again in 1930. Nevertheless he managed to bring his precious archive abroad.

In March 1933 Nazi storm troopers, the so-called SA, destroyed the Anti-War Museum and Friedrich was arrested until the end of that year. Thereafter he and his family emigrated to Belgium, where he opened the »II. Anti-War Museum«. When the German army marched in he joined the French Resistance. After the liberation of France he became French citizen and member of the Socialist Party.

With the compensation payment he got from Germany Friedrich was able to buy a piece of land near Paris, where he established the so-called »Ile de la Paix«, a centre for peace and international understanding where German and French youth groups could meet. In 1967 Ernst Friedrich died at Le Perreux sur Marne.

Today’s Anti-War Museum recalls Ernst Friedrich and the story of his museum with charts, slides and films.