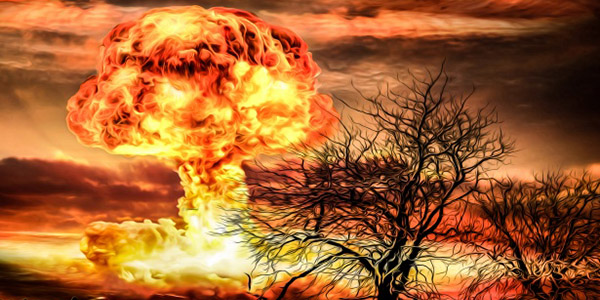 The game may be almost over.

Medea Benjamin and Nicolas J.S.Davies put it this way:

“The irresolvable dilemma facing Western leaders is that this is a no-win situation. How can they militarily defeat Russia, when it possesses 6,000 nuclear warheads and its military doctrine explicitly states that it will use them before it will accept an existential military defeat?”

Neither side is willing to let go of its commitment: to protect, to expand, a piece of the whole planet, no matter what the cost. The game of conquest — the game of war, and all that comes with it, e.g., the dehumanization of most of humanity, the indifference to its toll on the planet itself — has been going on for thousands of years. It’s our “history.” Indeed, history is taught from war to war to war.

Wars — who wins, who loses — are the building blocks of who we are, and they have managed to consume the various counter-philosophies that crop up, such as religious belief in love and interconnectedness, and turn them into allies. Love thy enemy? Nah, that’s silly. Love isn’t possible until you defeat the devil. And, oh yeah, violence is morally neutral, as per St. Augustine and the “just war theory” he came up with 1600 years ago. This made things so convenient for would-be conquerors.

And that philosophy has hardened into reality: We’re number one! Our empire is better than yours! And humanity’s weaponry — its ability to fight and kill — has advanced, from clubs to spears to guns to . . . uh, nukes.

Slight problem! Nuclear weapons clarify a truth we have previously been able to ignore: The consequences of war and dehumanization always, always, always come home. There are no “nations,” except in our imagi-nations.

So are we stuck with all this power we’ve aligned against ourselves in defense of a falsehood? That seems to be the case, as the war in Ukraine continues and escalates, pushing itself (and all of us) closer to Armageddon. Much of the world is aware of the danger of this falsehood; we even have a global organization, the United Nations, that keeps trying to unite the world, but it has no power to force unity (or sanity) on the planet. The fate of all of us seems to be in the hands of a few leaders who actually possess nuclear weapons, and will use them if “necessary.”

And sometimes I fear the worst: that the only way such leaders will lose their power — to develop and maybe use their nukes — is for one or several of them to, oh my God, launch a nuclear war. Ladies and gentlemen, we’re a split-second decision away from such an occurrence. Seemingly, in the wake of such a war — if human life has survived and is able to begin rebuilding civilization — sanity and a sense of global wholeness might find its way to the core of the human social structure and our collective thinking, having no other choice, will finally see beyond war and war preparation.

And as I pray, who shows up but the French philosopher and political activist Simone Weil, who died in 1943, two years before the nuclear age birthed itself, but who knew something was deeply wrong. And of course much was already wrong. The Nazis controlled her country. She was able to flee France with her parents, but she died at age 34, apparently of a combination of tuberculosis and self-starvation.

But what she left behind in her writing is a precious pearl of awareness. Is it too late? Here’s where I drop to my knees.

“saw in her historical moment a loss of a sense of scale, a creeping ineptitude in judgment and communication and, ultimately, a forfeiture of rational thought. She observed how political platforms being built upon words like ‘roots’ or ‘homeland’ could use more abstractions — like ‘the foreigner,’ ‘the immigrant,’ ‘the minority’ and ‘the refugee’ — to turn flesh-and-blood individuals into targets.”

No human being is an abstraction? Is this where the rebuilding starts?

And then a song started playing in my head, in my soul. The song is “Deportee,” written and sung by Woody Guthrie 75 years ago, after a plane crashed over California’s Los Gatos Canyon, killing 32 people — mostly Mexicans, being sent back to Mexico because they were either here “illegally” or their guest worker contracts had expired. Initially the media identified by name only the actual Americans who died (pilot, copilot, stewardess). The rest were simply deportees.

Goodbye to my Juan, goodbye, Rosalita,

You won’t have your names when you ride the big airplane,

All they will call you will be “deportees.”

What does this have to do with a Doomsday Clock at 100 seconds to midnight, ongoing slaughter and nuclear powers at odds with each other in Ukraine, a world in endless and bloody conflict almost everywhere? I have no idea.

Except, maybe, this: If a nuclear war happens, everyone on the planet is no more than a deportee.

Robert Koehler (koehlercw@gmail.com), syndicated by PeaceVoice, is a Chicago award-winning journalist and editor. He is the author of Courage Grows Strong at the Wound.