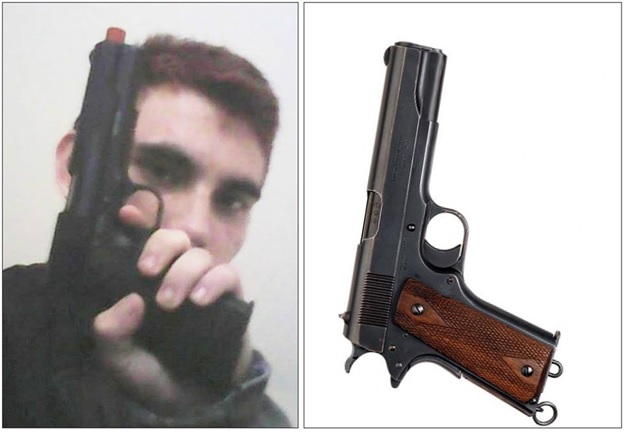 (Left), Instagram photo of Cruz with an “Airsoft” M1911 look-alike pistol. (Right), the military’s M1911, a favorite of gun enthusiasts that will soon be made available for sale to the public.

A young Nikolas Cruz, the Parkland shooter, posted the image shown (above left) on his Instagram account. The date is unknown. The orange tip on the end of the gun signifies he is holding an “air-soft” gun that fires BB-like, spherical projectiles that are typically made of plastic. American youth are introduced to these guns at an early age. The lethal weapon Cruz is holding shoots a projectile at 500 feet per second.

The term “air soft” is concocted by the wizards of Madison Avenue who represent the arms industry. The term conveys the idea that these guns are harmless. Remember Ralphie in “Christmas Story”? “You’ll shoot your eye out kid!” The BB gun Ralphie got for Christmas, The Daisy Red Ryder, shoots BB’s at 350 feet per second.

Airsoft guns represent the starter drug of choice for the American arms industry. It has long been the strategy of this industry and its bankrollers at the Pentagon to wrap as many young fingers around as many triggers as possible – whether those triggers are virtual or real. The intoxicating effects of firearms provide the military a way to exploit the powerful, visceral connection to a child’s soul. In this regard, Nikolas Cruz was the victim of a malicious system.

Because airsoft guns look a lot like the real thing – and are dangerous in their own right – laws exist that affect their manufacture, purchase, and ownership.
Find Law reports that individuals in the U.S. must be 18 years of age or older to purchase an airsoft gun. On the other hand, airsoft guns are not classified as firearms and are legal for use by all ages under federal law. New York City, Washington, D.C., Chicago, and San Francisco outlaw airsoft guns entirely.

National data from the Centers for Disease Control and Prevention on non-powder gun injuries illustrates the inherent danger of these weapons. Between 2001 and 2011, non-powder guns injured 209,981 people nationwide, including 145,423 children age 19 or younger, and the numbers are rapidly climbing. Between 2007 and 2009 in Texas alone, 124 people (including 23 children under the age of 18) were killed in accidents involving BB guns, pellet guns, and other non-powder guns.

Cruz’s airsoft pistol is available on Amazon for $50.  Similar, but much more powerful CO2-propelled handguns are available for sale for the use by children through the congressionally established Civilian Marksmanship Program, CMP.

The image at the top right is an M1911 US Army pistol, a cherished collector’s item.  It served as the standard-issue sidearm for the United States Armed Forces for 75 years, from 1911 to 1986. The weapons are revered by millions. They’re reliable. They’ll kill the enemy, and they’re American-made. Today, many American youth are enamored by these semi-automatic handguns, the way Ralphie was enthralled by his BB gun. 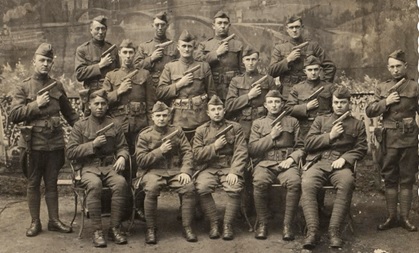 American “Doughboys” display their M1911’s during WW I.

All that love for the M1911 pistol led the Trump administration to OK the release of the weaponry from the Army’s ammunition depot in Anniston, Alabama to the CMP, also based in Anniston. The semiautomatic handguns are to be sold to the American public. The US stands alone as the only nation that offers its warehoused military weapons for sale to the public. Prudent nations destroy antiquated guns. The CMP has been recirculating used rifles to the public since 1903, but this is the first time the agency will be selling handguns. Soon, youth like Cruz will be allowed to purchase these extraordinarily lethal, semi-automatic weapons through the quasi-governmental CMP. 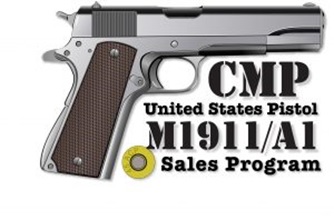 Although President Obama authorized the sale of the M1911 when he approved his last National Defense Authorization Act two years ago, his administration held up the Army’s actual shipment of the handguns to the CMP. Obama’s Justice Department published a paper, obtained by the Huffington Post, saying the guns would eventually end up arming criminals. The Obama era DOJ argued, “The Army is concerned about loss of accountability of weapons after transfer to CMP; expanding the scope of CMP’s mission to include handguns; and the potential negative impacts on public safety from the large amount of semi-automatic and concealable pistols that will be released for public purchase.”  The Army cited DOJ statistics that is has tracked an average of nearly 1,800 of these handguns being used in crimes every year over the last decade, including a significant number of those guns that were originally military surplus.

The Department of Justice under Attorney General Jeff Sessions has been silent on the issue.

The Army’s initial cache of 100,000 of these handguns could net the CMP more than $50 million. Congress has been largely silent for the past twenty years regarding CMP weapons sales, a testament to the lobbying fire-power of the NRA.

When Congress privatized the CMP in 1996, after Republicans took control of both chambers, Senator Paul Simon (D-IL) described the CMP as “an incomprehensible, irresponsible, baffling boondoggle for the NRA.”

Next – Cruz, Instagram, and the CMP as the nation’s premier arms dealer.