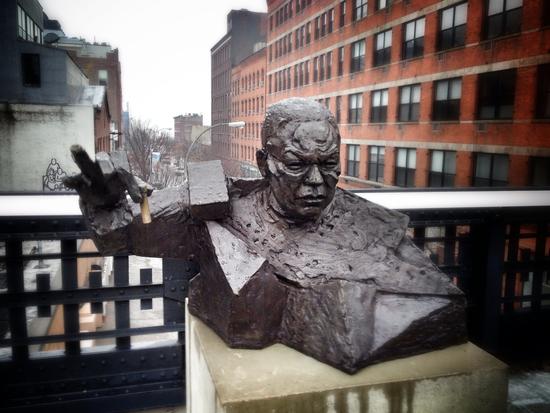 In the wake of WMD-liar Curveball’s videotaped confession, Colin Powell was demanding to know why nobody warned him about Curveball’s unreliability. The trouble is, they did.

Can you imagine having an opportunity to address the United Nations Security Council about a matter of great global importance, with all the world’s media watching, and using it to… well, to make shit up – to lie with a straight face, and with a CIA director propped up behind you, I mean to spew one world-class, for-the-record-books stream of bull, to utter nary a breath without a couple of whoppers in it, and to look like you really mean it all? What gall. What an insult to the entire world that would be.

Colin Powell doesn’t have to imagine such a thing. He has to live with it. He did it on February 5, 2003. It’s on videotape.

I tried to ask him about it in the summer of 2004. He was speaking to the Unity Journalists of Color convention in Washington, D.C. The event had been advertised as including questions from the floor, but for some reason that plan was revised. Speakers from the floor were permitted to ask questions of four safe and vetted journalists of color before Powell showed up, and then those four individuals could choose to ask him something related – which of course they did not, in any instance, do.

Bush and Kerry spoke as well. The panel of journalists who asked Bush questions when he showed up had not been properly vetted. Roland Martin of the Chicago Defender had slipped onto it somehow (which won’t happen again!). Martin asked Bush whether he was opposed to preferential college admissions for the kids of alumni and whether he cared more about voting rights in Afghanistan than in Florida. Bush looked like a deer in the headlights, only without the intelligence. He stumbled so badly that the room openly laughed at him.

But the panel that had been assembled to lob softballs at Powell served its purpose well. It was moderated by Gwen Ifill. I asked Ifill (and Powell could watch it later on C-Span if he wanted to) whether Powell had any explanation for the way in which he had relied on the testimony of Saddam Hussein’s son-in-law. He had recited the claims about weapons of mass destruction but carefully left out the part where that same gentleman had testified that all of Iraq’s WMDs had been destroyed. Ifill thanked me, and said nothing. Hillary Clinton was not present and nobody beat me up.

I wonder what Powell would say if someone were to actually ask him that question, even today, or next year, or ten years from now. Someone tells you about a bunch of old weapons and at the same time tells you they’ve been destroyed, and you choose to repeat the part about the weapons and censor the part about their destruction. How would you explain that?

Well, it’s a sin of omission, so ultimately Powell could claim he forgot. “Oh yeah, I meant to say that, but it slipped my mind.”

But how would he explain this:

During his presentation at the United Nations, Powell provided this translation of an intercepted conversation between Iraqi army officers:

“They’re inspecting the ammunition you have, yes.

“For the possibility there are forbidden ammo.

“For the possibility there is by chance forbidden ammo?

“And we sent you a message yesterday to clean out all of the areas, the scrap areas, the abandoned areas. Make sure there is nothing there.”

The incriminating phrases “clean all of the areas” and “Make sure there is nothing there” do not appear in the official State Department translation of the exchange:

“Lt. Colonel: They are inspecting the ammunition you have.

“Lt. Col: For the possibility there are forbidden ammo.

“Lt. Colonel: For the possibility there is by chance, forbidden ammo.

“Lt. Colonel: And we sent you a message to inspect the scrap areas and the abandoned areas.

Powell was writing fictional dialogue. He put those extra lines in there and pretended somebody had said them. Here’s what Bob Woodward said about this in his book “Plan of Attack.”

“[Powell] had decided to add his personal interpretation of the intercepts to rehearsed script, taking them substantially further and casting them in the most negative light. Concerning the intercept about inspecting for the possibility of ‘forbidden ammo,’ Powell took the interpretation further: ‘Clean out all of the areas. . . . Make sure there is nothing there.’ None of this was in the intercept.”

For most of his presentation, Powell wasn’t inventing dialogue, but he was presenting as facts numerous claims that his own staff had warned him were weak and indefensible.

Powell told the UN and the world: “We know that Saddam’s son, Qusay, ordered the removal of all prohibited weapons from Saddam’s numerous palace complexes.” The January 31, 2003, evaluation of Powell’s draft remarks prepared for him by the State Department’s Bureau of Intelligence and Research (“INR”) flagged this claim as “WEAK”.

Regarding alleged Iraqi concealment of key files, Powell said: “key files from military and scientific establishments have been placed in cars that are being driven around the countryside by Iraqi intelligence agents to avoid detection.” The January 31, 2003 INR evaluation flagged this claim as “WEAK” and added “Plausibility open to question.” A Feb. 3, 2003, INR evaluation of a subsequent draft of Powell’s remarks noted:

“Page 4, last bullet, re key files being driven around in cars to avoid inspectors. This claim is highly questionable and promises to be targeted by critics and possibly UN inspection officials as well.”
That didn’t stop Colin from stating it as fact and apparently hoping that, even if UN inspectors thought he was a brazen liar, US media outlets wouldn’t tell anyone.

“WEAK. Missiles with biological warheads reportedly dispersed. This would be somewhat true in terms of short-range missiles with conventional warheads, but is questionable in terms of longer-range missiles or biological warheads.”
This claim was again flagged in the February 3, 2003, evaluation of a subsequent draft of Powell’s presentation: “Page 5. first para, claim re missile brigade dispersing rocket launchers and BW warheads. This claim too is highly questionable and might be subjected to criticism by UN inspection officials.”

That didn’t stop Colin. In fact, he brought out visual aids to help with his lying

Powell showed a slide of a satellite photograph of an Iraqi munitions bunker, and lied:

“The two arrows indicate the presence of sure signs that the bunkers are storing chemical munitions . . . [t]he truck you […] see is a signature item. It’s a decontamination vehicle in case something goes wrong.”
The January 31, 2003, INR evaluation flagged this claim as “WEAK” and added: “We support much of this discussion, but we note that decontamination vehicles – cited several times in the text – are water trucks that can have legitimate uses… Iraq has given UNMOVIC what may be a plausible account for this activity – that this was an exercise involving the movement of conventional explosives; presence of a fire safety truck (water truck, which could also be used as a decontamination vehicle) is common in such an event.”

He just kept piling it on: “UAVs outfitted with spray tanks constitute an ideal method for launching a terrorist attack using biological weapons,” he said.

The January 31, 2003, INR evaluation flagged this statement as “WEAK” and added: “the claim that experts agree UAVs fitted with spray tanks are ‘an ideal method for launching a terrorist attack using biological weapons’ is WEAK.”

In other words, experts did NOT agree with that claim.

Powell kept going, announcing “in mid-December weapons experts at one facility were replaced by Iraqi intelligence agents who were to deceive inspectors about the work that was being done there.”

The January 31, 2003, INR evaluation flagged this claim as “WEAK” and “not credible” and “open to criticism, particularly by the UN inspectorates.”

His staff was warning him that what he planned to say would not be believed by his audience, which would include the people with actual knowledge of the matter.

To Powell that was no matter.

Powell, no doubt figuring he was in deep already, so what did he have to lose, went on to tell the UN: “On orders from Saddam Hussein, Iraqi officials issued a false death certificate for one scientist, and he was sent into hiding.”

The January 31, 2003, INR evaluation flagged this claim as “WEAK” and called it “Not implausible, but UN inspectors might question it. (Note: Draft states it as fact.)”

And Powell stated it as fact. Notice that his staff was not able to say there was any evidence for the claim, but rather that it was “not implausible.” That was the best they could come up with. In other words: “They might buy this one, Sir, but don’t count on it.”

Powell, however, wasn’t satisfied lying about one scientist. He had to have a dozen. He told the United Nations: “A dozen [WMD] experts have been placed under house arrest, not in their own houses, but as a group at one of Saddam Hussein’s guest houses.”

The January 31, 2003, INR evaluation flagged this claim as “WEAK” and “Highly questionable.” This one didn’t even merit a “Not implausible.”

Powell also said: “In the middle of January, experts at one facility that was related to weapons of mass destruction, those experts had been ordered to stay home from work to avoid the inspectors. Workers from other Iraqi military facilities not engaged in elicit weapons projects were to replace the workers who’d been sent home.”

Powell’s staff called this “WEAK,” with “Plausibility open to question.”

All of this stuff sounded plausible enough to viewers of Fox, CNN, and MSNBC. And that, we can see now, was what interested Colin. But it must have sounded highly implausible to the U.N. inspectors. Here was a guy who had not been with them on any of their inspections coming in to tell them what had happened.

We know from Scott Ritter, who led many UNSCOM inspections in Iraq, that U.S. inspectors had used the access that the inspection process afforded them to spy for, and to set up means of data collection for, the CIA. So there was some plausibility to the idea that an American could come back to the UN and inform the UN what had really happened on its inspections.

Yet, repeatedly, Powell’s staff warned him that the specific claims he wanted to make were not going to even sound plausible. They will be recorded by history more simply as blatant lies.

The examples of Powell’s lying listed above are taken from an extensive report released by Congressman John Conyers: “The Constitution in Crisis; The Downing Street Minutes and Deception, Manipulation, Torture, Retribution, and Coverups in the Iraq War.”