City in California to Vote on Flying Earth Flag Above U.S. Flag 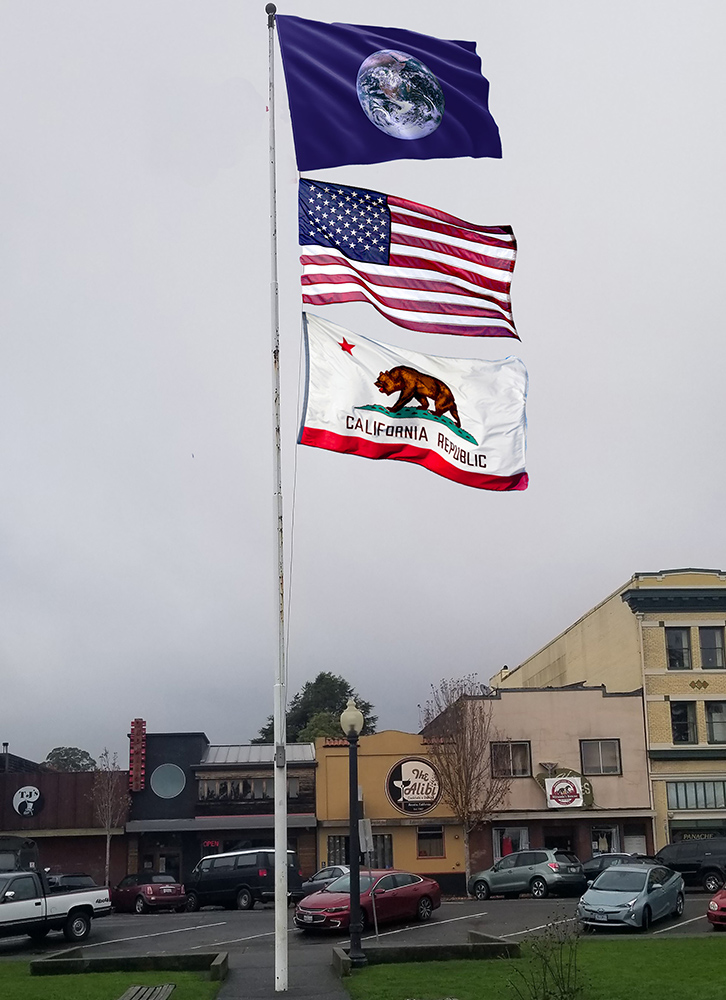 The Humboldt County Elections Department informed us yesterday that we had gathered a sufficient number of valid signatures on our petition to qualify for the November ballot in Arcata.

The initiative directs the City of Arcata to fly the Earth flag at the top of all city-owned flagpoles, above the U.S. and California flags.

We need to pay more attention to the health of the Earth, because we can only have a healthy nation if we have a healthy Earth. Excess nationalism, corporate greed, and rampant militarism threaten all life on Earth, both with unchecked global warming, and with the risk of nuclear war. By flying the Earth flag at the top, we make a strong statement that caring for the Earth is our first priority.

Volunteers gathered signatures for the ballot initiative between March 6 and April 26, when the petitions were turned in. The Humboldt County elections office reviewed the petition forms and found 1,381 valid signatures. This is significantly more than the required 1,137, which represents 10% of Arcata registered voters.

The measure will appear on an upcoming Arcata City Council agenda, where the council will have the option of approving it directly or placing it on the November ballot. Supporters are urging the council to let the voters decide, so it will be clear that the people of Arcata have chosen to Put the Earth on Top.

Text of the ballot initiative:

The people of the City of Arcata do ordain as follows:

It shall be the official policy of the City of Arcata to fly the Earth flag at the top of all city-owned flagpoles, above the flag of the United States of America and the California flag, and any other flags that the city may choose to display.

For the purpose of this measure, the Earth Flag shall be defined as the flag featuring the “Blue Marble” image of the Earth, photographed from the Apollo 17 spacecraft, in 1972.