As the International Criminal Court loses any remaining credibility as a truly international and neutral body, it has finally claimed to be considering investigating certain war crimes of the world’s greatest wager of war.

If the ICC hears from people all over the world, including from the United States, that we want U.S. war makers held accountable the same as any others, the ICC just might save itself and the idea of international justice along with it. 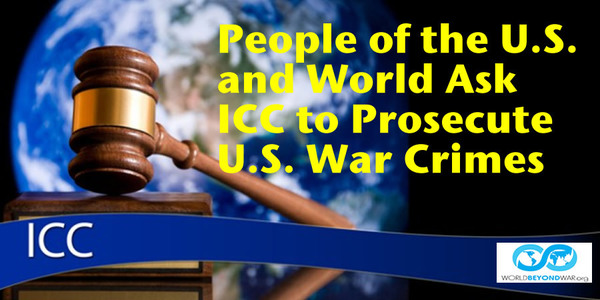 To: Fatou Bensouda, Prosecutor for the International Criminal Court

We encourage you to also prosecute war crimes by non-Africans including by U.S. war criminals. SIGN HERE.

Why is this important?

The ICC is degrading rather than enhancing the idea of international justice by giving a free pass to Western war makers. The United States has itself given a free pass to its war makers, kidnappers, torturers, and assassins. The U.S. president-elect and his advisors openly plan to violate laws against war, torture, and the targeting of civilians. The people of the United States and the world need the ICC to fulfill its mission and step in where domestic justice has failed.

World Beyond War director David Swanson and many of our friends and allies will be testifying. Learn more about it now, and watch it live on both December 1st and December 2nd from 9:30 a.m. to 4:00 p.m. ET (GMT-5) at
http://IraqTribunal.org

On Giving Tuesday support the world-wide campaign to abolish all war! World Beyond War is now interviewing some outstanding candidates for the job of fulltime organizer. And we’re about to launch a global campaign to divest public money from weapons dealers. We can only do this work with your generous support, needed now more than ever!