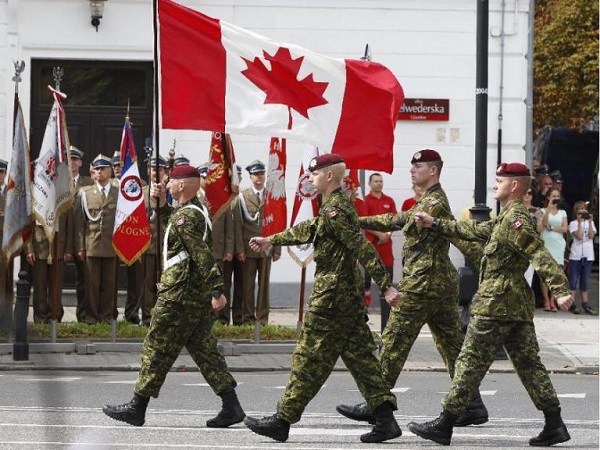 If one were to travel north through North America, with the seasons or the change in climate, harvesting crops of patriotic warmongering, the biggest drop in crop yield might come around the Mason Dixon Line, not the Canadian border.

Yves Engler’s new book, Left, Right: Marching to the Beat of Imperial Canada’s Foreign Policy proposes to provide 10% of the explanation for why many Canadians suffer under the delusion that their nation’s government is a benevolent force in the world — with the other 90% having come in an earlier book on propaganda.

Canada participates in numerous U.S.-led wars and coups. Usually Canada’s role is so minor that one cannot imagine its removal making much of a difference, except that the principle impact is in fact one of propaganda. The United States is a bit less of a rogue for every co-conspiring junior partner it drags along. Canada is a fairly reliable participant, and one that boosts the use of both NATO and the United Nations as cover for crime.

In the United States, traditional barbaric justifications for war are overwhelmingly dominant in motivating the largest portion of the population that supports any war, with humanitarian fantasies playing a minor role. In Canada, the humanitarian claims seem to be required by a slightly larger percentage of the population, and Canada has developed those claims accordingly, making itself a leading promoter of “peace keeping” as a euphemism for war making, and of R2P (the responsibility to protect) as an excuse to destroy places like Libya.

I would very much prefer a policy called war keeping that used peaceful means, to war under the label “peace keeping.”

Canadian foreign policy is roughly that of the U.S. Democratic Party. In fact the lesser evil party in Canadian politics (the New Democratic Party, which isn’t new) claimed to “oppose” the war on Afghanistan right up until Barack Obama became U.S. president. The NDP in Engler’s account is almost as bad as the U.S. Democrats. The labor movement is bigger but almost as bad as that in the United States. The think tanks and pundits of the Canadian left, the liberal heroes, the corporate media, and the nationalistic warlusting of the culture as a whole are all almost as bad as in the United States.

The standard that Engler proposes for a better Canadian foreign policy is unimpeachable. He proposes appealing to the golden rule, and ceasing to impose actions on foreign lands that Canadians would not want done to Canada.

Engler’s book begins with a critique of current Canadian policies, and throughout it he develops many recent examples of Canadian war making. But he also goes many decades into the past, an approach that one might expect to open up more minds to the acceptability of criticizing the behavior of those in power. However, Engler — who even gets Rwanda right, of all rarities — sabotages his whole argument with a single sentence.

Engler will be speaking at #NoWar2018 in Toronto.