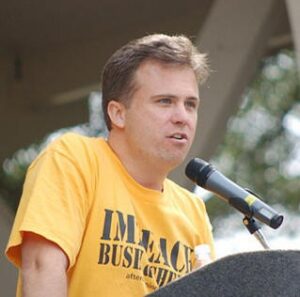 Thank you to Tom Engelhardt for pointing out that the people who couldn’t predict the end of the Soviet Union, the crimes of 9-11, the decency of numerous whistleblowers, the election of Donald Trump, the likelihood that utilities in Vermont would point out that they had not been hacked by Russians, or — I’m willing to bet — the timing of rush hour in Northern Virginia, have just predicted the shape of the future of everything. Of course they’ve gotten it all ridiculously wrong, but they have revealed things about themselves rather than about the world in the process.

Many of us would list climate chaos and nuclear war as the big dangers to avoid. The “community” of U.S. spies lists: “the Arab Spring, the 2008 Global Financial Crisis, and the global rise of populist, anti-establishment politics” as examples of dangers the future holds. These people may be paid billions of dollars by us primarily to keep secrets, but they don’t keep their contempt for democracy secret very well.

They do admit to the obvious: “For better and worse, the emerging global landscape is drawing to a close an era of American dominance following the Cold War.” But they don’t actually mean that this might be for the better. They interpret it as a catastrophic victory for barbarians. Here’s their very next sentence: “So, too, perhaps is the rules-based international order that emerged after World War II.” Dethroning the United States does not, of course, guarantee anarchy. It could mean more respect for rules than before. But belief in the inevitability of anarchy might help make it more likely as it motivates U.S. behaviors. That’s why these “intelligence” people are not just useless but dangerous.

Here’s the next sentence: “It will be much harder to cooperate internationally and govern in ways publics expect.” Oh, well then, let’s forget about any sort of turn toward cooperation. Let’s stick with secretive unaccountable force. That ought to work. And, coincidentally, that’s the business the “intelligence” “community” is in. This sort of “report” is in this regard the same as Cheney’s “Defense” Department report finding that Halliburton should be given lots of contracts.

Also: “information ‘echo chambers’ will reinforce countless competing realities, undermining shared understandings of world events.” Remember, this is written by people in the business of producing propaganda. They are denouncing competition. Their solution is not to abandon propaganda but to invest more heavily in it. In a later paragraph they seem to suggest humility or even decency in proposing not to “impose order” on chaos, but what they propose instead is the use of “information.”

Much of the general failure of these people to predict things accurately seems to result from their mental blocking of the concept of blowback. Because “terrorism” responds to “war,” intentional ignorance of resentment of war creates an inability to make general predictions about terrorism. This new document states: “The threat from terrorism will expand in the coming decades as the growing prominence of small groups and individuals use new technologies, ideas, and relationships to their advantage.” Terrorism comes from prominence and technologies and ideas? What?

Also, desired enemies not engaged in aggression, specifically China and Russia, will — it is predicted — engage in “gray zone aggression.” Uh-huh.

This band of professional spies and saboteurs then blurts out another bit of truth, followed by a radical misinterpretation: “Overconfidence that material strength can manage escalation will increase the risks of interstate conflict to levels not seen since the Cold War.” Since that’s already true it’s not much of a prediction, but at least it’s honest. However, it’s followed by this: “Even if hot war is avoided, the current pattern of ‘international cooperation where we can get it’—such as on climate change—masks significant differences in values and interests among states and does little to curb assertions of dominance within regions.”

Come on! Russian and Chinese desires not to be attacked, not to be ripped off, and instead to grab more wealth for themselves, have nothing to do with divergent “values.” No nation on earth is dominated by people who want to be bombed or exploited. Most if not all are dominated by people who’d like more power and material wealth. Conflict arises between these governments for the obvious reasons, not because non-Americans have weird “values.” On the contrary: certain Americans have truly twisted values, and the rest pay them buckets of money to guide the government in the direction of what they call “intelligence.”