A New Calendar of Holidays 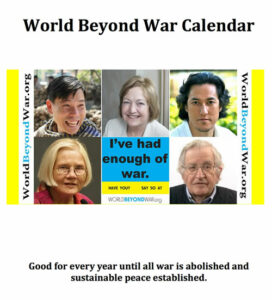 A new calendar of peace holidays has just been published. And none too soon, if you’ve noticed the epidemic of military holidays around us.

I can understand that Catholics have a saint for every day of the year. And I’m not shocked that various ancient religions have holidays for a high proportion of the year’s days. But what to make of the United States, which now has a military holiday for at least 66 separate days, including Memorial Day, Veterans Day, and lesser known days like the just passed Marine Corps Reserve Birthday?

The military memorializes past war lies (Remember the Maine Day), cultural depravity normalized by eternal war (Month of the Military Child), and past crimes like attacking Cuba and killing a mule (Mantanzas Mule Day). This website even — wonderfully and accidentally — includes the Global Day of Action on Military Spending, which is a day dedicated to opposing militarism. The same website — disgustingly and inappropriately — includes Martin Luther King Jr.’s Birthday as a military holiday.

Still, the general pattern is this: in the United States there are holidays to celebrate militarism just about every week, and increasingly one hears about them on the radio, at public events, and in corporate advertising that apparently believes militarism sells.

What would a calendar of peace holidays look like? At WorldBeyondWar we believe it would look something like this.

We’re making it available for free as a PDF that you can print out and make use of: PDF, Word.

We’re also displaying on the front page of WorldBeyondWar.org the holiday, if any, to be marked or celebrated on whatever day it happens to be at the time. So you can always just check there.

We think that part of developing a peace culture is marking great peace moments from the past. Knowing what peace holiday any given day is, or what holidays are coming up soon, can be very useful in creating and promoting events, writing op-eds, and interesting the corporate media in something that is otherwise too important and news worthy to be touched.

World peace holidays can build unity among activists. They can be used for education (celebrating the Hague Peace Conference of 1899 on May 18th could cause someone to want to know what that conference was). And they can be used for encouragement and inspiration (on a gloomy March 20th it might be nice to know that “on this day in 1983, 150,000 peace rallies were held in Australia”).

In this initial draft of the World Beyond War Calendar we’ve included 154 holidays, all of them days — no weeks or months. We could have included a significant peace event for 365 days a year but chose to be selective. It’s a tightly held secret, of course, but there has been a lot more peace than war in the world.

Some of the days are also military days re-purposed. For example:

Others are military days the military doesn’t celebrate. For example:

January 11. On this day in 2002 the United States opened its notorious prison in Guantanamo. This is a good day to oppose all imprisonment without trial.

August 6. On this day in 1945 the U.S. dropped a nuclear bomb on Hiroshima, Japan, killing some 140,000 men, women, and children. President Truman went on the radio to justify this as revenge and lie that Hiroshima was a military base rather than a city. This is a very good day to oppose nuclear weapons.

Others are well-known days reclaimed for peace. For example:

January 15. On this day in 1929 Martin Luther King Jr. was born. The holiday, however, is celebrated on the third Monday of January. These are good opportunities to recall King’s work against militarism, extreme materialism, and racism.

Mothers Day is celebrated on different dates around the world. In many places it is the second Sunday in May. This is a good day to read the Mother’s Day Proclamation and rededicate the day to peace.

December 25. This is Christmas, traditionally a holiday of peace for Christians. On this day in 1776, George Washington led a surprise night crossing of the Delaware River and pre-dawn raid on unarmed hung-over-from-Christmas troops still in their underwear — a founding act of violence for the new nation. Also on this day in 1875 Jessie Wallace Hughan, founder of the War Resisters League, was born. Also on this day in 1914, soldiers on both sides of the trenches of World War I took part in a Christmas Truce. This is a good day to work for peace on earth.

Other days are new to most people. For example:

August 27. This is Kellogg-Briand Day. On this day in 1928, in what was the biggest news story of the year, the major nations of the world gathered in Paris, France, to sign the Kellogg-Briand Pact banning all war. The treaty remains on the books today. The day is increasingly being recognized and celebrated as a holiday.

November 5. On this day in 1855 Eugene V. Debs was born. Also on this day in 1968 Richard Nixon was elected U.S. president after secretly and treasonously sending Anna Chennault to sabotage Vietnam peace talks, campaigning on a nonexistent secret plan for peace, and actually planning to continue the war, as he did once elected. This is a good day to think about who our real leaders are.

November 6. This is the International Day for Preventing the Exploitation of the Environment in War and Armed Conflict.

The calendar is a first of what we expect to be many editions. In fact, it will be constantly updated. So please send additions and corrections to info@worldbeyondwar.org.