Bombing An Afghan Watershed For Glory And Profit

by Lisa Savage, Went 2 the Bridge. 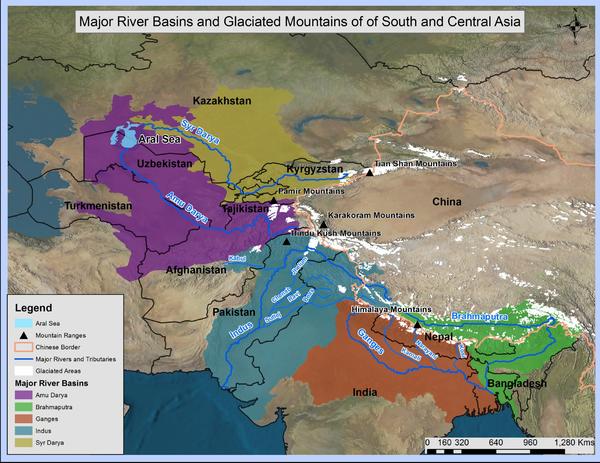 When on April 13 the Pentagon dropped a bomb with a one mile blast radius, allegedly killing zero civilians and 94 ISIS militants holed up in tunnels, here are some of the consequences:

The watershed of Kabul is heavily polluted, and the flow of ancient irrigation systems in an arid region is disrupted.

Trees growing within a 500 foot radius are flattened in the agricultural Achin district of Nangarhar province. 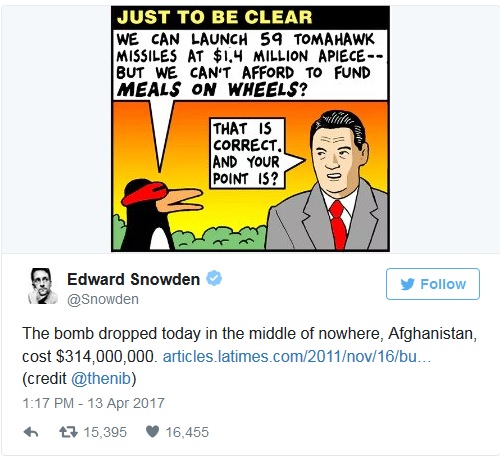 The U.S. continues a pattern of funding its own enemies in the endless “war on terror” by bombing a tunnel complex the CIA helped bin Laden build for the mujahadeen.

The demagogue with bad hair keeps one of his many campaign promises: “We’re gonna bomb the shit out of ISIS.”

The demagogue states on camera, “We are so proud of our military…We have the greatest military in the world!” but fudges when asked if he authorized use of the MOAB.

Corporate media talking heads nearly wet themselves expressing enthusiasm for a man they claim becomes more “presidential” when he orders (or maybe just observes?) airstrikes on other countries.

North Korea responds by holding a missile parade, and the corporate press claim we are on the verge of going to war with that nuclear armed nation.

The neocons who had Syria on their maps when the U.S. invaded Iraq in 2003 finally get to use a weapon developed for that conflict.

U.S. military commander in Afghanistan General Nicholson finds the courage to visit Kabul two days later, possibly for talks about bringing in more troops than the 8,000 already there in order to “break the stalemate” of that 14 year conflict.

Antiwar organizer David Swanson observes the parallels with United Airlines’ attack on a passenger, noting that if other passengers had simply blocked the aisle it would have halted the violent removal of David Dao. He then adds:

The question is whether people will sit back and take it, resist with some nonviolent skills, or disastrously resort to violence themselves.

Amen to that, brother.