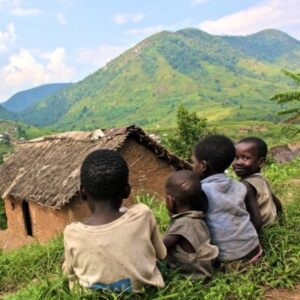 By Paul Buchheit, Nation of Change.

In-between cocktail parties at the World Economic Forum (WEF) in Davos, Switzerland, billionaires tried to solve global inequality and climate change. Most of the attendees had arrived by private jet, which can burn as much fuel in an hour as an average car does in a year.

America’s actions impact everyone in the world. But that doesn’t seem to matter to the super-rich elite who inexplicably get to make our decisions for us. They are not only far removed from ordinary people, but they’re also out-of-touch with the world around them, insulating themselves in fortified estates and bubbles of wealth like in Davos.

Only the most insensitive among us could fail to care about the people in Madagascar described by Nicholas Kristof in the New York Times.

In a Madagascar village mothers walk three hours to get water from a well, but the well has gone dry, and so they have to bring their dying cattle to sell to a man who trucks in the water. This in a land that not long ago was overflowing with farms and rivers and flowers, but has turned to desert, almost certainly due to the climate change caused by rich countries. This is where a 10-year-old girl named Fombasoa was forced to quit school to spend her days searching for wild red cactus fruit, the only source of food for her family. When the fruit is gone they eat the cactus leaves. Sometimes they take chalky rocks and break them up for soup, and sometimes they eat the ashes from old cooking fires. Fombasoa’s family is hoping to marry her off – at 10 years old – so that her new husband can provide for her. Her father is torn between the ugly reality of marrying off a child or letting her starve.

In America, a single individual accumulated enough of our country’s wealth in the past year to ensure the availability of clean drinking water for the ENTIRE WORLD. That man, Jeff Bezos, who has profited greatly from the technological infrastructure built up over many years by many people with many of our tax dollars, has spent millions of dollars on lobbyists to avoid the taxes owed by his company.

The drought in Madagascar is a result of human-caused climate change, which, according to the U.S. Geological Survey and the American Meteorological Society, has exacerbated El Niño and reduced rainfall in southern Africa.

In America, denial comes from rich and powerful people. Donald Trump said, “I’m not a big believer in man-made climate change….nobody really knows.” Charles Koch uses some of his billions to support the author of “The Moral Case for Fossil Fuels” and to fund a fossil fuel group that claims to be “standing up for poor, underserved communities” by rejecting subsidies for electric vehicles and solar panels.

In the Madagascar village, children sometimes wake up crying in the night from hunger. By the start of one recent evening two little boys – Fokondraza, 5, and Voriavy, 3 – hadn’t eaten anything all day. Their aunt boiled cactus leaves for their dinner. They have some reason for hope with the UN World Food Program providing lunches in local schools, and Catholic Relief Services offering emergency food supplies and assistance with farming. The UN Population Fund, which for nearly 50 years has helped to keep new mothers healthy, was recently defunded by Donald Trump.

In America, the portion of speculative wheat market trades by Goldman Sachs and other players quintupled between 1996 and 2011. The price of wheat went from $105 a ton in 2000 to $481 a ton in 2008. By 2014 food speculation by banks and hedge funds had again doubled.

Madagascar is the most severely affected country in the world – for THE PLAGUE … The Black Death. Today it’s called a “disease of poverty” by the World Health Organization. People in Madagascar are also at high risk for hepatitis, typhoid fever, and malaria.

In America, Silicon Valley billionaires are spending hundreds of millions of dollars to prolong their own lives. Peter Thiel, Larry Ellison, Larry Page and Sergey Brin are some of the billionaires who have invested in anti-aging science, much of it unproven – Artificial Brains, Anti-Viral, Genetics, Cryogenics. Meanwhile, it has been estimated that less than 10 percent of the budget for health research is spent on diseases that cause 90 percent of the world’s illnesses.

Is there anything we can or should do for the poorest countries in the world? We need to do LESS: fewer military bases; fewer debt-imposing ‘loans’ to vulnerable people; less Big Agriculture on lands that should be devoted to community farming.

A smaller military, less debt, cooperative farming. That’s all true whether in distant lands or right here in America.