Arms Trade: Which Countries and Companies are Selling Weapons to Israel? 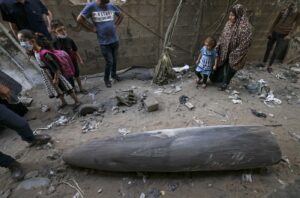 For over a week, Israel has pounded the Gaza Strip with bombs, claiming it is targeting Hamas “terrorists”. But residential buildings, book stores, hospitals and the main Covid-19 testing lab have also been flattened.

Israel’s ongoing bombardment of the besieged enclave, which has now killed at least 213 people, including 61 children, likely constitutes a war crime, according to Amnesty International.

Hamas’ thousands of indiscriminate rockets fired north from Gaza, which have killed 12 people, may also be a war crime, according to the rights group.

But while Hamas has bombs mostly put together from homemade and smuggled materials, which are dangerous because they are unguided, Israel has state of the art, precision weaponry and its own booming arms industry. It is the eighth biggest arms exporter on the planet.

Israel’s military arsenal is also propped up by imports of billions of dollars worth of weapons from abroad.

These are the countries and companies supplying Israel with weapons, despite its track record of war crimes accusations.

The United States is by far the biggest exporter of arms to Israel. Between 2009-2020, more than 70 percent of the arms Israel bought came from the US, according to the Stockholm International Peace Research Institute (Sipri) Arms Transfers database, which only includes major conventional weapons.

According to Sipri numbers, the US has exported arms to Israel every year since 1961.

It’s harder to track arms that have actually been delivered, but between 2013-2017, the US delivered $4.9bn (£3.3bn) in arms to Israel, according to the UK-based Campaign Against the Arms Trade (CAAT).

US-made bombs have been photographed in Gaza in recent days, too.

The exports have increased despite the numerous times that Israeli forces have been accused of committing war crimes against Palestinians.

The US continued to export weapons to Israel when it emerged in 2009, for example, that Israeli forces had indiscriminately used white phosphorus shells on Palestinians – a war crime, according to Human Rights Watch.

In 2014, Amnesty International accused Israel of the same charge for disproportionate attacks that killed scores of civilians in Rafah, southern Gaza. The following year, the export value of US weapons to Israel almost doubled, according to Sipri figures.

US President Joe Biden “expressed his support for a ceasefire” on Monday, under pressure from Senate Democrats. But it also emerged earlier in the day that his administration had recently approved $735m in weapons sales to Israel, the Washington Post reported. Democrats on the House Foreign Affairs Committee are expected to request the administration delay the sale pending review.

And under a security assistance agreement spanning 2019-2028, the US has agreed – subject to congressional approval – to give Israel $3.8bn annually in foreign military financing, most of which it has to spend on US-made weapons.

That’s around 20 percent of Israel’s defence budget, according to NBC, and almost three-fifths of US foreign military financing worldwide.

But the US also sometimes gives additional funds, on top of its annual contribution. It has given an extra $1.6bn since 2011 for Israel’s Iron Dome anti-missile system, with parts that are made in the US.

“Israel has a very advanced arms industry that could likely sustain the bombardment for at least a short period of time,” Andrew Smith of CAAT told Middle East Eye.

“However, its major combat aircraft come from the US,” he added, referring to US F-16 fighter jets, which continue to pummel the Strip. “Even if the capacity to build them exists in Israel, they would obviously take a long time to assemble.

“In terms of munitions, a lot of these are imported, but I’d expect they could be produced in Israel. Obviously, in this hypothetical scenario, the transition to domestically produce arms would take time and would not be cheap.”

“But arms sales should not be seen in isolation. They are underpinned by a deep political support,” Smith added. “The support of the US, in particular, is invaluable in terms of upholding the occupation and legitimising bombing campaigns like we have seen over recent days.”

The second-biggest exporter of weapons to Israel is Germany, which accounted for 24 percent of Israel’s arms imports between 2009-2020.

Germany does not provide data on the weapons it delivers, but it issued licences for arms sales to Israel worth 1.6 billion euros ($1.93bn) from 2013-2017, according to CAAT.

Sipri figures show Germany sold weapons to Israel throughout the 1960s and 1970s, and has done so every year since 1994.

The first defence talks between the two countries date back to 1957, according to Haaretz, which noted that in 1960, Prime Minister David Ben-Gurion met in New York with German Chancellor Konrad Adenauer and emphasised “Israel’s need for small submarines and anti-aircraft missiles”.

While the US has helped with many of Israel’s air defence needs, Germany still provides submarines.

Germany’s Chancellor Angela Merkel voiced “solidarity” with Israel in a call with Netanyahu on Monday, according to her spokesperson, reaffirming the country’s “right to defend itself” against rocket attacks from Hamas.

Italy is next, having provided 5.6 percent of Israel’s major conventional arms imports between 2009-2020, according to Sipri.

The two countries have done deals in recent years whereby Israel has got training aircraft in return for missiles and other weapons, according to Defense News.

Italy joined other European countries in criticising Israeli settlements in Sheikh Jarrah and elsewhere earlier in May, but the country continues to export weapons.

Port workers in Livorno refused on Friday to load a ship carrying weapons to the Israeli port of Ashdod, after being notified by Italian NGO The Weapon Watch of the contents of its cargo.

“The port of Livorno will not be an accomplice in the massacre of the Palestinian people,” the Unione Sindicale di Base said in a statement.

Weapon Watch urged Italian authorities to suspend “some or all Italian military exports to the Israeli-Palestinian conflict areas”.

AgustaWestland, a subsidiary of Italian firm Leonardo, makes components for Apache attack helicopters used by Israel, according to CAAT.

The UK, though not in Sipri’s database in recent years, also sells weapons to Israel, and has licensed £400m in arms since 2015, according to CAAT.

The NGO is calling for the UK to end weapons sales and military support to Israeli forces and investigate if UK arms have been used to bomb Gaza.

The actual amount the UK exports to Israel is far higher than publicly available numbers, due to an opaque system of weapons sales, “open licences”, basically permissions to export, which keep the value of arms and their quantities secret.

Smith of CAAT told MEE that roughly 30-40 percent of UK arms sales to Israel are likely done under open licence, but “we simply don’t know” which weapons they are or how they are used.

“Unless the UK Government launches its own investigation, then there isn’t any other way of determining which weapons have been used, other than relying on photos emerging from one of the worst conflict zones in the world – which is not an appropriate way for the arms industry to be held to account,” said Smith.

“The way we find out about these atrocities is either relying on people in war zones to be taking photos of weapons which are falling around them or on journalists,” Smith said.

“And that means that we can always assume huge amounts of weapons are used which we’ll never know about.”

One of their factories in Oldham has been a target for pro-Palestine protesters in recent months.

Many of the weapons exported by the UK to Israel – including aircraft, drones, grenades, bombs, missiles and ammunition – “are the kind of arms that are likely to be used in this sort of bombing campaign”, according to a CAAT statement, referring to the ongoing bombardment.

“It would not be the first time,” it added.

A government review in 2014 found 12 licences for arms likely used in that year’s bombardment of Gaza, while in 2010, then-Foreign Secretary David Miliband said that arms made in the UK had “almost certainly” been used in Israel’s 2009 bombing campaign of the enclave.

“We know that UK-made arms have been used against Palestinians before, but that has done nothing to halt the flow of weapons,” said Smith.

“There must be a suspension of arms sales and a full review into whether UK weapons have been used and if they are implicated in possible war crimes.”

“For decades now, successive governments have talked about their commitment to peacebuilding, while continuing to arm and support Israeli forces,” Smith added. “These arms sales do not just provide military support, they also send a clear sign of political support for the occupation and blockade and the violence that is being inflicted.”

Canada accounted for around 0.3 percent of Israel’s imports of major conventional weapons between 2009-2021, according to Sipri numbers.

Canada sent $13.7m in military hardware and technology to Israel in 2019, equating to 0.4 percent of total arms exports, according to The Globe and Mail.