An Appeal for Peace from Czechia 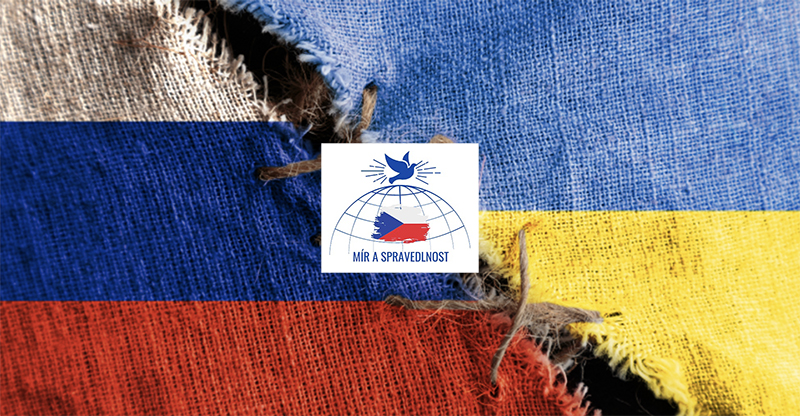 I.
After few months of war in the Ukraine it is clear that this conflict, as many others, cannot be resolved by the force of arms. Many people, soldiers and civilians, particularly the Ukrainians, are losing their lives. Many millions escaped the war beyond the boundaries of Ukraine. Families are divided, lives are interrupted and the land is devastated. Cities are turned into ruins, power stations, bridges, roads, schools and even hospitals are being destroyed through bombing. Without Western aid the Ukrainian state would have long gone bankrupt.

II.
Ukraine is bleeding. Even though there can be endless disputes about the causes of this war, it is clear that according to the international law it is Russia that bears the direct responsibility for the outbreak of this war. After the apparent and real security concerns were ignored Russia moved from conflictual and unsuccessful diplomatic negotiations to offensive military actions on the territory of Ukraine.

III.
The war in Ukraine is at the same time a struggle that transcends it: It involves the West in the form of a massive military and financial aid and sanctions it applied against Russia.

IV.
The sanctions applied by the West and particularly by the European countries failed its authors´ expectations. They did not succeed in stopping or moderating Russia´s military efforts, and they did not even significantly affect the Russia´s economy. They do, however, damage European households and firms, including the ones in the Czech Republic. Europe and particularly Czechia, is suffering from inflation, the significant cause of which is the war. Life of all of us has become more expensive and though this is not welcome for anyone, those who call for the war to continue the most are least affected by these economic developments.

VI.
An open military confrontation of the West with Russia on the territory of Ukraine is the biggest danger which goes way beyond the current economic effects of the war. The use of nuclear weapons is certainly not desired by any party of the conflict. But it is now a real threat. It is incredible to hear voices claiming that we should not be deterred by the nuclear threat.

VII.
We reject these claims. The continuation and further escalation of the war is not in the interest of anyone except that by the armaments industries, even if there are many voices that claim the opposite. The majority of wars in history did not end with a total defeat of one party and their capitulation in spite of the claims made by the pro-war opinion. The majority of wars did not end the way the Second World War ended. Usually wars end earlier with a negotiated settlement. Cries of the type such as “ make Russia withdraw and there will be peace” do not solve anything as that will  not happen.

VIII.
We have no access to the thinking of the Russian government and so we do not know what their plan is, but we do not see any plan on the side of the western, including the Czech, governments that would lead anywhere. Plan called sanctions failed. We understand that this is difficult to accept but the pretence that sanctions work does not increase the credibility of our governments´ position in the least. The plan of fighting till the last man is fanatical and unacceptable. And no other plan exists.

IX.
Therefore, it is necessary to make our government to start working not for war but for a just peace. That is what should gradually become the demand of all European governments on the governments of the USA and the Russian Federation. It is primarily their will and the decisions made by Ukraine that will be the key for the future peace negotiations. And this will not happen without us, the public putting pressure on their governments.

X.
We want just peace. Peace that will be willy nilly accepted by all the parties to the conflict, peace which will be guaranteed by all relevant parties, peace agreement the precise content of which we do not know, cannot know and shouldn´t want to know. This peace will come out of long and painful negotiations. Peace negotiations should be undertaken by politicians, their diplomats and experts. They govern and so they should act. But we demand that they should act to conclude a just peace. And they should start the process immediately and to start with aim at earliest possible armistice.

Therefore we are establishing an initiative for peace “Peace and justice” and we call on the Czech government to:

1) end its public support for war and the spreading of hate against any state or its representatives, and the suppression of opinions that are critical of the war,

2) undertake all steps leading to a speedy armistice which would include the ending of supplies of arms, followed by negotiations with the aim of creating just peace. The government should first deal with their European partners with aim of convincing the government of the US to join this negotiating process,

3) demand that other European governments in the Council of Europe undertake honest and unbiased evaluation of the affect of sanctions on the Russian economy as well as their impact on the economies and people of European countries,

4) refrain from supporting the imposition of any further sanctions until the process of evaluation of the affect of sanctions is completed (point 3), and if it is proven that the sanctions on Russia are ineffective whilst being damaging for European countries and people, demand their abolition.

5) concentrate on the amelioration of the effects of the war, inflation, increased costs and sanctions and ensure real, effective and speedy help for the people and firms in the Czech Republic.