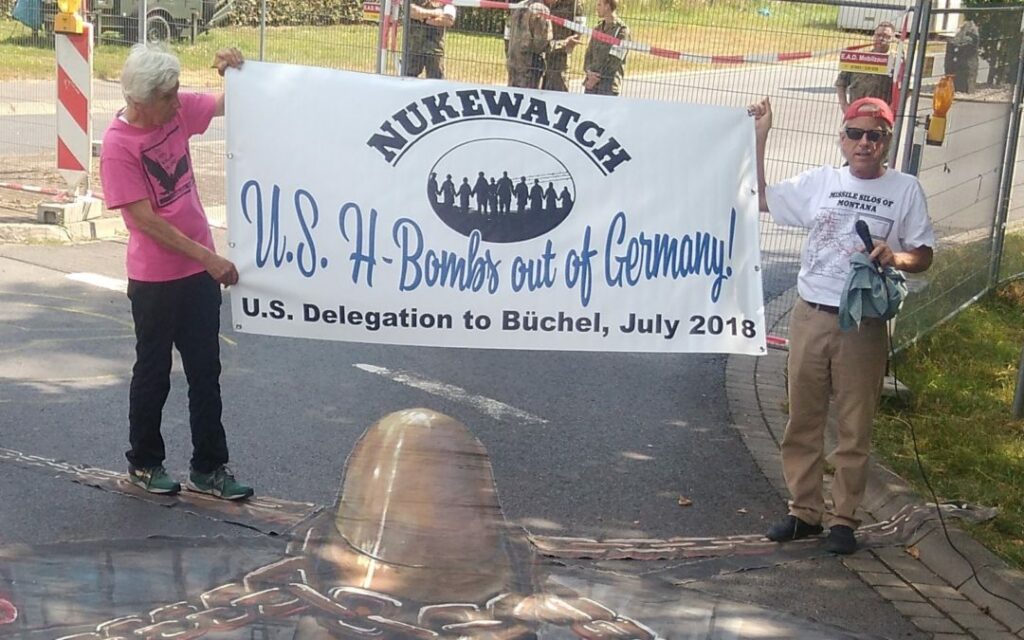 Eleven international peace activists entered the Büchel Air Base southwest of Frankfurt early this morning to deliver a self-named Treaty Enforcement Order declaring that the sharing of US nuclear weapons at the base is a “criminal conspiracy to commit war crimes.”

Upon entering the base’s main gate with a printed “cease and desist order,” insisted on seeing the base commander to deliver the order in person.

“We refuse to be complicit in this crime,” said Brian Terrell of Voices for Creative Nonviolence in Chicago, Illinois. “We call for the nuclear bombs to be returned to the US immediately. The Germans want these nuclear weapons out of Germany, and so do we.”

The group included people from Germany, The Netherlands, the United Kingdom, and the United States. All eleven were detained by military and civilian authorities and were released after providing identification.

This is the third year in a row that a delegation of US peace activists has joined Europeans and others in protesting the US nuclear weapons at Büchel. The local group Nonviolent Action for Abolition of Nuclear Weapons (GAAA) convenes the International Action Week, demanding permanent ouster of the US nuclear weapons, cancellation of plans to replace today’s B61s with new hydrogen bombs, and Germany’s ratification of the 2017 Treaty on the Prohibition of Nuclear Weapons.

“Delivery of the ‘Cease and Desist Order’ is an act of crime prevention,” said John LaForge, of the US peace group Nukewatch and coordinator of the US delegation. “The authorities think the entry is a matter of trespass. But these nuclear bomb threats violate the UN Charter, the Treaty on Nonproliferation of Nuclear Weapons, and the 2017 Treaty on the Prohibition of Nuclear Weapons.” he said, adding, “Interrupting government criminality is a duty of responsible citizenship.”

Susan van der Hijden of Amsterdam, who is just back from the US where she visited the Kansas City, Kansas site of a factory working on parts of the new replacement bomb, known as the B61-12. “The planning and training to use the US H-bombs that goes on at Büchel cannot be legal, because organizing mass destruction has been a criminal act since the Nuremberg Trials after WWII,” van der Hijden said.

You are hereby ordered to permanently cease and desist any and all deployment of nuclear weapons at the Büchel Air Base.

Under authority of the Charter of the United Nations, the International Court of Justice, 8 July 1996, and the Treaty on the Prohibition of Nuclear Weapons, all nuclear weapons currently located on the Büchel Air Base are to be removed immediately and returned to the Pantex Facility in Amarillo, Texas, in the United States of America, there to be immediately dismantled in accordance with the commitment of the United States in Article VI of the 5 March 1970 Treaty on the Nonproliferation of Nuclear Weapons.

NUCLEAR WEAPONS ARE ILLEGAL – BUECHEL IS A CRIME SCENE

For decades, the United States military has deployed its nuclear weapons on German soil. Here in Büchel, the 702nd Munitions Support Squadron is responsible for the deployment and threatened use of its “Priority Level One” stockpile of B61 gravity bombs.

We come from the United States and many other countries to the Büchel Air Base on this 10th of July 2019 to bring a halt to the ongoing criminal conspiracy to commit war crimes using these weapons of mass destruction.

Each and every B61 nuclear bomb is designed and intended to unleash uncontrollable and indiscriminate heat, blast and radiation. Therefore, any planning, preparation, possession, deployment, threat or use of any variant of the B61 nuclear bombs, as a matter of fact, violates peremptory rules of law including the laws of war, the rules and principles of humanitarian law or the Nuremberg Principles.[1] These weapons are a crime against humanity and the planet itself.

As an act of crime prevention and responsible citizenship, we are here to resist the ongoing unlawful conspiracy by the United States and German Air Forces to commit mass destruction. We are here on behalf of everyone who is unaware of the existential threat that such planning poses to life, liberty, and the planet Earth; who are unaware of the binding legal prohibitions that outlaw planning for nuclear war; or who feel powerless to take effective action against the Büchel Air Base’s criminal war planning.

We act in accordance with common humanitarian law, Treaties governing the use or threat of use of nuclear weapons, and the authoritative opinion of the International Court of Justice, which says: “The Court recognizes…that the use of nuclear weapons could constitute a catastrophe for the environment. The Court also recognizes that the environment is not an abstraction but represents the living space, the quality of life and the very health of human beings, including generations unborn. …The destructive power of nuclear weapons cannot be contained in either space or time. They have the potential to destroy all civilization and the entire ecosystem of the planet.[2]

For these reasons, guided by our conscience, the legal authority of the International Court of Justice, and the moral imperative to act residing in each person recognized by the Nuremberg principles, we call upon the personnel, powers and authorities at Büchel Air Base to take all such steps as are necessary to immediately stand down the US B61 nuclear weapons deployed there and to demand the permanent removal from sovereign German soil of these weapons of mass destruction.

Further, we call for these weapons to be returned to the United States of America from whence they came, to the Pantex facility in Amarillo, Texas, for immediate disassembly, dismantlement, and disposal.
[1] According to Professor of International Law Anabel L. Dwyer, University of Michigan: “The US, Germany and NATO know that each and every B61-3 and B61-4 nuclear bomb is designed and intended to unleash uncontrollable and indiscriminate heat, blast and radiation. The B61-3 is a 170-kiloton nuclear weapon. The B61-4 is a 50-kiloton weapon. Therefore, any planning, preparation, possession, deployment, threat or use of any variant of the B61 nuclear bomb, as a matter fact, violates peremptory rules of law including the laws of war, the rules and principles of humanitarian law or the Nuremberg Principles.”

[2] Legality of the Threat or Use of Nuclear Weapons, Advisory Opinion of 8 July 1996,
International Court of Justice, The Hague.