“A Tragic Illusion” – Did The Atom Bomb Make The United Nations Obsolete Three Weeks After Its Birth? 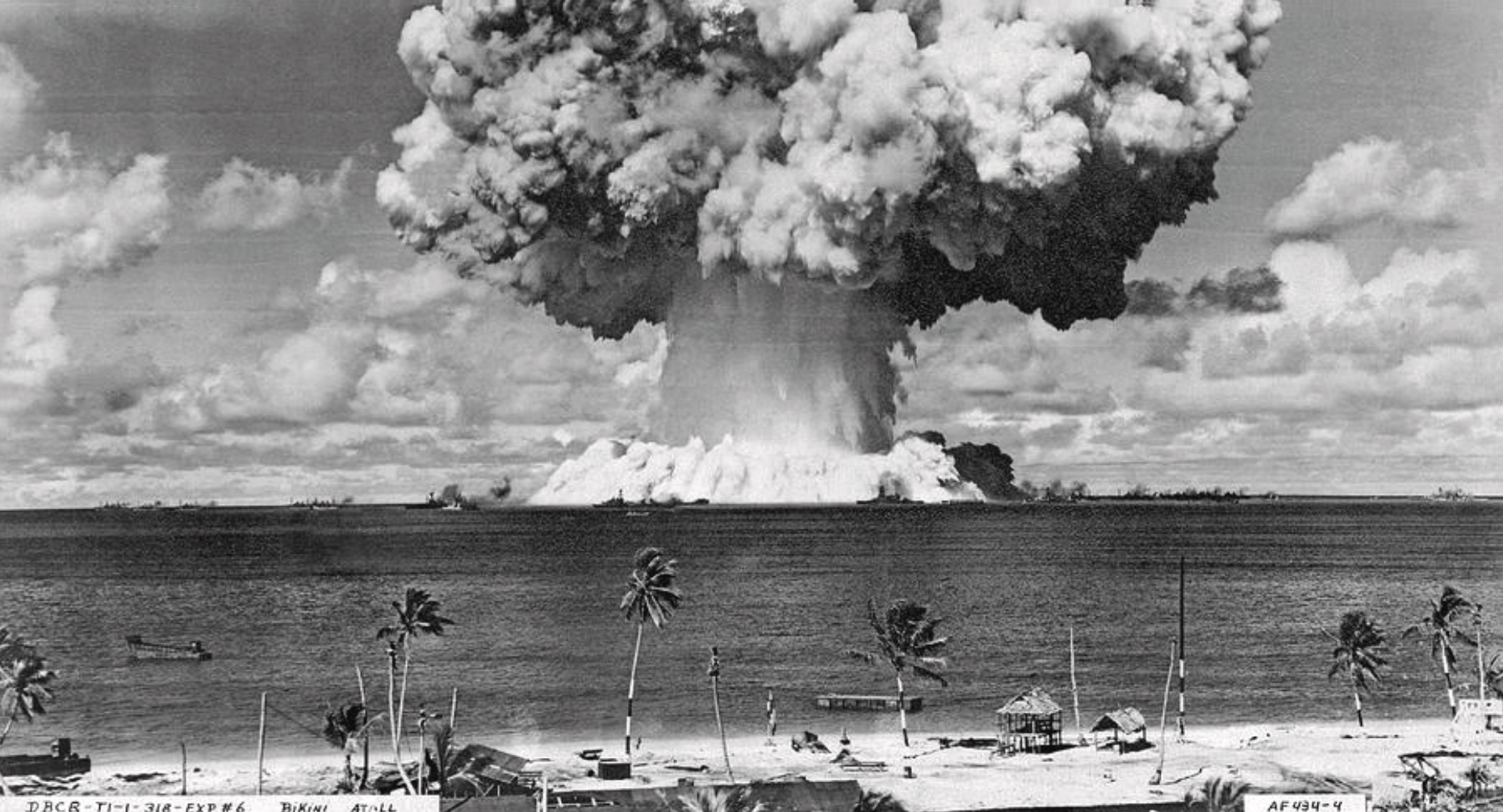 On this day 75 years ago the atomic age was born, with the first nuclear detonation near Alamogordo, New Mexico on July 16th, 1945. Only 20 days earlier, on June 26th, the United Nations had been established with the signing of the UN Charter in San Francisco. Did the bomb make the United Nations obsolete three weeks after its birth?

The single most important individual in these events, U.S. President Harry S. Truman, certainly seemed to think so. Consider the unique position of the man and the moment. Although Alamogordo was still three weeks away, Truman’s advisors had assured him by then that “success” was virtually certain. And he knew that he was the one human being on whom the yoke of decision would soon fall – regarding not only whether and how to use the ghastly new device against Imperial Japan, but what to do thereafter about the apocalyptic predicament about to descend upon all humanity.

So what did he say at the signing of the document in San Francisco?

This is only a first step to a lasting peace … With our eye always on the final objective let us march forward … This Charter, like our own Constitution, will be expanded and improved as time goes on. No one claims that it is now a final or perfect instrument. Changing world conditions will require readjustments … to find a way to end wars.

It was quite curious, to say the least, to emphasize so bluntly the shortcomings of a document less than one hour old.

Two days later, after traveling from San Francisco by train to receive an honorary degree from Kansas City University in his own hometown, President Truman’s thoughts turned to both his own burdens and that final objective. “I have a tremendous task, one that I dare not look at too closely.”  Not a single person in that audience, almost certainly, knew what he was referencing. But we can make a pretty good guess that it had something to do with the “changing world conditions” he knew were soon to come:

We live, in this country at least, in an age of law. Now we must do that internationally. It will be just as easy for nations to get along in a republic of the world as it is for us to get along in the republic of the United States. Now, if Kansas and Colorado have a quarrel over a watershed they don’t call out the National Guard in each state and go to war over it. They bring suit in the Supreme Court and abide by its decision. There isn’t a reason in the world why we can’t do that internationally.

This contrast – between the law that prevails within a society of citizens and its absence among the society of nations — was hardly original to Harry S. Truman. It had been expressed over the course of many centuries by Great Minds like Dante, Rousseau, Kant, Baha’u’llah, Charlotte Bronte, Victor Hugo, and H.G. Wells. Indeed, when Truman evoked our own Supreme Court as analogy he echoed his own predecessor, President Ulysses S. Grant, who said in 1869: “I believe that at some future day the nations of Earth will agree on some sort of congress … whose decisions will be as binding as the decisions of the Supreme Court are on us.”

Nor was it the first time it had ever occurred to Harry S. Truman. Former Brookings Institution president and U.S. Deputy Secretary of State Strobe Talbott, in his extraordinary 2008 book The Great Experiment (half memoir and half history of the world republic idea), tells us that the 33rd American president carried in his wallet the verses of Alfred Lord Tennyson of 1835: “Till the war-drum throbb’d no longer, and the battle-flags were furl’d, In the Parliament of man, the Federation of the world.” Talbott says as his wallet copy crumbled, Truman recopied these words over by hand perhaps 40 separate times throughout his adult life.

It is difficult not to conclude that at this excruciating moment of truth, unlike any before in human history, President Harry S. Truman feared the spectre of atomic war, concluded that the only solution was to abolish war, and understood that the new United Nations could not, as its Charter proclaimed, “save succeeding generations from the scourge of war.”

Flash forward a few months. Hiroshima and Nagasaki had come, a dreadful WWII had come to its end, but the ceaseless dread of an infinitely cataclysmic WWIII had only just begun. And exactly two weeks before the UN Charter came into force on October 24th, 1945, an extraordinary letter appeared in the New York Times. “The San Francisco Charter is a tragic illusion,” wrote U.S. Senator J. William Fulbright, U.S. Supreme Court Justice Owen J. Roberts, and Albert Einstein. “By maintaining the absolute sovereignty of the rival nation states, (it prevents) the creation of superior law in world relations … We must aim at a Federal Constitution of the World, a working worldwide legal order, if we hope to prevent an atomic war.”

The authors later expanded this letter, added more than a dozen other prominent signatories, and attached it to the 1945 book jacket of The Anatomy of Peace by Emery Reves. This manifesto of the world republic idea was translated into 25 languages, and likely sold more than a million copies. (Reves also served as Winston Churchill’s literary agent, and contributed to Churchill’s own advocacy for a “United States of Europe” and “a world organization of irresistible force and inviolable authority.”) Future U.S. Senator and JFK White House staffer Harris Wofford, who as an abundantly charismatic teenager founded the “Student Federalists” in 1942, told me that his cadre of young One World zealots considered Reves’s book the bible of their movement.

Flash forward once more to 1953, and the Honorable John Foster Dulles, President Eisenhower’s Secretary of State. One of the great hawks of the Cold War era. The very opposite of a utopian dreamer. He had been part of the American delegation at San Francisco as an advisor to Republican Senator Arthur Vandenberg, and had helped to craft the Charter’s stirring preamble. All of which made his verdict eight years on all the more surprising:

When we were in San Francisco in the spring of 1945, none of us knew of the atomic bomb which was to fall on Hiroshima on August 6th, 1945. The Charter is thus a pre-atomic-age charter. In this sense it was obsolete before it actually came into force. I can say with confidence that, if the delegates there had known that the mysterious and immeasurable power of the atom would be available as a means of mass destruction, the provisions of the charter dealing with disarmament and the regulation of armaments would have been far more emphatic and realistic.

Indeed, just days after the death of FDR on April 12th, 1945, Secretary of War Henry Stimson had advised the new president to postpone that San Francisco conference – until after the full consequences of the looming atom bomb could be contemplated and absorbed.

The United Nations has done a great deal of good in its 75 years. It’s provided food relief to 90 million people, distributed aid to more than 34 million refugees, carried out 71 peacekeeping missions, supervised hundreds of national elections, assisted hundreds of millions of women with maternal health, vaccinated 58% of the children in the world, and much else.

But – hot take here – it has not abolished war. Nor has it eliminated eternal arms races between major powers, the bellum omnium contra omnes described by Thomas Hobbes in his Leviathan of 1651. Laser weapons, space weapons, cyber weapons, nano weapons, drone weapons, germ weapons, artificially-intelligent robot weapons. Fast forward just to 2045, the UN at 100, and one cannot even envisage the new adjectives in front of the ancient noun. No one can doubt that humanity will continually be confronted with new and ever more frightful scenarios of doom.

Sorry what’s that? Yes, you there in the back row, speak up! For 75 years now we’ve had neither a “republic of the world” nor a nuclear war? So Truman must have been wrong? Humanity can safely dwell in a world of national rivals, you say, armed with nuclear weapons and god only knows what other weapons, and manage to dodge forever the coming of the apocalypse?

The only possible answer to that is the same one purportedly given by China’s Premier Zhou Enlai in 1971, when asked by Henry Kissinger what he thought about the consequences of the French Revolution. Mr. Zhou, the story goes, considered the question for a moment, and then replied: “I think it is too soon to tell.”

Tad Daley, author of the book Apocalypse Never: Forging the Path to a Nuclear Weapon-Free World from Rutgers University Press, is Director of Policy Analysis at Citizens for Global Solutions.