A Giant Raptor Fueled by Oil Circles the Earth 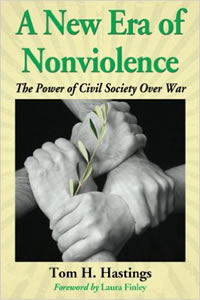 To the genre of war abolition treatises that everyone should read add A New Era of Nonviolence: The Power of Civil Society Over War by Tom Hastings. This is a peace studies book that truly crosses over into the perspective of peace activism. The author addresses positive trends with neither rose- nor red-white-and-blue-colored glasses. Hastings isn’t just after peace in his heart or peace in his neighborhood or bringing the good word of peace to the Africans. He actually wants to end war, and thus includes an appropriate — by no means exclusive — emphasis on the United States and its unprecedented militarism. For example:

“In a positive feedback loop of negative consequence, the race for the world’s remaining fossil fuels will produce more conflict and require ever more fuel to win the race . . . ‘[T]he U.S. Air Force, the world’s single largest consumer of petroleum, recently announced a plan to substitute 50 percent of its fuel use with alternative fuels, with particular emphasis on biofuels. Yet, biofuels will be able to supply no more than roughly 25 percent of motor fuel [and that’s with stealing land needed for food crops –DS] . . . so other regions where oil supplies are available will likely see greater military investment and intervention.’ . . . With the growing scarcity of oil reserves the U.S. military has entered an Orwellian era of permanent war, with hot conflict in multiple countries constantly. It may be thought of as a giant raptor, fueled by oil, constantly circling the Earth, seeking its next meal.”

A lot of people in favor of “peace,” just like a lot of people in favor of protecting the environment, do not want to hear that. The U.S. Institute of Peace, for example, may be thought of as a wart on the beak of the giant raptor, and would — I think — see itself sufficiently in those terms to object to the preceding paragraph. Hastings, in fact, illustrates well how Washington, D.C., thinks of itself by quoting a fairly typical comment, but one already proven flawed by well-known events. This was Michael Barone of US News and World Report in 2003 before the attack on Iraq:

“Few in Washington doubt that we can occupy Iraq within a few weeks’ time. Then comes the difficult task of moving Iraq toward a government that is democratic, peaceful, and respectful of the rule of law. Fortunately, smart officials in both the Defense and State departments have been doing serious work planning for that eventuality for over a year now.”

So, not to worry! This was an open public statement in 2003, like many others, yet the fact that the U.S. government was planning to attack Iraq for over a year before that continues to be “breaking news!” right up through this week.

That wars can be prevented even in the United States is clear to Hastings who would agree with Robert Naiman’s recent objection when CNN suggested that having opposed the Contra war on the government of Nicaragua should disqualify someone from running for U.S. president (particularly someone standing next to a shameless warmonger who voted for the war on Iraq). In fact, Hastings points out, huge efforts by the peace movement in the United States at the time very likely prevented a U.S. invasion of Nicaragua. “[H]igh ranking U.S. officials with access to [President Ronald] Reagan and his cabinet were speculating that invading Nicaragua was almost inevitable — and . . . it never occurred.”

Hastings examines causes of war outside of the Pentagon as well, tracing, for example, infectious disease back to the common cause of poverty, and noting that infectious disease can lead to xenophobic and ethnocentric hostility that leads to war. Working to eliminate disease can therefore help to eliminate war. And of course a small fraction of the cost of war could go a long way toward eliminating diseases.

That war need not be the result of conflict is clear to Hastings who recounts excellent models such as the popular resistance in the Philippines from the mid-1970s to mid-1980s. In February 1986 a civil war began. “The people interposed between two armies of tanks in a remarkable four-day nonviolent mass action. They stopped an emerging civil war, rescued their democracy, and did all this with zero mortalities.”

A danger lurks in the growing recognition of the power of nonviolence that I think is illustrated by a quote from Peter Ackerman and Jack Duvall that I’m afraid Hastings might have included without any sense of irony. Ackerman and Duvall, I should mention, are not Iraqi and at the time of making this statement had not been deputized by the people of Iraq to decide their fate:

“Saddam Hussein has brutalized and repressed the Iraqi people for more than 20 years and more recently has sought to acquire weapons of mass destruction that would never be useful to him inside Iraq. So President Bush is right to call him an international threat. Given these realities, anyone who opposes U.S. military action to dethrone him has a responsibility to suggest how he might otherwise be ushered out the back door of Baghdad. Fortunately there is an answer: Civilian-based, nonviolent resistance by the Iraqi people, developed and applied with a strategy to undermine Saddam’s basis of power.”

By this standard, any nation possessing weaponry of use only for foreign wars should by default be attacked by the United States as an international threat, or anyone opposing such action must demonstrate an alternative means of overthrowing that government. This thinking brings us CIA-NED-USAID “democracy promotion” and “color revolutions” and the general acceptance of provoking coups and uprisings “nonviolently” from Washington. But are Washington’s nuclear weapons useful to President Obama inside the United States? Would he be right then in calling himself an international threat and attacking himself unless we could show an alternative means of overthrowing himself?

If the United States were to stop arming and funding some of the worst governments on earth, its “regime change” operations elsewhere would lose that hypocrisy. They would remain hopelessly flawed as undemocratic, foreign-influenced democracy-creation. A truly nonviolent foreign policy, in contrast, would neither collaborate with Bashar al Assad on torturing people nor later arm Syrians to attack him nor organize protesters to resist him nonviolently. Rather, it would lead the world be example toward disarmament, civil liberties, environmental sustainability, international justice, fair distribution of resources, and acts of humility. A world dominated by a peace maker rather than a war maker would be far less welcoming for the crimes of the Assads of the world.