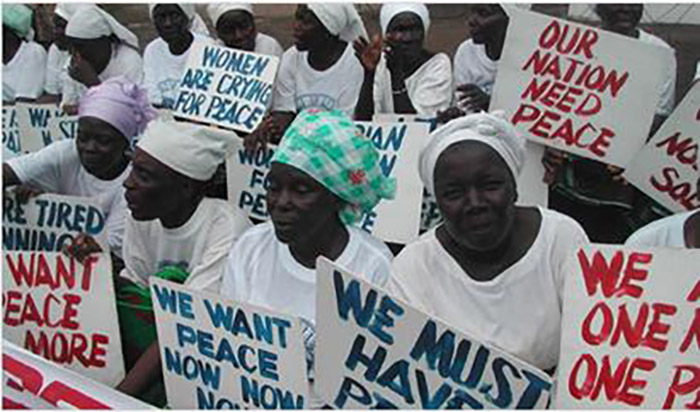 “Why, sometimes I’ve believed as many as six impossible things before breakfast.” —Lewis Carroll

It’s supposed to not exist. An alternative to mass killing.

In cases that call for war, other options cannot be considered. Otherwise, how would one justify wars?

So, how can it be that I’ve listed below 89 times that people were simply forced to choose war or to “Do Nothing,” and they chose something else entirely?

Studies find nonviolence more likely to succeed, and those successes longer lasting. Yet we’re told over and over again that violence is the only option.

Had violence been the only tool ever used, we could obviously try something new. But no such imagination or innovation is required. Below is a growing list of successful nonviolent campaigns already used in situations in which we’re often told war is needed: invasions, occupations, coups, and dictatorships.

We have not sought to filter the list for the duration or goodness of the success or for the absence of malign foreign influences. Like violence, nonviolent action can be used for causes good, bad, or indifferent, and generally some combination of those. The point here is that nonviolent action exists as an alternative to war. The choices are not limited to “do nothing” or war.

This fact does not, of course, tell us what any individual should do in any situation; it tells us what any society is free to attempt.

Considering how frequently the existence of nonviolent action as a possibility is categorically denied, the length of this list below is rather staggering. Perhaps climate denial and other forms of anti-scientific rejections of evidence should be joined by nonviolent-action denial, as the latter is clearly a disastrous phenomenon.

Of course, the fact that there are always alternatives to war even once a war has begun is no reason not to create the sort of world in which wars are not created, and no reason not to work to prevent wars that others are planning and scheming to create long before they reach the point of actual conflict.

● 2022 Nonviolence in Ukraine has blocked tanks, talked soldiers out of fighting, pushed soldiers out of areas. People are changing road signs, putting up billboards, standing in front of vehicles, and getting bizarrely praised for it by a U.S. President in a State of the Union speech. A report on these actions is here and here.

● 2020s In Colombia, a community has claimed its land and largely removed itself from war. See here, here, and here.

● 2020s In Canada, indigenous people have used nonviolent action to prevent the armed installation of pipelines on their lands.

● 2020, 2009, 1991, Nonviolent movements have prevented the creation of a NATO military training ground in Montenegro, and removed U.S. military bases from Ecuador and the Philippines.

● 2014-15 In Burkina Faso, people nonviolently prevented a coup. See account in Part 1 of “Civil Resistance Against Coups” by Stephen Zunes.

● 2011 Over many years, leading up to 2011, nonviolent activist groups in the Basque region of Spain played the leading role in eliminating the terrorist attacks of Basque separatists — notably not through a war on terrorism. See “Civil Action Against ETA Terrorism in Basque Country” by Javier Argomaniz, which is Chapter 9 in Civil Action and the Dynamics of Violence edited by Deborah Avant et alia. It may also be worth noting that on March 11, 2004, Al Qaeda bombs killed 191 people in Madrid just before an election in which one party was campaigning against Spain’s participation in the U.S.-led war on Iraq. The people of Spain voted the Socialists into power, and they removed all Spanish troops from Iraq by May. There were no more foreign terrorist bombs in Spain. This history stands in strong contrast to that of Britain, the United States, and other nations that have responded to blowback with more war, generally producing more blowback.

● 2011 Maldivians demand resignation of the president.

● 2008 In Ecuador, a community has used strategic nonviolent action and communication to turn back an armed takeover of land by a mining company, as shown in the film Under Rich Earth.

● 2007 Nonviolent resistance in Western Sahara has forced Morocco to offer an autonomy proposal.

● 2005 In Lebanon, 30 years of Syrian domination was ended through a large-scale, nonviolent uprising in 2005.

● 2003 Example from Liberia: Film: Pray the Devil Back to Hell. The Liberian Civil War of 1999-2003 was ended by nonviolent action, including a sex strike, lobbying for peace talks, and the creation of a human chain surrounding the talks until they were completed.

● 2000s: community efforts in Budrus to resist the construction of the Israeli separation barrier in the West Bank through their lands. See the film Budrus.

● 1999 Surinamese protest against president creates elections that oust him.

● 1997 New Zealand Peacekeepers with guitars instead of guns succeeded where armed peacekeepers had repeatedly failed, in ending war in Bougainville, as shown in the film Soldiers without Guns.

● 1992 In Thailand a nonviolent movement undid a military coup. See account in Part 1 of “Civil Resistance Against Coups” by Stephen Zunes.

● 1991 In the Soviet Union in 1991, Gorbachev was arrested, tanks sent to major cities, media shut down, and protests banned. But nonviolent protest ended the coup in a few days. See account in Part 1 of “Civil Resistance Against Coups” by Stephen Zunes.

● 1988-89 Solidarność (Solidarity) brings down the communist government of Poland.

● 1987 In the first Palestinian intifada in the late 1980s to early 1990s, much of the subjugated population effectively became self-governing entities through nonviolent noncooperation. In Rashid Khalidi’s book The Hundred Years’ War on Palestine, he argues that this disorganized, spontaneous, grassroots, and largely nonviolent effort did more good than the PLO had done for decades, that it unified a resistance movement and shifted world opinion, despite co-option, opposition, and misdirection by a PLO oblivious to the need to influence world opinion and utterly naive about the need for applying pressure on Israel and the United States. This contrasts sharply with the violence and the counterproductive results of the Second Intifada in 2000, in the view of Khalidi and many others.

● 1987-91 Lithuania, Latvia, and Estonia freed themselves from Soviet occupation through nonviolent resistance prior to the USSR’s collapse. See the film Singing Revolution.

● 1987 People in Argentina nonviolently prevented a military coup. See account in Part 1 of “Civil Resistance Against Coups” by Stephen Zunes.

● 1986-94 U.S. activists resist the forced relocation of over 10,000 traditional Navajo people living in Northeastern Arizona, using the Genocide Demands, where they called for the prosecution of all those responsible for the relocation for the crime of genocide.

● 1977-83 In Argentina, Mothers of the Plaza de Mayo campaign successfully for democracy and the return of their “disappeared” family members.

● 1978-82 In Bolivia, people nonviolently prevent a military coup. See account in Part 1 of “Civil Resistance Against Coups” by Stephen Zunes.

● 1968-69 Pakistani students, workers, and peasants bring down a dictator.

● 1968 When the Soviet military invaded Czechoslovakia in 1968, there were demonstrations, a general strike, refusal to cooperate, removal of street signs, persuasion of troops. Despite clueless leaders conceding, the take-over was slowed, and the credibility of the Soviet Communist Party ruined. See account in Chapter 1 of Gene Sharp, Civilian Based Defense.

● 1961 In Algeria in 1961, four French generals staged a coup. Nonviolent resistance undid it in a few days. See account in Chapter 1 of Gene Sharp, Civilian Based Defense. Also See account in Part 1 of “Civil Resistance Against Coups” by Stephen Zunes.

● 1944 Two Central American dictators, Maximiliano Hernandez Martinez (El Salvador) and Jorge Ubico (Guatemala), were ousted as a result of nonviolent civilian insurrections. Source. The overthrow of the military regime in El Salvador in 1944 is recounted in A Force More Powerful.

● 1940s In the final years of German occupation of Denmark and Norway during WWII, the Nazis effectively no longer controlled the population.

● 1940-45 Nonviolent action to save Jews from the Holocaust in Berlin, Bulgaria, Denmark, Le Chambon, France and elsewhere. Source.

● 1933-45 Throughout World War II, there were a series of small and usually isolated groups that used nonviolent techniques against the Nazis successfully. These groups include the White Rose and the Rosenstrasse Resistance. Source.

● 1923 When French and Belgian troops occupied the Ruhr in 1923, the German government called on its citizens to resist without physical violence. People nonviolently turned public opinion in Britain, the U.S., and even in Belgium and France, in favor of the occupied Germans. By international agreement, the French troops were withdrawn. See account in Chapter 1 of Gene Sharp, Civilian Based Defense.

● 1920 In Germany in 1920, a coup overthrew and exiled the government, but on its way out the government called for a general strike. The coup was undone in five days. See account in Chapter 1 of Gene Sharp, Civilian Based Defense.

● 1917 The February 1917 Russian Revolution, despite some limited violence, was also predominantly nonviolent and led to the collapse of the czarist system.

● 1905-1906 In Russia, peasants, workers, students, and the intelligentsia engaged in major strikes and other forms of nonviolent action, forcing the Czar to accept the creation of an elected legislature. Source. See also A Force More Powerful.

● 1879-1898 Maori nonviolently resisted British settler colonialism with very limited success but inspiring others over the decades to follow.

● 1765-1775 The American colonists mounted three major nonviolent resistance campaigns against British rule (against the Stamp Acts of 1765, the Townsend Acts of 1767, and the Coercive Acts of 1774) resulting in de facto independence for nine colonies by 1775. Source. Also see here.

● 494 BCE In Rome, plebeians, rather than murder consuls in an attempt to correct grievances, withdrew from the city to a hill (later called “the Sacred Mount”). There they remained for some days, refusing to make their usual contributions to the life of the city. An agreement was then reached pledging significant improvements in their life and status. See Gene Sharp (1996) “Beyond just war and pacifism: nonviolent struggle toward justice, freedom and peace.” The Ecumenical Review (Vol. 48, Issue 2).