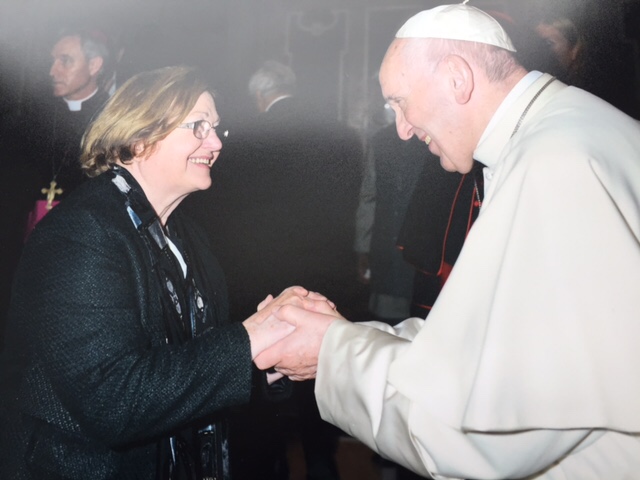 On Friday 10th November, 2017 Pope Francis will grant a Papal Audience to  Religious and Political Dignitaries from around the World, including Secretary General UN, and 5 Nobel Peace Laureates.Mairead Maguire, Ireland, who will address the Coference, before leaving  Belfast said:

‘Pope Francis has been active in promoting peace and the ban on all nuclear weapons, and the Popes message to the United Nations conference, (New York 27th 3lst March, 2017) to negotiate a legally binding instrument to prohibit nuclear weapons, leading towards their total elimination, has given great hope and inspiration to all of us working for disarmament and peace.’

Maguire  said ‘Pope Francis gives great moral and spiritual Leadership to the world in his clear message against nuclear weapons and war, and for peace and diplomacy.  Humanity is tired of weapons militarism  and war  and Pope Francis’ unambiguous rejection of violence finds resonance in the human hearts of many people.  Believing passionately in peace, and working for Peace, makes Peace possible.’

Mairead’s full speech can be read below:

THE PEACE PROCESS IN NORTHERN IRELAND

It is good to be with you all, and  I would like to take this opportunity to thank you  for your work for Peace and Humanity.

Thank you also for giving me the opportunity to speak about the Peace Process in N. Ireland.

N.Ireland is a deep ethnic/political conflict, and Religion plays both a negative and positive role in our society.  This was brought home to me, when in the early l970s a young Irish Republican  man, told me he was in the Armed Struggle of the IRA  fighting a Just War and that the Catholic Church blesses  “Just Wars“.    We need to throw out the Just War theory, a phony piece of morality. Instead we can  develop a new Theology of Peace and Nonviolence and articulate  a clear unambiguous rejection of violence.  Religion cannot be used to justify war or armed struggle.

There are many lessons to be learned from the Northern Irish conflict.   One lesson is that  violence never works, be it State, Relational,  Paramilitary violence, or the violence of sectarianism, discrimination or injustice.  For many years these  methods were used and they plunged our country    (one and a half million people) into the darkness of death and further segregation and polarization.   A Light in the darkness came when in l976 thousands of people, 90% women, marched to call for an end to violence and for peace.  They called for all inclusive, unconditional talks, including with those using violence, insisting we must talk to our perceived enemies, be reconciled together and find solutions. They insisted the UK Government uphold Human Rights and International Laws and not put aside the Rights of people, or use means which were  illegal and counter-productive.  In the first few months of this Civil Society movement for peace and reconciliation, there was a 70% drop in violence.

After a long process of dialogue, and diplomacy,  across the communities, between people, paramilitary groups, and politicians, mediated by Civil Community and members of Clergy, eventually a Good Friday Agreement was reached in l998.  This Agreement, based on Power Sharing between the Unionists, Nationalists, and others, was a ground breaking achievement in that it brought together many Political parties and tackled hard issues.  Unfortunately, many of the Policies agreed upon were not fully implemented and continue to cause dissention within our Executive, Assembly and Community.  What could have been set up was an independent body charged with the implementation of the Agreement whose recommendations for resolving disputes would be binding on the parties.  In the absence of this, the Executive is obliged to address every crisis on a case by case basis and with no commitment to accepting recommendations to resolve the crisis.

Unfortunately our Executive has had many problems working on a power sharing basis but it is hoped that as time goes on they will adopt a more co-operative and compromising approach in working these institutions.  For many the key to progress lies with the community where people live their daily lives.  The integration of our society is very important and integrated Education, Peace Education,  Therapy, Counselling,  etc., will be ways in which to heal and reconcile our society.   At the heart of a peace culture is a recognition that every persons life and their humanity is more important than a persons ethnic inheritance.  This peace culture only develops when every citizens humanity is valued above that citizens ethnic/religious  inheritance. Where a citizens’ vote is sought and cast on the basis of human worth rather than on perceived inheritance or identity.  Enpowering local grassroots communities, including women and youth,  to get involved in community peacebuilding, job creating, etc., will give hope and build self-belief,  confidence and courage.

Post conflict we know how long and difficult the task before us.    We accept this challenge to change ourselves and deepen our virtues of compassion, empathy, love, so necessary to change our society.  Seeing the person in every one and  loving and serving them will help us transcent selfishness, bigotry and sectarianism.  Deepening our relationships, with family, friends, society,  will keep us strong and give us wisdom and courage in the hard times.  In a spirit of enjoyment and enthusiasm, aware of the beauty  of life, creation, within and without,  we can live joyfully each moment and celebrate  the gift of being alive.

We join with everyone around the world to build a demilitarized peaceful world.   We thank Pope Francis for his clear moral/spiritual leadership in calling for the abolition of the death penalty and Nuclear Weapons.  It is an illusion that we are in control and that these weapons give us security.  Above all for any of us to harbour the thought that we have the right to use nuclear weapons and commit genocide is the most disturbing thing of all.  We have yet to learn the lessons of Hiroshima and Nagasaki.  An apology to the Japanese people by the US Government, those responsible  for the genocidal act of using Nuclear bombs will help the healing of relationships and ensure such genocidal acts will never happen again.   The policy of Nuclear weapons, show that we have lost our moral compass.   It is long overdue that we abolish nuclear weapons and put resources, human and financial, into abolishing poverty and meeting human security as set out in UN Development goals.

However, we need to do more than this.  Be brave and imaginative.  Join together for a common vision – the total abolition of Militarism and war.  We do not need to limit ourselves to civilizing and slowing down militarism, (which is an aberation and system of dysfunction), but demand its total abolition.  We can offer a new hope to suffering humanity.  Follow the vision of Nobel on global co-operation  to remove the scourge of  militarism and war, and implement the architecture of peace based on Human Rights and International Law.

People are tired of armaments and war, which release uncontrollable forces of tribalism and nationalism.  These are dangerous and murderous forms of identity and above which we need to transcend, lest we unleash further  violence upon the world.  Acknowledge that our common humanity and human dignity is more important than our different religions and traditions. Recognize our life and the lives of others are sacred and that we can solve our problems without killing each other.   Accept and celebrate diversity and otherness.  Heal the old divisions and misunderstandings.  Give and accept forgiveness and choose love, nonkilling and nonviolence as ways to solve our problem.

Peace and Justice are necessary, and the ways of dialogue and diplomacy must be seriously undertaken, must be insisted upon by the International Community, as shown in the Iranian nuclear deal, and as could work for a North Korean Peace Treaty.   We can transform the erroneous mindset that violence and threats of violence works, weapons and war can solve our problems. Punative Policies do not bring peace.

We can take courage and confidence,  from the fact that the Science of War, is  being replaced by a Global Science of Peace based on love, Harmony, reverence for life and creation.   Thank you to Pope Francis and the Vatican Dicastery for Promoting  Integral Disarmament.  Your work of diplomacy, mediation, fearlessly speaking Truth to Power whatever the cost, gives hope to all of humanity. 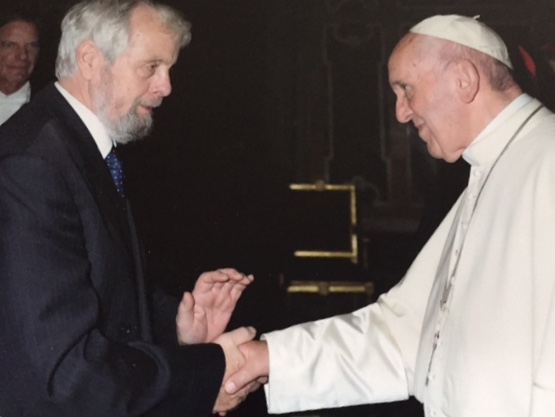