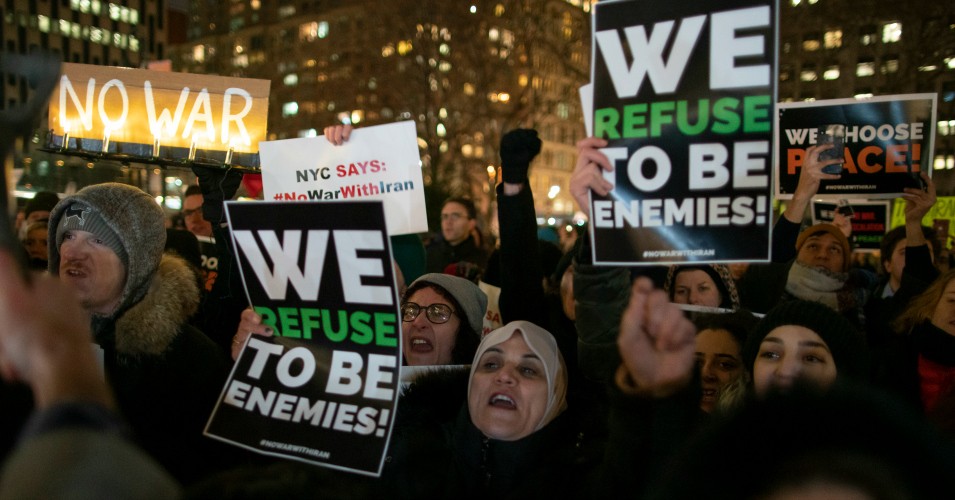 The U.S. assassination of General Qassem Soleimani has not yet plunged us into a full-scale war with Iran thanks to the Iranian government’s measured response, which demonstrated its capabilities without actually harming U.S. troops or escalating the conflict. But the danger of a full-blown war still exists, and Donald Trump’s actions are already wreaking havoc.

The tragic crash of the Ukranian passenger jet that left 176 dead may well be the first example of this, if indeed it was shot down by a jittery Iranian anti-aircraft crew who mistook the airliner for a U.S. warplane.

0.5. Large numbers of human beings may be killed, injured, traumatized, and made homeless, although most of them won’t be from the United States.

1. The first result of Trump’s blunders may be an increase in U.S. war deaths across the greater Middle East. While this was avoided in Iran’s initial retaliation, Iraqi militias and Hezbollah in Lebanon have already vowed to seek revenge for the deaths of Soleimani and the Iraqi militia. US military bases, warships and nearly 80,000 U.S. troops in the region are sitting ducks for retaliation by Iran, its allies and any other group that is angered by U.S. actions or simply decides to exploit this U.S.-manufactured crisis.

The first U.S. war deaths after the U.S. airstrikes and assassinations in Iraq were three Americans killed by Al-Shabab in Kenya on January 5th. Further escalation by the U.S. in response to Iranian and other attacks on Americans will only exacerbate this cycle of violence.

2. U.S. acts of war in Iraq have injected even more volatility and instability into an already war-torn and explosive region. The U.S. close ally, Saudi Arabia, is seeing its efforts to solve its conflicts with Qatar and Kuwait thrown into jeopardy, and it will now be harder to find a diplomatic solution to the catastrophic war in Yemen–where the Saudis and Iranians are on different sides of the conflict.

Soleimani’s murder is also likely to sabotage the peace process with the Taliban in Afghanistan. Shiite Iran has historically opposed the Sunni Taliban, and Soleimani even worked with the United States in the aftermath of the U.S. overthrow of the Taliban in 2001. Now the terrain has shifted. Just as the United States has been engaging in peace talks with the Taliban, so has Iran. The Iranians are now more apt to ally with the Taliban against the United States. The complicated situation in Afghanistan is likely to draw in Pakistan, another important player in the region with a large Shiite population. Both the Afghan and Pakistani governments have already expressed their fears that the US-Iran conflict could unleash uncontrollable violence on their soil.

Like other short-sighted and destructive U.S. interventions in the Middle East, Trump’s blunders may have explosive unintended consequences in places most Americans have not yet even heard of, spawning a new string of U.S. foreign policy crises.

3. Trump’s attacks on Iran may actually embolden a common enemy, the Islamic State, which can take advantage of the chaos created in Iraq. Thanks to the leadership of Iran’s General Soleimani, Iran played a significant role in the fight against ISIS, which was almost entirely crushed in 2018 after a four-year war.

Soleimani’s murder may be a boon to the ISIS remnants by stoking anger among Iraqis against the group’s nemesis, the Americans, and creating new divisions among the forces–including Iran and the United States–that have been fighting ISIS. In addition, the U.S.-led coalition that has been pursuing ISIS has “paused” its campaign against the Islamic State in order to get prepared for potential Iranian attacks on the Iraqi bases that host coalition troops, giving another strategic opening to the Islamic State.

4. Iran has announced it is withdrawing from all the restrictions on enriching uranium that were part of the 2015 JCPOA nuclear agreement. Iran has not formally withdrawn from the JCPOA, nor rejected international supervision of its nuclear program, but this is one more step in the unraveling of the nuclear agreement that the world community supported. Trump was determined to undermine the JCPOA by pulling the U.S. out in 2018, and each U.S. escalation of sanctions, threats and uses of force against Iran further weakens the JCPOA and makes its complete collapse more likely.

5. Trump’s blunders have destroyed what little influence the U.S. had with the Iraqi government. This is clear from the recent Parliamentary vote to expel the U.S. military. While the U.S. military is unlikely to leave without long, drawn-out negotiations, the 170-0 votes (the Sunnis and Kurds didn’t show up), along with the huge crowds that came out for Soleimani’s funeral procession, show how the general’s assassination has rekindled enormous anti-American sentiment in Iraq.

The assassination has also eclipsed Iraq’s burgeoning democracy movement. Despite savage repression that killed more than 400 protesters,  young Iraqis mobilized in 2019 to demand a new government free of corruption and of manipulation by foreign powers. They succeeded in forcing the resignation of Prime Minister Adil Abdul-Mahdi, but they want to fully reclaim Iraqi sovereignty from the corrupt U.S. and Iranian puppets who have ruled Iraq since 2003. Now their task is complicated by U.S. actions that have only strengthened pro-Iranian politicians and parties.

6. Another inevitable consequence of Trump’s failed Iran policy is that it strengthens conservative, hard-line factions in Iran. Like the U.S. and other countries, Iran has its own internal politics, with distinct points of view. President Rouhani and Foreign Minister Zarif, who negotiated the JCPOA, are from the reform wing of Iranian politics that believes Iran can and should reach out diplomatically to the rest of the world and try to resolve its long-standing differences with the U.S.  But there is also a powerful conservative wing that believes the U.S. is committed to destroying Iran and will therefore never fulfill any commitments it makes. Guess which side Trump is validating and strengthening by his brutal policy of assassinations, sanctions and threats?

Even if the next U.S. president is genuinely committed to peace with Iran, he or she may end up  sitting across the table from conservative Iranian leaders who, with good reason, will not trust anything U.S. leaders commit to.

The killing of Soleimani  has also stopped the popular mass demonstrations against the Iranian government that began in November 2019 and were brutally repressed. Instead, people now express their opposition toward the U.S.

7. Trump’s blunders may be the last straw for U.S. friends and allies who have stuck with the U.S. through 20 years of inflammatory and destructive U.S. foreign policy. European allies have disagreed with Trump’s withdrawal from the nuclear deal and have tried, albeit weakly, to save it. When Trump tried to assemble an international naval task force to protect shipping in the Strait of Hormuz in 2019, only the U.K., Australia and some Persian Gulf states wanted any part of it, and now 10 European and other countries are joining an alternative operation led by France.

At a January 8 press conference, Trump called on NATO to play a greater role in the Middle East, but Trump has been blowing hot and cold on NATO–at times calling it obsolete and threatening to withdraw. After Trump’s assassination of Iran’s top general, NATO allies began withdrawing forces from Iraq, signaling that they do not want to be caught in the crossfire of Trump’s war on Iran.

With the economic rise of China, and Russia’s renewed international diplomacy, the tides of history are shifting and a multipolar world is emerging.  More and more of the world, especially in the global south, sees U.S. militarism as the gambit of a fading great power to try to preserve its dominant position in the world. How many chances does the U.S. have to finally get this right and find a legitimate place for itself in a new world that it has tried and failed to smother at birth?

8. U.S. actions in Iraq violate international, domestic and Iraqi law, setting the stage for a world of ever greater lawlessness. The International Association of Democratic Lawyers (IADL) has drafted a statement explaining why the U.S. attacks and assassinations in Iraq do not qualify as acts of self-defense and are in fact crimes of aggression that violate the UN Charter. Trump also tweeted that the U.S. was ready to hit 52 sites in Iran, including cultural targets, which would also violate international law.

Members of Congress are incensed that Trump’s military attacks violated the U.S. Constitution, since Article I requires congressional approval for such military actions. Congressional leaders were not even made aware of the strike on Soleimani before it occurred, let alone asked to authorize it. Members of Congress are now trying to restrain Trump from going to war with Iran.

Trump’s actions in Iraq also violated the Iraqi constitution, which the U.S. helped to write and which forbids using the country’s territory to harm its neighbors.

9. Trump’s aggressive moves strengthen the weapons makers. One U.S. interest group has a bipartisan blank check to raid the U.S. Treasury will and profits from every U.S. war and military expansion: the military-industrial complex that President Eisenhower warned Americans against in 1960. Far from heeding his warning, we have allowed this behemoth to steadily increase its power and control over U.S. policy.

If we let the military-industrial complex get its war on Iran, it will drain billions, maybe trillions, more from the resources we so desperately need for healthcare, education and public services, and only to make the world an even more dangerous place.

10. Any further escalation between the U.S. and Iran could be catastrophic for the world economy, which is already riding a roller-coaster due to Trump’s trade wars. Asia is especially vulnerable to any disruption in Iraqi oil exports, which it has come to depend on as Iraq’s production has risen. The larger Persian Gulf region is home to the greatest concentration of oil and gas wells, refineries and tankers in the world.  One attack already shut down half of Saudi Arabia’s oil production in September, and that was only a small taste of what we should expect if the U.S. keeps escalating its war on Iran.

Trump’s blunders have placed us back on the path to a truly catastrophic war, with barricades of lies blocking every off-ramp. The Korean, Vietnam, Iraq and Afghanistan Wars have cost millions of lives, left the U.S.’s international moral authority in the gutter and exposed it as a warlike and dangerous imperial power in the eyes of much of the world.  If we fail to haul our deluded leaders back from the brink, an American war on Iran may mark the ignominious end of our country’s imperial moment and seal our country’s place among the ranks of failed aggressors whom the world remembers primarily as the villains of human history.

Alternatively, we, the American people, can rise up to overcome the power of the military-industrial complex and take charge of our country’s destiny. The anti-war demonstrations that are taking place around the country are a positive manifestation of public sentiment. This is a critical moment for the people of this nation to rise up in a very visible, bold and determined groundswell to stop the madman in the White House and demand, in one loud voice: NO. MORE. WAR.

Medea Benjamin, co-founder ofCODEPINK for Peace, is the author of several books, includingInside Iran: The Real History and Politics of the Islamic Republic of Iran andKingdom of the Unjust: Behind the U.S.-Saudi Connection.

Nicolas J. S. Davies is an independent journalist, a researcher forCODEPINK, and the author ofBlood on Our Hands: The American Invasion and Destruction of Iraq.